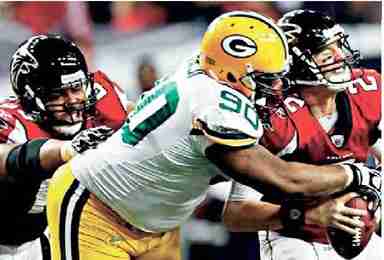 FLOWERY BRANCH, Ga. — The high- scoring offenses of the Atlanta Falcons and Green Bay Packers appear poised to provide a memorable send-off for the Georgia Dome.

Factor in the teams’ leaky defenses, and Sunday’s NFC championship game could surge past the unusually high over/under of 60½ points set by the Westgate Las Vegas Superbook.

The Falcons led the NFL in scoring . Even so, they know it won’t be easy to keep up with the scoring pace set by quarterback Aaron Rodgers and the Packers.

“It’s obvious they’ve got a stud at quarterback,” Falcons left tackle Jake Matthews said Tuesday. “We’ve played a lot of great teams with great players at quarterback. … Whatever it takes, we just have to put up as many points as we need to.”

Matthews said the weekly message from offensive coordinator Kyle Shanahan is “I don’t know if we’re going to have to win 6-3 or 40-37.”

Of those alternatives, 40-37 appears to be the more likely target, in part because the Atlanta and Green Bay defenses don’t dominate the statistics like their offensive counterparts.

Shanahan is a leading candidate in the San Francisco 49ers’ coaching search.

The game will be the Falcons’ farewell to the Georgia Dome, which will be demolished in the offseason. The Falcons will move into the $1.5 billion Mercedes- Benz Stadium next season.

The Falcons and Packers finished the regular season ranked 28th and 31st, respectively, in pass defense. The Falcons allowed 25.4 points per game to rank 27th, only a few spots below the Packers (24.2) at 21st.

The Falcons advanced with a 36-20 divisional playoff win over Seattle last week. Green Bay’s offense also rolled in a 34-31 win over Dallas.

Despite the unimpressive season totals, Atlanta allowed fewer than 20 points in four of its last six regular-season games. But none of those games were against Rodgers.

The Falcons have faced Russell Wilson, Cam Newton and Drew Brees in their past three games.

Asked who compares with Rodgers, Falcons linebacker De’Vondre Campbell had a quick answer.

“Nobody. It’s just that simple,” Campbell said. “The things that he can do, it’s just amazing to see. There’s no one I can compare him to.”

The Falcons are led by MVP candidate Matt Ryan , the All-Pro who ranked second in the NFL in yards passing and TD passes. Atlanta’s offense featured depth, as Ryan threw scoring passes to a record 13 players during the season, and balance with running back Devonta Freeman and Tevin Coleman.

Atlanta’s offense provides nice support for its defense, but cornerback Jalen Collins insisted Tuesday he doesn’t want to have to rely on that strength.

“You don’t go in the game thinking you’re going to give up hundreds of yards and a bunch of points,” Collins said. “We’re looking forward to trying to limit the points as best we can and give our offense an opportunity to put points on the board.”

Falcons cornerback Robert Alford said expectations for a high-scoring game gives the defense reason “to have a chip on our shoulders.”

Added Alford: “We’re all going to have something to prove. I love it.”