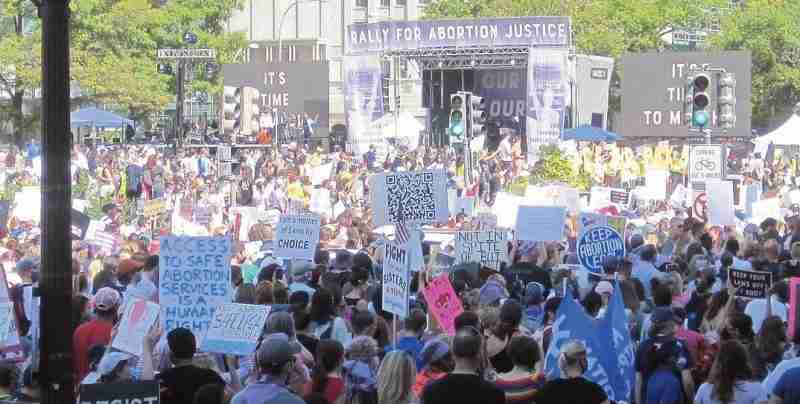 In what can only be called one of the most consequential leaks of a generation, documents circulated late Monday revealed the United States Supreme Court is set to overturn abortion rights when the ofﬁcial decision is announced within the next two months. The landmark Supreme Court decision in 1973, Roe v. Wade, that cleared the path for women across the country to obtain safe and legal abortions and became one of the hallmarks of the women’s rights movement, has been a contentious political topic for decades since and anti-abortion organizations have successfully lobbied legislation in various states across the country to restrict or narrow abortion access and services. This has led to a bitter and inimical battle between the two popular political parties in this country, Democrats and Republicans, and contemptible public clashes instigated by factions known as “pro-life” against supporters of abortion rights, or “pro-choice.” These clashes have become violent over the years, and deadly. Abortion clinic bombings, and the shooting deaths of abortion providers, and clinic employees have peppered the landscape of anti-abortion activism that sought to limit or curtail the right or ability of a woman to seek reproductive services based solely upon her right to make decisions regarding her healthcare.

In the leaked documents obtained by Politico, which is unprecedented in the history of this judicial juggernaut institution, Justice Samuel Alito states unequivocally that “we hold that Roe and Casey (Planned Parenthood v Casey, another Supreme Court case in 1992 that upheld the Roe v. Wade 1973 decision) must be overruled. The Constitution makes no reference to abortion, and no such right is implicitly protected by any constitutional provision.” Then, taking an obvious swing at the justices who sat on the same bench of justice almost 50 years ago, Justice Alito opines that “Roe was egregiously wrong from the start. Its reasoning was exceptionally weak, and the decision has had damaging consequences. Roe and Casey have enflamed debate and deepened division.” What makes this leaked initial draft opinion interesting is how Justice Alito argues the validity of the Roe v Wade ruling by making the inference that the constitution does not acknowledge nor mention medically induced gestational termination, nor is it found within the Constitutional amendments, therefore laying the ground work to suggest that the justices who presided initially over the case of Roe v Wade, overstepped the provisions of the Constitution and formed an opinion that was, in essence, unconstitutional, in making the argument in support of abortion rights, thereby establishing a precedent. Alito then does a deep dive into the usage of the 14th Amendment to argue for the right to seek an abortion. The 14th Amendment is chiefly known as one of the amendments drafted during the period of Reconstruction. Reconstruction was an important time frame after the Civil War and the 14th Amendment was crafted to help integrate formerly enslaved African Americans into society, conferring all the rights and privileges that come with being an American citizen for the ﬁrst time, setting a framework that would, in theory, successfully unite White Americans or former slave owners with their newly released “property” or subservient class of human beings under the Constitution to form a balanced and “more perfect Union” and in turn, cripple White supremacy. Of course, the 14th Amendment would be proven ineffective and dead weight for African Americans when Reconstruction was quickly decimated and they were returned to third-class citizen status, or pre–Civil War stature.

The 14th Amendment states in Section 1 that “no state shall make or enforce any law which shall abridge the privileges or immunities of citizens of the United States, nor shall any state deprive any person of life, liberty, or property without due process of law.”

Justice Alito surmises that those who would argue that a woman’s right to make medical decisions regarding her body by using the later sentence of Section 1 of the Fourteenth Amendment, “nor shall any state deprive any person of life, liberty, or property without due process of law,” with the primary emphasis on the word and deﬁnition of ‘liberty,’ are leaping to unfounded and unjustiﬁable conclusions. Alito posits that before attaching the word “liberty” to abortion rights, “we must ask what the 14th Amendment means by the term ‘liberty.” When we engage in that inquiry in the present case, the clear answer is that the 14th Amendment does not protect the right to abortion.” In the 98-page initial majority opinion, Justice Alito lamented that the Roe v. Wade decision is “faulty” and by overturning Roe, the highest court in the land comprised of the majority Republican nominated justices, Clarence Thomas, Amy Coney Barrett, Neil Gorsuch, and Brett Kavanaugh, are intent on “setting the record straight.”

Using American colonial law as a witness, and a foundational pillar in his opinion, Justice Alito attempts to dissect the criminality of abortion by referencing decisions dating back to 1692 that in effect made abortions a crime. Alito also opined about the 1848 Mitchell v. Commonwealth case where the court ruled that “the law should punish abortions and miscarriages willfully produced at any time of gestation” which states across the country will be gearing up to enforce once the Supreme Court overturns Roe v. Wade this summer. The rollback will trigger states that already have antiabortion laws on their books with provisions to ban and criminalize abortions if the Supreme Court overturns Roe to act, and encourage Republican-led states who have abortion restrictions without the ban caveat to draft legislation that will effectively ban all abortions and possibly contraceptives that are considered or deﬁned as an abortive method. Proponents of legalized abortion acknowledged that the victims of this possible Supreme Court ruling overturning Roe could very well be economically deprived women, and women of color.

Late Monday the reaction to the leaked initial majority draft authored by Justice Samuel Alito was met with swift outrage by abortion rights activists and supporters. Former Secretary of State Hillary Clinton said in a statement that “this decision is a direct assault on the dignity, rights, & lives of women, not to mention decades of settled law. It will kill and subjugate women even as a vast majority of Americans think abortion should be legal. What an utter disgrace.”

Sen. Mitt Romney (R-Utah) said “if the leaked draft opinion reflects the ﬁnal outcome, it is a decision I support. The sanctity of human life is a foundational American principle. Laws regarding abortion would now be returned to the people and their elected representatives.” Sen. Bernie Sanders (I-Vt.) tweeted Monday that “Congress must pass legislation that codiﬁes Roe v. Wade as the law of the land in this country NOW. And if there aren’t 60 votes in the Senate to do it, and there are not, we must end the ﬁlibuster to pass it with 50 votes.”

President Joe Biden conﬁrmed Tuesday that the leaked Supreme Court initial draft is indeed authentic and that when, and if, the ﬁnal decision is handed down over the summer, it will be met with ripple effects that will have far reaching consequences. “If this decision holds, it’s really quite a radical decision," Biden told reporters. "It goes far beyond the concern of whether or not there is a right to choose. It goes to other basic rights." In an ofﬁcial statement released before the Biden Administration received conﬁrmation that the leaked 98-page opinion was real, President Biden remarked “if the Court does overturn Roe, it will fall on our nation’s elected ofﬁcials at all levels of government to protect a woman’s right to choose. And it will fall on voters to elect pro-choice ofﬁcials this November.”