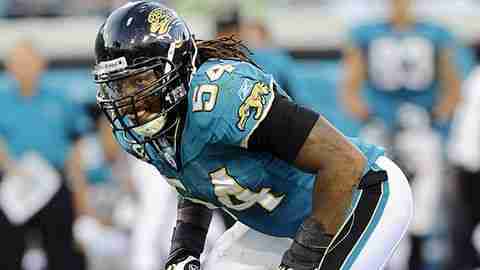 JACKSONVILLE, Fla. (AP) _ Mike Peterson got chills as he walked onto the practice field to start training camp Friday.

And that was before fans gave him a warm reception.

Peterson, a former NFL linebacker who spent a chunk of his 14-year career in Jacksonville, is back with his former team as one of four intern coaches during camp. Longtime Jaguars fullback Greg Jones is another, along with Troy defensive line coach Bam Hardmon and Princeton assistant Leon Wright.

For Peterson and Jones, it was a familiar _ yet vastly different _ territory.

“We’re on the other side now, so it’s not the same,” Peterson said. “But just walking out here still makes you want to strap it up.”

Peterson spent six years (2003-08) in Jacksonville, starting 73 games and recording 543 tackles, 15 sacks and eight interceptions. He also spent his first four NFL seasons (1999-2002) in Indianapolis and his last four (2009-12) in Atlanta. That’s where he met current Jaguars general manager Dave Caldwell, who welcomed him back as an intern.

“At the end of the day, this is what I want to do,” said Peterson, who returned to his alma mater, Florida, a couple of years ago, got his college degree and now works on the Gators’ weight-training staff. “I want to be a coach, so this lets me explore my options and learn some things. I’m just trying to get my foot in the door. It’s the same way my career went. I started at the bottom and had to work my way up. I don’t know anything else.”

He picked a good place to start.

Instead of just having the interns watch and learn from a distance, Jaguars coach Gus Bradley invited them to help out on the field and in the meeting rooms as much as possible. Peterson and second-year pro Telvin Smith already have developed a rapport after just a few days, with Smith getting to Peterson for feedback after every defensive series.

“We always take the stance that we want these guys heavily involved as they get a feel for our philosophy and how things are going,” Bradley said. “My hope is that you see some of the players gravitate toward them as they learn the scheme.”

Jones hasn’t been quite as vocal with the running backs even though Bradley tried to pair him with rookie T.J. Yeldon, a second-round draft pick from Alabama.

“I’m still kind of feeling my way,” Jones said. “I don’t know my place, so I’m just sitting back and listening to the coaches. If they want me to talk to someone, I’ll go talk to them, or if I feel like I need to say something, I’ll first mention it to the running backs coach. But other than that, I just try to stay in my place. They’re getting paid to do this, and I don’t want to mess with what they’ve got going on.”

Jacksonville drafted Jones out of Florida State in the second round in 2004. He spent nine years with the Jaguars _ he was widely regarded as one of the best blockers in the league _ and one more in Houston. He retired with 913 yards rushing, 471 yards receiving, 13 touchdowns and no lost fumbles.

“It’s cool to see these guys that were such great players for the Jaguars for such a long time, to see him come full circle and getting into coaching,” longtime Jaguars place-kicker Josh Scobee said. “They earned a lot of respect from their teammates while they played, so I think they will have success at the coaching level.”

Peterson heads back to Gainesville early next week to start college camp Wednesday.

Jones, meanwhile, will be in Jacksonville for the duration of training camp before taking an assistant coaching job at a local high school.

“I’ll be here for as long as they’ll allow me,” Jones said. “I’m just trying to help and learn. There are so many things that people don’t know that goes into coaching. I’m learning that and picking up on that and sitting back and watching. It’s a great experience and something that should help down the road.”