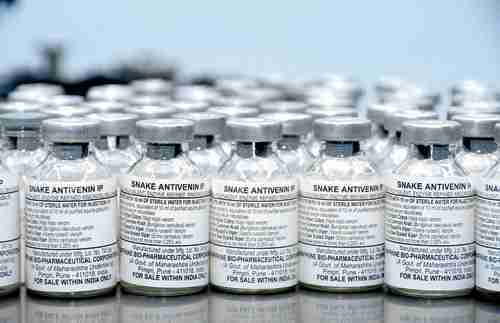 DELAND, Fla. (AP) _ Carl Barden knows what to do when a venomous snake bares its fangs.

He’s been bitten 11 times, and he understands that anti-venom can save a person’s life.

“I am living proof it works like a charm,” said Barden, who handles more than 50 snakes a day as director of the Reptile Discovery Center in DeLand.

Florida Hospital DeLand is one of three hospitals in the state testing an experimental anti-venom for coral snake bites. The brightly colored snake rarely bites, but just a drop of its venom is a lethal dose.

It can take up to 18 hours for the snake’s venom to produce symptoms, but when it does, patients can spend weeks on a ventilator and face lasting health problems if they don’t receive anti-venom promptly.

The anti-venom is in short supply because it’s not profitable for pharmaceutical companies to produce it given the small number of snake bites.

The area’s busiest emergency room at Halifax Health Medical Center would need to have the drug delivered from an anti-venom bank in Miami, said Kevin Captain, manager of the hospital’s trauma program.

While rare, Volusia County is among the top counties in the nation for coral snake bites, according to information compiled by the Florida Poison Information Center in Tampa and reports from local emergency rooms.

Nationwide, 73 coral snake bites were reported in 2013, and almost all of those likely occurred in Florida where the snake is most prominent, said Alfred Aleguas, managing director at the poison information center. The most common snake bite _ the copperhead _ accounted for more than 1,800 bites.

Most of the bites stemmed from people picking up and handling the snake, which is easily confused with the nonvenomous kingsnake, said Dr. Tracy Weiner, medical director of Florida Hospital DeLand’s emergency room.

“Maybe our patients are a little more curious about touching them. It’s more curiosity _ and maybe alcohol,” he said.

Despite the fear factor that comes along with snakes, only three snakebite deaths were recorded in 2013, according to records kept by the American Association of Poison Control Centers.

Florida Hospital DeLand had to go through an extensive approval process to become a testing site for the anti-venom. The other sites for the clinical trial are Tampa General Hospital and Lee Memorial Hospital in Fort Myers.

The snake’s rarity is one of the reasons behind the anti-venom shortage, Aleguas said.

“Getting through the manufacturing process and getting FDA (Food and Drug Administration) approval, it’s expensive,” he said. “They look at the cost benefit.”

The anti-venom has not been produced since 2003 when Wyeth Pharmaceuticals, which was acquired by Pfizer Inc., manufactured the last batch. Since then, the FDA has been testing the drug and extending its original 2008 expiration date.

Pfizer is working to produce more of the drug and hopes to have it available by next year, said Mackay Jimeson, a company spokesman.

Tampa General Hospital started the clinical trial at the end of 2013 in conjunction with the University of Arizona for an alternative drug that is produced in Mexico, and eight patients have been treated successfully, Aleguas said.

In DeLand, Barden extracts venom from coral snakes for use in anti-venom but not for the drug being tested at Florida Hospital DeLand. His facility is one of only seven of its kind in the United States.

His last bite was from a rattlesnake in 2006. He’s also been bitten by a black mamba, green tree viper and a cottonmouth.

A coral snake has never gotten him, but his former assistant was bitten, and she recovered.

“We consider them kind of innocuous,” Barden said. “They don’t want to bite. You can be standing right next to one, and he won’t try to bite you.”

Next post Ex-NFL player pleads guilty in hit-and-run, gets probation

Previous post Dara Torres back in Omaha, where her long swim career ended