S. Florida’s Charles is Journalist of the Year 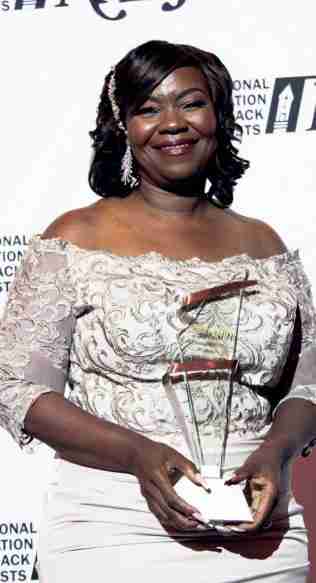 Las Vegas, Nev. – The accolades included “best of the best” … “Her stories read like novels” … “A journalist on the frontlines of history” … And, “From a presidential assassination to a devastating earthquake, Jacqueline Charles has put the needs of the people above her own personal safety.”

In honoring her as their Journalist of the Year during their annual convention, the National Association of Black Journalists said the “fearless coverage” by the Miami Herald Caribbean correspondent and South Florida Chapter member, who is of Haitian descent, “puts a human face on the modern story of Haiti,” and “has made her the go-to person for news.”

“Jackie is exactly the kind of reporter that America and the world needs right now,” said former U.S. President Bill Clinton in videotaped comments during the annual NABJ Salute to Excellence Awards Gala on Aug. 6 at Caesars Palace. “A tough professional (who) has continually tackled complex issues, to get to the heart of the matter.”

The “NABJ Baby” – the term of affection for those who grew up in the organization – was introduced to the group as a Miami Herald intern, is a graduate of the University of North Carolina at Chapel Hill, and a founding member of the North Carolina Association of Black Journalists.

As NABJ noted, since 2004 Charles has covered every major Haiti disaster from its devastating 2010 earthquake to last year’s assassination of President Jovenel Moise. Her reporting assignments have taken her throughout the Caribbean, Canada, Chile, Mexico and Texas, covering he plight of Haitian migrants.

Along the way Charles has earned recognition for her contributions to the Herald’s 2017 Panama Papers Pulitzer Prize, and the prestigious 2018 Maria Moors Cabot Prize – the oldest award in international journalism – for her coverage of the Americas.

The multilingual correspondent, previously recognized by NABJ as International Journalist of the Year for her 2008 Haiti hurricane coverage, is co-producer of the Herald’s Emmy winning Haiti documentary, “Nou Bouke,” as well as a 2011 Pulitzer Prize ﬁnalist for her Haiti earthquake coverage.

During her award acceptance remarks, Charles noted that the NABJ Awards “validate the accomplishments of journalists like myself, who put in the work, who go the extra mile, who ﬁnd the elusive source, and give life to our stories…” “NABJ, you have chosen to recognize me, my work, my talents, and my commitment, for a second time” … You have underscored the reason we do what we do. And that is, if we don’t tell the stories, who will?”

Next post Sesame Place to train workers on diversity after lawsuit