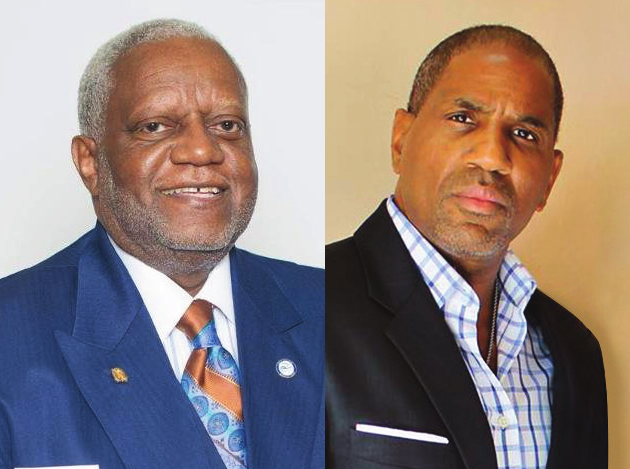 MIAMI – If they had nothing more to go on than the candidates’performance at a recent forum,voters in attendance just might select Steve Gallon III to become the next representative for the District 1 Miami Dade County School Board seat. Gallon, one of three candidates and Wilbert Tee Holloway, the district 1 incumbent, faced off at the North Dade Regional Library in Miami Gardens at a conference facilitated by the Independent Parents Council on Aug. 4. Candidate James Bush was a no show.

Standing each time he spoke and exuding the confidence and passion usually exhibited by an incumbent, Gallon shared his vision for district 1 by informing the audience of about 50 people of his 26 years of experience as an educator and pointing out that the only‘F’rated schools in Miami-Dade County are in District 1.

“Eighty eight percent of the schools in district 1 are Cs, Ds and F said Gallon,who has been endorsed by several prominent people in Miami Dade County.“I misspoke several times when I mentioned that Carol City Middle had four Fs. I was mistaken, it has five Fs. It’s on its fifth F in a row.We can do better.”

In response to the question of why he’s pursuing re-election, Holloway expressed appreciation for being able to serve and said, “I’m running to afford our children a better opportunity to equity and access to education and educational information.”

As it relates to educational equity, Gallon pointed out what he called a“juxtaposition” regarding two district 1 schools located on the same property.

Acknowledging that the district has four‘F’ schools and five‘D’schools,Holloway shifted the focus to his challenger’s tenure at Miami Northwestern Senior High, which was an ‘F’ school when Gallon was principal there for seven years.

“Somehow that information is omitted,”Holloway said.

Gallon has been endorsed by former Miami-Dade Commissioner Betty T. Ferguson, former school board representative Solomon Stinson,attorney H.T.Smith,Pastor Artie Jackson, Pastor Wayne Lomax and William ‘DC’ Clark,who told the South Florida Times Holloway“has no fight in him.If the superintendent suggests something, he doesn’t even understand how it affects his schools.”

He was careful to point out that his endorsement is a personal one not from his role as the group’s leader.

“I support Gallon because he’s a career educator. Holloway is career politician,” Clark shared.“We need an educator that understands the intricacies…going on with various school policies,contracts,etc.Gallon knows that situation like the back of his hands.”

One issue threatening to derail Gallon’s momentum is trouble he faced while a New Jersey school superintendent. Gallon was arrested on charges of “theft by deception” for lying about his residence so that children in his care could attend school in neighboring South Plainfield. He entered a Pre-Trial Intervention Program and signed a Consent Order in which he agreed to“never seek nor accept employment in any New Jersey public school or public school system.”

As it relates to concerns regarding Gallon’s New Jersey issues, Clark said he has “absolutely no problem with what he did in New Jersey. None whatsoever.”

Gallon told the South Florida Times that he would not do anything differently in New Jersey.

He stated, “I was never charged with a crime.The issue involved my two godchildren, ages six and seven, Roland and Solomon that resided with me in my residence and legally attended school in my area for a period of time.”

And although reports indicate he was banned from working as an educator there, Gallon said he was recently honored in Plainfield.

“New Jersey was a tremendous opportunity. I was just in New Jersey a month ago. I got honored in Plainfield at the school district for a school that I created that was named one of the best high schools by US News and World Report,” he said.