Book Tries to Show How US Democracy Hurt Native Americans. 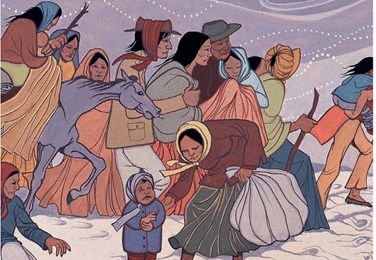 PHOTO COURTESY OF VOICE OF AMERICA

ALBUQUERQUE, N.M. (AP) _ A new book by a noted historian attempts to show how expanding American democracy hurt Native Americans in the early days of the nation and how tribes viewed the young United States as an entity seeking to erase them from existence.

University of Oregon history professor Jeffrey Ostler’s just-released “Surviving Genocide: Native Nations and the United States from the American Revolution and Bleeding Kansas” argues that the emergence of American democracy depended on the taking of Native lands.

Leaders of the fledgling nation also felt that removing Native Americans from the ancestral land – by any means necessary _ was key to allowing an expanding and poorer white population to move west, the historian writes.

Ostler said he based his book on 30 years of research by other scholars in the field of Native American studies, but wanted to do a large survey of how tribes saw the looming U.S. threat.

“If I ask my students, `Why did we have an American Revolution?’ They’ll say `Taxation without representation,”’ Ostler said. “But a very significant issue among the leaders of the American Revolution was that the British were blocking the colonists’ access to western lands.”

Future President Thomas Jefferson would even write from France that the U.S. needed a constant supply of land to grow while ignoring the people who already lived there, Ostler said.

Ostler’s book is the first of two volumes on Native American history.

The book comes as scholars and writers are challenging narratives around American history and how it hurt people of color. These efforts are drawing criticism from some conservative columnists.

Most recently, The New York Times Magazine published a series of essays called The 1619 Project earlier this month around the 400th anniversary marking the beginning of American slavery. The writers argue that African Americans were the true “perfecters of this democracy” in the U.S. by continually fighting for the nation’s ideals of equality and against the legacy of slavery.

Columbia University history professor Karl Jacoby called Ostler’s book an exciting work in Native American history. Jacoby said it would counter the romantic story portrayed in such recent books like David McCullough’s “The Pioneers: The Heroic Story of the Settlers Who Brought the American Ideal West.”

“Ostler’s book is very different and gives a much more complex and accurate story about what happened,” Jacoby said.

Ostler said he is working on finishing his second volume of “Surviving Genocide” which will cover the how Native Americans responded to attempts to remove and kill them in New Mexico, Arizona and the Pacific Northwest.