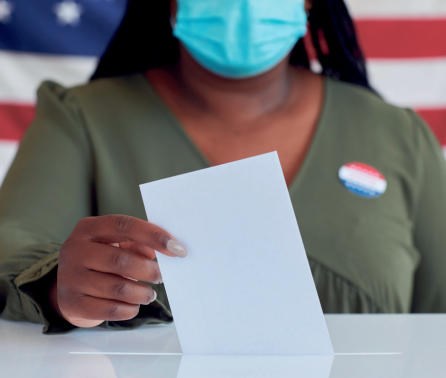 Atlanta — Civil rights groups have ﬁled a new federal lawsuit against Georgia’s sweeping law that makes it much harder for all Georgians to vote, particularly voters of color, new citizens, and religious communities.

The law being challenged is S.B. 202, which was passed by the Georgia House of Representatives and Senate and signed by Gov. Brian Kemp in under seven hours last Thursday. .

These elected ofﬁcials’ actions follow the 2020 presidential election and the 2021 runoff elections for two seats to the U.S. Senate that saw record turnout of voters, particularly Black voters, in Georgia.

The elections were celebrated not just for their turnout, but also for their integrity, with Georgia ofﬁcials praising them as safe and secure. But rather than act to expand participation in the political process, Georgia leaders responded by doing what they have done many times in the state’s history: they placed burdensome, unjustiﬁed, and unnecessary restrictions on voters, particularly voters of color and other historically disenfranchised communities.

The lawsuit challenges multiple provisions in S.B. 202, including the:

• perhaps most cruelly, ban on “line warming,” where volunteers provide water and snacks to Georgians, disproportionately those of color, who wait in needlessly long lines to cast their vote

These provisions, the lawsuit charges, violate Section 2 of the Voting Rights Act, and infringe on Georgians’ rights under the First, Fourteenth, and Fifteenth Amendments to the United States Constitution.

“This law is driven by blatant racism, represents politics at its very worst, and is clearly illegal,” said Sophia Lakin, deputy director of the ACLU’s Voting Rights Project. “We urge the court to act swiftly to strike it down.”

“Legislators and Governor Kemp ignored the very obvious lessons from the election in 2020 and runoffs in 2021: expand safe and secure access to the ballot, codify innovations to voting, and provide additional resources to cash-strapped counties,” said Nancy Abudu, deputy legal director for the SPLC. “Instead, to appease conspiracy theorists and amplify deadly lies about past elections, Georgia’s leaders have chosen to pass into law S.B. 202, which makes it more difﬁcult for every Georgian — but particularly Georgians who are members of historically disenfranchised communities — to vote in a safe, secure, and convenient manner and have that vote counted. In so doing, the defendants have violated federal law and the U.S. Constitution, and we turn to the federal courts and U.S. Congress to address the incredible harm S.B. 202 will have on our clients.”

“S.B. 202 is perhaps the most bold and shameful voter suppression legislation enacted in the modern era. Its purpose and target are clear: to create barriers to voting for Black voters who turned out in record numbers for the November 2020 presidential election and the January 2021 special election. The provisions of the new law and the manner in which it was enacted reflect a thorough disregard for the sanctity of protecting the right to vote and a headlong and determined zeal to diminish Black political power in Georgia,” said Sherrilyn Iﬁll, LDF’s president and director-counsel. “This is a powerful moment for democracy in this country. S.B. 202’s attempt to disenfranchise Black voters in Georgia harkens back to the most shameful days of voter suppression in the decades before the civil rights movement. That this law was passed in Georgia, less than a year after the death of one of the state’s greatest heroes, Representative John Lewis, is shameful. In his name, we will ﬁght to strike down this illegal attempt to undo his legacy. Anything less represents a grave threat to the future of our democracy and inherently undermines the notion of equality for all.”

“Democracy depends upon people expressing their voices freely through their votes,” said WilmerHale partner Debo P. Adegbile. “The Georgia omnibus voting obstruction law is a prime example of modern voter suppression and erodes democracy. A great deal has changed in Georgia but the commitment to brazenly disenfranchise voters clearly has not.”

“S.B. 202 attacks the most sacred foundations of our democracy. But in this country, the law secures every American citizen the equal right to make their voice heard at the ballot box, no matter who they are. And we intend to vindicate that right in court,” said Adam Sieff, attorney at Davis Wright Tremaine