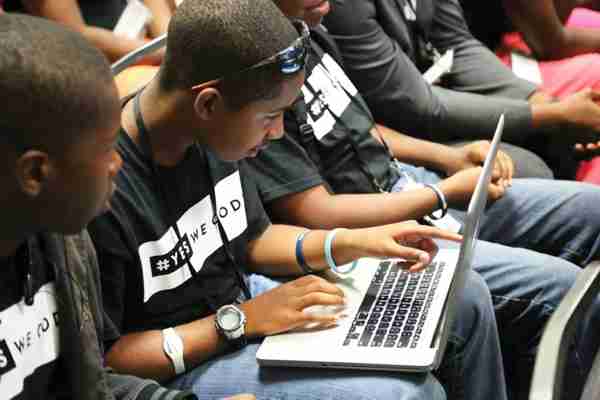 ROYAL PALM BEACH — For 12-year-old Rashad Latour of Royal Palm Beach, it was a trip he simply wasn’t interested in making. When his mother, Phara Lissade-Latour, told him that the family was going to New Orleans on a bus and were stopping along the way to various black history sites and ending up at the Essence Festival at the first ever Hackathon and Tech Village, Rashad didn’t want to go.

He was adamant about it. But so was his mom. She insisted that she, his sister Elah, 9, and he would make the trip. So they packed their bags and joined about 100 other students and chaperones on Estella’s Brilliant Bus and made the trip.

Rashad ended up taking part in the Hackathon and found himself on the winning team at the historic event.

His team devised a glucose reader that could be attached to smart phones to help diabetics monitor their glucose numbers. The invention won first place at the festival.

“It was the trip of a lifetime,” Rashad said upon returning home.

For the first time, Essence teamed up with Qeyno Labs and its co-founder, Kalimah Priforce, and “Rebuild the Dream,” organizers of the #YesWeCode hackathon.

Hackathons gather together technologists (coders), artists (designers), and problem-solvers (innovators) to build websites or mobile apps that can change the world, create a business or do both.

At the festival held July 3-6, it was the first time Essence had a Tech Village and a hackathon.

#YesWeCode is the movement to train 100,000 youths with limited access to technology on how to become world-class computer coders. Coding is the process of utilizing a program language that tells computers how to operate. Mobile apps, online games and websites are all results of people utilizing this skill.

Van Jones, a CNN Crossfire host and former advisor to President Barack Obama, is the person behind #YesWeCode. The idea is for African-American youth to write their own apps and make money off them, as other app builders do.

Students from all across the country took part in the Essence Festival hackathon. Pop superstar Prince joined the movement and gave a shout-out to #YesWeCode during his headliner concert before a crowd of 50,000. Trayvon Martin’s mother, Sybrina Fulton, stopped by the Tech Village.

Estella Pyfrom, a CNN Hero and owner of Estella’s Brilliant Bus, a Palm Beach County-based mobile computer lab on wheels that takes technology to ordinary people, was invited to take her bus and students to the event. Pyfrom, who was featured in Essence magazine last year, took 90 youths to the festival in New Orleans, stopping along the way at sites such as the Lorraine Motel in Memphis where Martin Luther King Jr. was assassinated, and at black colleges. The Disney Corporation joined them for part of the tour, filming a documentary on Estella’s Brilliant Bus.

“The trip was excellent. The kids were floored. I think it was a great tour. There was so much publicity with the kids – so many [media outlets] are now after them,” Pyfrom said in an interview from her home.

Once they were in New Orleans, the students were divided into teams to help build apps. Rashad’s team also included Henry Godbolt IV, 14, of Lake City, and Steven Lyons, 23, a student at the University of Texas at Austin. Lyons built the glucose reader and the two boys helped build the app and the website.

Each team was given mentors. Sheryl Montour, an attorney for Google in Mountain View, Calif., was a mentor to Rashad’s team. Montour said it was a pleasure working with them.

“As an attorney, I worked on ideas and advised them on legal issues to help them market their product,” Montour said in a telephone interview from California. “Rashad is interested in gaming, so he created ways for gamification and he helped create the website.”

Rashad, who will be in seventh grade in the fall, now says he couldn’t be more happy that he took the trip.

“I didn’t want to go at first because I didn’t know the benefits that would come after it. But it was one of the best trips I’ve ever been on. I learned a lot and it was a lot of fun,” he said.

Previous post Widow: $23B damages is a message to tobacco firms