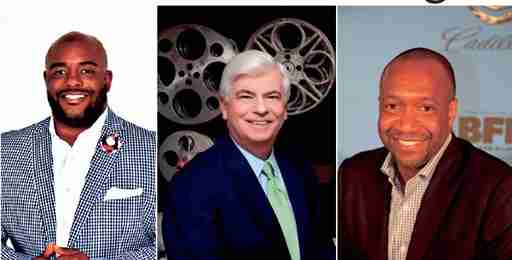 PHOTOS COURTESY OF MPAA, AND BLACKFILM.COM

MIAMI BEACH, Fla. -Turn on any television channel on virtually any night of the week, and you’re bound to catch an African American actor and/or actress in a lead or supporting role. On the big screen, diversity is also gaining steam, with blacks even starring as action heroes in blockbuster movies. The increased representation of black actors in television and film is a welcome development. And if it’s up to John Gibson, the continued diversification of the film industry will last for more than just a season.

As Advisor for Diversity and Multi-cultural Outreach where he serves as a counselor to the Chairman and CEO of the Motion Picture Association of America, former United States Senator Chris Dodd, Gibson works to promote and highlight the association’s diversity initiatives in the film and television industry.

In this role, Gibson also manages the MPAA’s partnerships with national civil rights and multicultural groups as part of the association’s outreach to leading third party organizations.

“I am the association’s liaison,” Gibson said in a telephone interview. “I also work with creators of color, African Americans, Latino, Asian Americans, the LGBT community and women with the Gina Davis Media Institute to advance our goals here, but to also highlight some of the great things our member company studios are doing.”

He said Dodd “was interested that the MPAA in its 90 year plus history did not have a formal diversity and multicultural outreach program so he established one.” Gibson said after working directly with him to create the diversity program, Dodd “threw it to me to do my thing.”

The African American Black Film Festival, founded in 1997 by Jeff Friday, “seemed the logical choice to be a strategic partner,” said Gibson, who also helps the big studios toot their horns regarding their efforts to include people of color in front of and behind the camera. “I want to commend my good friend, Jeff Friday, and everyone at the American Black Film Festival for the amazing job they have done over the past 20 years. MPAA’s ongoing partnership with the ABFF underscores my belief that our industry is best served when we present a wide array of diverse stories,” said Dodd. “Senator Dodd and the MPAA team have been wonderful partners over the past four years and have proven their commitment to supporting diversity in the motion picture industry,” said Friday. “We are excited about their expanded footprint at this year’s festival including hosting our opening night film and inaugural ABFF First Look panel series.”

Gibson said the MPAA alliance with ABFF is intentional and purposeful. “There are thousands of film festivals in the world; ABFF is the only one that MPAA is a confirmed strategic partner with. Senator Dodd believes this is a high priority for us,” he said.

The benefits of diversity have also caught the studios’ attention; primarily at the box office. “Our studios are all smart and they’re lis- tening to what people want. If nothing else, if you saw what Furious 7 did for Universal. It was the first billion dollar movie and it had a multi-cultural cast. People want to see people that look like them,” Gibson shared.

“Look at what Marvel and Disney are doing with Black Panther. Ryan Coogler, who came through the ABFF system, (is directing). You have Michael B. Jordan starring with Lupita Nyong’o. Chadwick Boseman is starring and Michael B. Jordan will probably play his nemesis in the movie,” Gibson shared, his excitement palpable. “That’s huge because that’s an action movie, a futuristic movie, and it’s not a historical piece.”

Ultimately, advocating for movies that accurately reflect the country’s true populous is Gibson’s aim. “We all learn from each other’s stories, and there’s much more that binds us than that separates us. We all have issues, whether on the job, with family members, with life and death. That’s all unique to the human experience regardless of race or cultural background. We want to make sure a wide array of stories are told – our country benefits from hearing from everyone.”