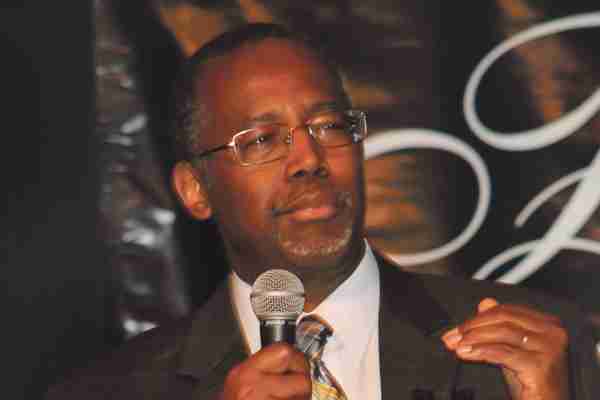 Famed retired neurosurgeon, Dr. Benjamin Carson, is being treated like a rock star by conservatives these days. Monday was no different, as a packed house of about 500 showed up at the Palm Beach County Convention Center in West Palm Beach to hear him speak and to get his latest book, One Nation, signed. Carson kicked off the speaker series as the first speaker of the season for the Forum Club of the Palm Beaches. Many turned out at the luncheon wearing “Run Ben Run” buttons, hoping to hear him say definitively that he would make a run for president in 2016. During his 15 minute speech and during a question and answer period following it, the closest he came to declaring he would run was to say that if the people wanted him to run, he would, but he has not made a decision yet. But in an exclusive interview with the South Florida Times after his book signing Monday, Carson said he would make an announcement about his candidacy in the spring. When asked if it was true that he said he is a step closer to running today than he was a year ago, he said yes. “I’m absolutely a step closer (to running,)” he said during the interview. But the conservative, who is a registered Independent, said if he runs, it would not be as a third-party candidate. Instead, he would run on the Republican ticket. Carson said he wants to gauge the outcome of the upcoming elections before he makes a firm decision. “I want to see what happens in November.” He said if Republicans and conservatism wins out in the elections in November, that would be a sign to him that conservatism is wanted by the people. That would push him even closer, giving him the boost he needs to make a firm decision. But if Democrats win overwhelmingly in November, that too, would be a sign and the people would have spoken. “Who am I to tell them anything differently, if that’s what they want?” he said.

The push for him to run for president was ignited last year when he gave a fiery speech at the 2013 National Prayer Breakfast delighting Republicans and conservatives with his rhetoric. Since then, there have been numerous websites, buttons, bumper stickers, car magnets and petitions, urging him to run. Conservatives love the fact that he has criticized the leadership in this country and that he is vehemently against the Affordable Care Act, known as “Obamacare.” He has been reported to have said that President Obama’s health care plan is “the worst thing that has happened in this nation since slavery.” On Monday, he again reiterated his disdain for the health care plan. “I am against a system that puts one’s health in someone else’s hands,” he told the crowd to a thunderous applause. But he said he has been criticized for being against “Obamacare” and accused of not wanting to help the poor get health care. “I, more than anyone, want poor people to have healthcare. But this is not the answer,” he said of the President’s plan. Instead, he advocates having a health savings account, which would pull monies from Medicare. “Individuals would have control over this account,” he said. “We need to take healthcare out of the political arena. It doesn’t belong there.”

During his engagement Monday, he was also asked about racism, gun control, medical marijuana, charter schools, childhood obesity and retirement. Speaking before an overwhelmingly Caucasian audience on Monday, the famed physician opined on racism. “Racism, you can find if that’s what you’re looking for. You tend to see what you’re looking for. Does it exist? Sure it does, for people with small minds.” As for gun control, Carson said he believes in the 2nd Amendment. “I’m a strong believer in our constitution, including our 2nd Amendment. However, we need to find ways to keep guns out of the hands of the mentally ill, and criminals without infringing on the 2nd Amendment. It’s a delicate balance,” he said.

Carson said as a brain surgeon, he is against legalizing marijuana because it “destroys the brain.” But he said using medical marijuana is okay. “We should do it in an intelligent way.” When asked about childhood obesity, Carson said parents must make sure their kids don’t sit around all day playing video games. As for charter schools, Carson said he supports them. “Why wouldn’t we support something that gives everybody a chance to succeed?” he said.

Next post Mystery shrouds US couple’s crash off Jamaica