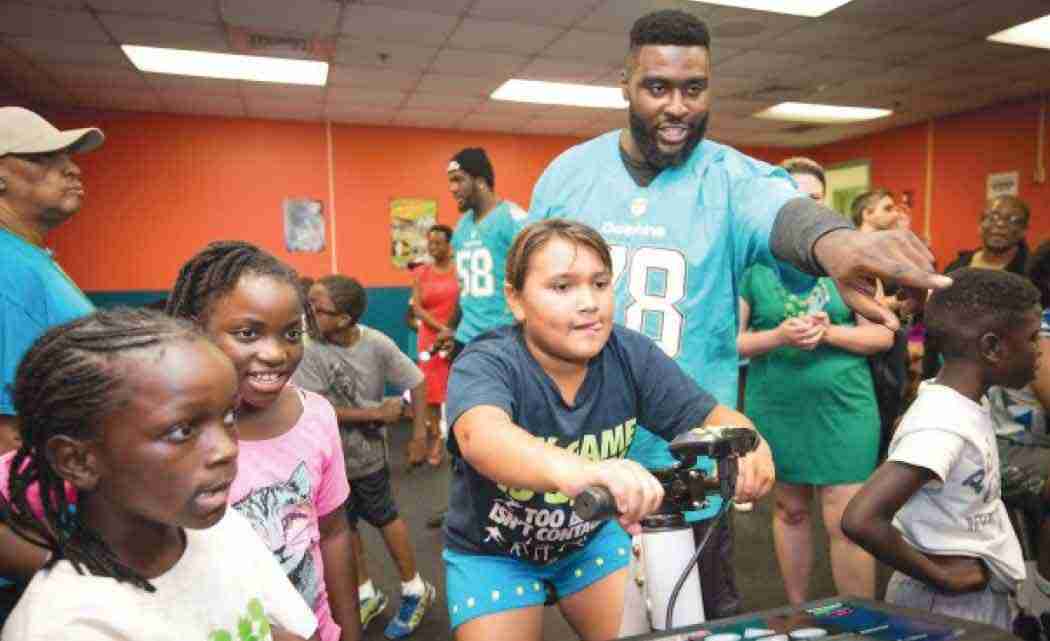 On Friday morning, the group dedicated the newly completed improvements at the NFL Y.E.T. at Gwen Cherry Park, located at 7090 NW 22nd Ave., Miami. The center, which opened in 1996, is a mainstay for residents in the neighborhood. The complex draws children and adults from outlying areas as well.

The improvements include the resurfacing of the gymnasium floor known as the “NFL Hops Exercise Floor” and a new floor covering that allows it to alternate use for non-athletic activities, such as banquets and awards presentations. In addition, the former game room has been repurposed as the new Miami Dolphins Weight and Fitness Room, the Miami Dolphins Arcade Fitness Game Room has been restored and the existing exercise equipment was refurbished. The project was made possible by a $15,000-grant from the NFL Foundation to the Gwen Cherry Park Foundation.

The game room walls are also freshly painted in the Miami Dolphins’ colors and logos, courtesy of the Miami Dolphins Special Team and other volunteers who painted them, as part of park’s annual MLK Day of Service activities in January.

“The Miami Dolphins have partnered with the NFL Youth Education Town (YET) at Gwen Cherry Park for the past 20 years. They have supported positive programs with yearly grants; the players have mentored our kids with sporting camps, fishing outings, and readings; and the cheerleaders and mascot have entertained and brought much joy to everyone. In all that they do, they are giving our children positive activities to “SAY YES” to,” said H. T. Smith, chairman of the Gwen Cherry Park Foundation.

“I am thrilled to see the new recreation amenities at the NFL Y.E.T. Center at Gwen Cherry Park. Hats off to our Parks Department’s great partner the NFL Foundation, who donated their time, talent and treasure to complete these facility upgrades,” said Miami-Dade Mayor Carlos A. Gimenez.

“This park has become one of our community’s great destinations for youth athletics and fitness,” said Chairman Monestime. “With the addition of new state-of-the-art gymnasium flooring and workout facilities, there is now more to keep everyone on the path to better health.”

“We are thankful for the facility improvements made possible by our long-standing partners the NFL Foundation. Thanks to their generosity and support, kids in this neighborhood and its surrounding schools will have new recreational activities at this park to enrich their lives,” said Miami-Dade Parks Director Jack Kardys.

The 38.5-acre Gwen Cherry Park contains three lighted multi-purpose athletic fields; two lighted basketball courts; a lighted 400-meter track; lighted baseball and softball fields; a swimming pool; an outdoor fitness gym; an outdoor fitness court; an amphitheater; a picnic area; a tot-lot; and the NFL Y.E.T. Center—also known as the National Football League (NFL) Youth Educational Town (Y.E.T.) Center—where children engage in recreational and sports programs, and after-school activities in its air-conditioned library, computer and arts-and-crafts rooms, game room, and 9,000-square-foot gymnasium for cultural, recreational and special events.  The new enhancements of a shade structure for the fitness court and new field lighting add to its list of quality amenities for the community to benefit from.

One of 260 parks within the Miami-Dade County parks system, Gwen Cherry Park is named after the first African-American woman elected to the Florida Legislature, the late Mrs. Gwendolyn Cherry.  It has been a popular gathering space for the Liberty City community, since it first opened as the park’s recreation center in 1970 and its opening as NFL Y.E.T in 1996.