Police and community interact for change 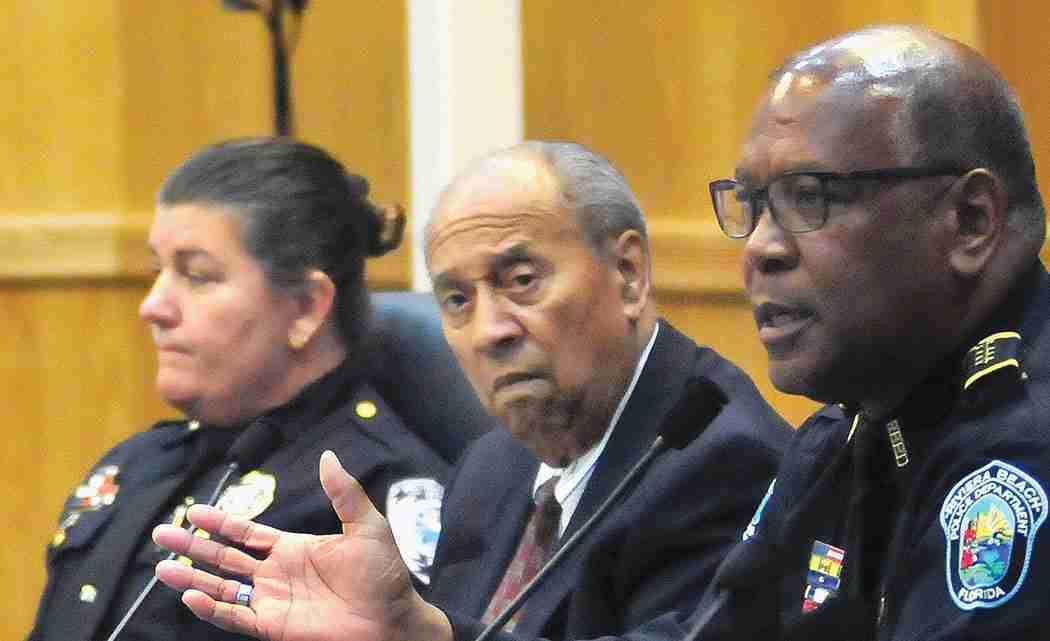 At times the rhetoric became downright heated as residents in Palm Beach County packed the County Council chambers at a Community Safety Roundtable Symposium, designed for them to express their feelings about police.  Some of the people were angry, others were mad, some were disappointed and still others were saddened over the state of affairs between the local community and police. The purpose was to hopefully be pro-active and avoid a situation like Baltimore or Ferguson, Missouri, but judging from the people’s comments, police relations in Palm Beach County are not much better than relations in those cities. And residents weren’t shy about telling the chiefs and top law enforcement officials just how they felt. The top cops got an earful.

“It’s quite obvious that you all have lost touch!” said James Howard of Riviera Beach. “The relationship is broken,” he said. The law enforcement officials sat stoic and attentive as one by one, residents like Howard took to the microphone expressing their sentiments to the panel, which was made up of top officials from various municipalities around the county.

But noticeably absent from the highly publicized event was Palm Beach County Sheriff Ric Bradshaw, who, for the past month, said he might not attend due to possible scheduling conflicts. The fact that he didn’t show up didn’t sit well with many. He sent Captain Jeffery Lindskoog and Lieutenant Terrence Carn who both said they were glad to be there. But a lot of the residents felt snubbed by the sheriff.  He should have been there, they expressed.

Chuck Ridley, 57, of Delray Beach, said Bradshaw could have sent an important message by being there, but he missed an important opportunity to show support to his community. “Law enforcement doesn’t want to be held accountable,” said Ridley. “No better example than the snubbing by the sheriff today. If our sheriff really intended to send a message to –particularly the African American community –he should have shown up,” said Ridley. “You say you’re going to send your officers to sensitivity training, but then you snub us? Really?” he asked.

Howard, who brought his nine-year-old grandson, James Howard, I,   whose father was killed due to violence in 2011, said the officers do not have their hands on the pulse of the community. “If they don’t address the subject now, then when? We voted for Sheriff Bradshaw. Ric Bradshaw needs to be here!” Howard said he wanted his grandson to be there to see firsthand if the police officials would address the needs of the people. He didn’t have much confidence. “They’re going to go back to their office and forget about this,” he said.

The officers, however, said the daylong meeting was productive. Clearly, they see a rosier picture than the residents. “We haven’t had a ‘Ferguson’ to erupt here in Palm Beach County, and that’s a testament to all of us here,” said Captain Lindskoog of the Palm Beach Sheriff’s Office. The officers were clearly on a different page than the residents. Lieutenant Carn, who mainly oversees the Sheriff’s Department in Belle Glade, said he didn’t perceive there to be a problem between community and police. Residents begged to differ. But Carn says in Belle Glade, residents call him often on his cell phone and he has a great relationship with the people in the community.

Riviera Beach Police Chief Clarence Williams, III, said the relationship between police and citizens is supposed to be a partnership. “Primarily, it’s a partnership between the community and those you can call upon for safety. Ultimately, we’re charged with providing public safety services to the citizens, but the role of law enforcement has become broader. We’re to identify the unique needs of the community and respond accordingly,” he said.

But many residents say the relationship doesn’t feel like a partnership at all. It used to, said Antonio Osborne. He told the panel, there was once a time when he could walk up to an officer and talk to him. Nowadays, he said, if he walks up to an officer, they won’t smile, won’t say hello, and will often put their hand on their weapon, as if he’s done something wrong. “As a citizen, I just want to know if we’re in partnership.  If we’re in a partnership, I should be able to talk to my partner without feeling that something’s going to happen to me,” he told the officials.

Other topics discussed included the use of body cameras, using deadly force, neighborhood policing, self-marshaling, and how to respond if stopped by an officer. The police departments represented included North Palm Beach, Boynton Beach, West Palm Beach, Riviera Beach and the Palm Beach Sheriff’s Office. Amnesty International and Catalyst for Justice were also on the panel, along with the U.S. Department of Justice Community Relations Service and retired Judge Edward Rodgers. The moderator for the event was Attorney Edwin Ferguson, founder and president of The Ferguson Firm in Riviera Beach. Ferguson kept the officers on point and held their feet to the fire.

The event was the brainchild of Palm Beach County commissioner Priscilla Taylor. She said there will be a follow-up symposium in the future.