Rally calls on community to get involved in fight against crime 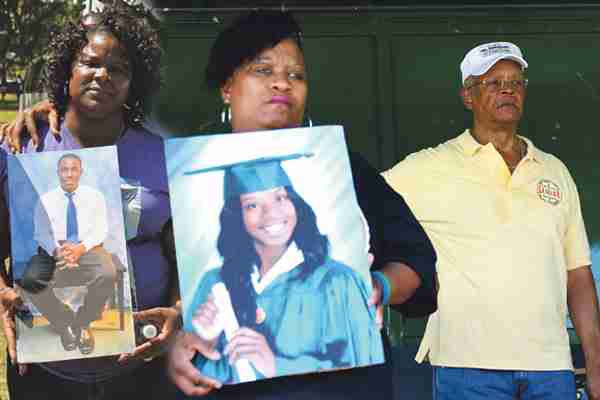 Both women have experienced what the event’s organizers hope to prevent: children being shot and killed.

Small’s son Zamari Pierre Louis, 16, was killed in January when he left home to visit “the frozen cup house,” his mother said.

Pierce’s daughter, Qualecia James, 20, was fatally shot in March while sitting in a parked car with friends. She was pregnant with a son, who died five days later.

The women joined Miami Gardens Councilmen Erhabor Ighodaro and Rodney Harris on stage at the “Stand Against Violence, It’s Our Responsibility (S.A.V.I.O.R.)” crime prevention rally on Saturday. City officials hosted the rally in partnership with Mt. Zion A.M.E. Church to encourage the community to do its part to help reduce crime and violence in the state’s largest predominantly black municipality.

The event, attended by between 80 and 100 people, also featured a unique candlelight vigil in which participants were asked to Google the word “candlelight” and hold up the image on their cellphones – all in broad daylight.

Several Miami Gardens police officers turned out and mingled with youth. The police department, which has a new chief, recently switched to a community policing approach following news reports of misconduct by some officers. The aim is to reduce the city’s high rate of violence and help residents feel more comfortable reporting crime.

Perry Anderson, a pastor’s assistant at Mt. Zion, said that he was pleased with the new approach. The former Miami police chief addressed the gathering and offered condolences to the two grieving families who were on the stage, each mother holding an enlarged photo of her child.

Smalls told the crowd that preventing violence “starts at home.” She admonished parents who look the other way when they are aware that their children own guns. “Ninety percent of these murderers live with their parents and those parents know what’s going on but they’re still holding murderers in their houses with guns and ammunition because they want to be their kids’ friend,” Smalls later told South Florida Times.

She said that prior to her son’s murder, she could not imagine the pain parents experience when a child is killed. “My whole world changed on Jan. 15,” she said, referring to the date when Zamari was shot.

Smalls said she still doesn’t know why the youngest of her three sons was killed but suggested that he was the victim of mistaken identity or was shot to satisfy some deadly requirements of gang initiation. He had no enemies, she said, because “everybody loved Zamari,” who was fond of going

Two arrests have been made in the killing of Pierce’s daughter Qualecia. She believes mistaken identity may have been behind the murder of her child whom she described as “very sweet, loving and family oriented.”

Like Smalls, Pierce said that coping with the death of her child hasn’t been easy but, instead of going to counseling, she relies on prayer.

“My three prayers [are] the serenity prayer for God to help me to accept the things that I cannot change. My second prayer was for the persons that did this to my daughter be brought to justice,” she said.

And, Pierce said, her third prayer is for the families of the persons suspected of killing James.

“Their child could get a death sentence or life sentence or sent off to prison so far away that they can’t visit them,” she said.

Pierce’s younger daughter Quatika James, 15, said that she and her sister were close, though “we fought sometimes like all sisters do.” She said that she misses Qualecia and that the family still cries a great deal.

It was important for her and her family to attend the rally to share their story, she said.

Her wish for the city of Miami Gardens?

“To stop the violence so that no one else has to go through this,” she said.