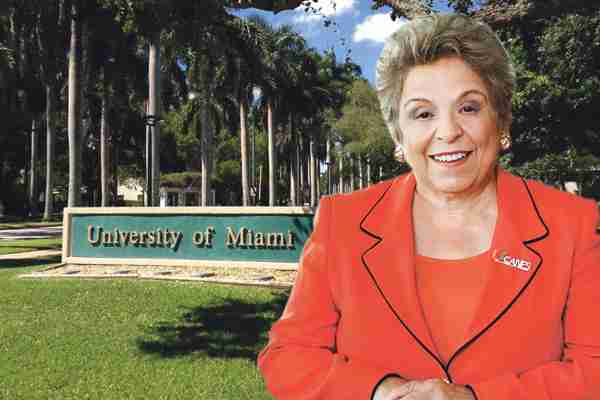 Professing her love for the institution that she has led for 14 years, University of Miami President Donna E. Shalala announced on Monday that she will leave the South Florida powerhouse next summer.

In a letter posted on the university’s website and shared with the media, Shalala, 73, informed the “University Community” of her decision to leave.

“It is with gratitude and affection for the University that I share with you my decision to step down at the end of the 2014-2015 university year. A long time ago a friend advised me to always leave a job when you still love it. That is certainly the case here,” she said. As the university’s fifth president and the first woman to hold the position, Shalala said that she accomplished what she set out to do, which was to, “…secure the University of Miami’s place as the next great American research university.”

Shalala took the reins at UM after serving in the Clinton administration as U.S. Secretary of Health and Human Services for eight years, the longest serving HHS

Secretary in U.S. history. In 2007, President George W. Bush handpicked President Shalala to co-chair with Senator Bob Dole the Commission on Care for Returning Wounded Warriors. In June of 2008, he presented her with the Presidential Medal of Freedom, the nation’s highest civilian award.

At UM, increasing diversity was a part of Shalala’s focus, and in 2013, UM boasted that 47 percent of its nearly 17,000 student body was comprised of minorities, including 26 percent Hispanic or Latino, 8 percent black, and 13 percent Asian/Pacific Islander—up from 39 percent in 2000.

Shalala’s ties to Clinton pays dividends. In 2010 the University hosted the Clinton Global Initiative, and it will do so again in March 2015—the only university to be selected twice for this honor. Clinton was also a guest lecturer in Shalala’s hugely popular political science class.

“A few years ago I visited the campus, after having not visited the campus in a while, and was so pleasantly overwhelmed by the growth and vibrancy of the campus,” said H. Leigh Toney, Executive Director of the Entrepreneurial Education Center at Miami Dade College’s North Campus; and a 1986 UM graduate. “I called several of my former UM classmates and encouraged them to reengage.”

“President Shalala created a culture of engagement with alumni and students that permeates the institution. Moreover, the value of our UM education continues to grow exponentially, as one of the Top 50 schools in the country, which is a very good thing,” said Toney, who chairs the Miami-Dade Chamber of Commerce, for which Shalala serves on the board of directors. The Chamber is charged with increasing economic and business opportunities for black businesses in South Florida.

“Having President Shalala as an active and engaged member of the Chamber provides us with a wealth of valuable resources that pays great dividends to the Chamber and its membership. President Shalala brings consistency and commitment to her Board duties and we value her many contributions,” Toney said.

Besides, steering the university to tremendous growth, Shalala also navigated the university athletics program through a scandal involving a now jailed Ponzi schemer who cozied up to the football team, racking up violations of National Collegiate Athletic Association rules.

“Our alumni, supporters, and donors have made us stronger and stuck with us through thick and thin,” Shalala said.

Shalala, whose more than 40 years of experience includes roles as Chancellor of the University of Wisconsin-Madison and President of Hunter College of the City University of New York, praised the university’s trustees for “their courage in letting me take the University on a journey of excellence that was promising, but risky. It is so easy to stand still. Pursuing greatness is not for the meek or cautious.”

Stuart A. Miller, Chair of the University’s board of trustees, said that a presidential search committee responsible for finding Shalala’s replacement will be chaired by Richard D. Fain, vice chair of the board.

“This will be an inclusive process and will seek valuable input from the greater University of Miami community,” said Miller.

“One of the best aspects of this job has been living in Miami, a community I knew only from childhood trips to visit grandparents, aunts and uncles, and cousins during the holidays. This great community is maddening, delightful, and limitless in its vitality and promise,” said Shalala, who will remain in South Florida, and return to the faculty as a professor of political science and health policy.

Michelle Hollinger can be reached at michellehollinger303@gmail.com