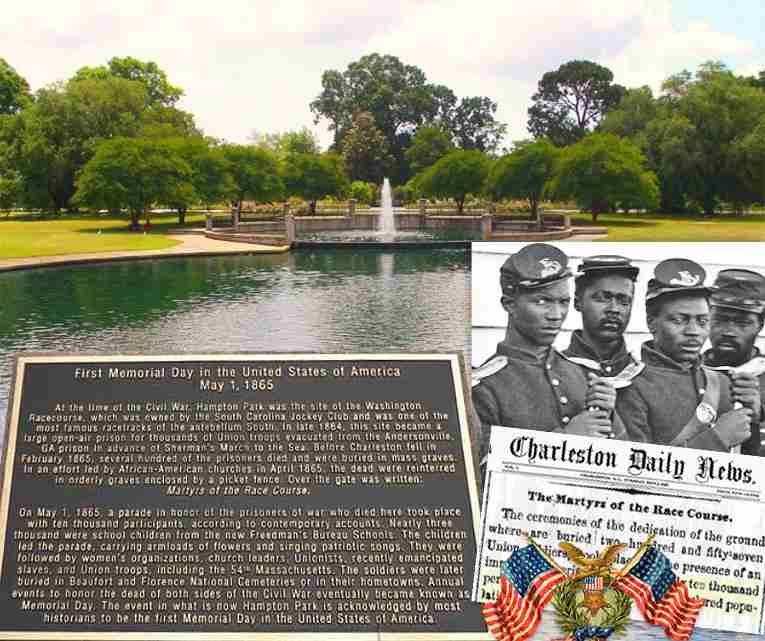 IN MEMORIAL: Plaque dedicated to the history of the first Memorial Day on May 1, 1865 in Charleston, South Carolina.

PHOTOS COURTESY OF THE CHICAGO CRUSADER

MIAMI – The last Monday in May has become synonymous with family gatherings, barbecues, partying on the beach and paying tribute to America’s fallen soldiers. Nationally, wreaths are laid at the Tomb of the Unknown Soldier at Arlington National Cemetery outside Washington, D.C. while locally, communities engage in annual events, some solemn, some far removed from memorializing and many without a clear understanding of the holiday’s purpose.

What is Memorial Day, when did it start and who created it?

A Yahoo.com response to the question said, “after the Civil War ended in 1865, many communities both north and south began holding memorial days honoring those who died.”

According to History.com, “Memorial Day is an American holiday, observed on the last Monday of May, honoring the men and women who died while serving in the U.S. military…Originally known as Decoration Day, it originated in the years following the Civil War and became an official federal holiday in 1971. Many Americans observe Memorial Day by visiting cemeteries or memorials, holding family gatherings and participating in parades. Unofficially, it marks the beginning of the summer season.”

Dig a little deeper, however, and it appears that the holiday’s origins are not so clear cut and racial elements beg the question of whether it should be referred to as “Decoration Day,” or “Memorial Day.”

Reportedly, what is now celebrated as “Memorial Day,” officially began as “Decoration Day” in an 1868 ceremony in Decatur, Illinois, when Maj. Gen. John A. Logan of the Grand Army of the Republic, a fraternal organization composed of veterans of the Union Army, called for a national day to remember the Union dead by placing flowers on their graves.

Recent years have seen debates among historians, including Yale historian David Blight, who insists the holiday has its roots in a moving ceremony held by freed slaves on May 1, 1865 at the remnants of Confederate prison camp at Charleston’s Washington Race Course and Jockey Club – now known as Hampton Park.

The “Decoration Day” ceremony is said to have been a festive event, including a parade with 10,000 people, including 3,000 flower-bearing black schoolchildren singing the Union Army’s marching song “John Brown’s Body.”

Adam Domby, assistant professor of history at CofC (College of Charleston) said whether Charleston’s Decoration Day was the first or not isn’t important. What is important, he said, is the attention Charleston’s black community paid to the nearly 260 Union troops who died at the site.

According to a report in the College of Charleston magazine, “Memorial Day Uncovered: Charleston’s ‘Martyrs of the Race Course,” former slaves and black workers were determined to honor the soldiers. They spent two weeks exhuming the soldiers’ remains from a hastily dug mass grave behind the race track’s grand stand and gave each soldier a proper burial. To protect the site, they built an arch way at the entrance that read “Martyrs of the Race Course.”

Blight discovered writings of a Union soldier at the Harvard University library that referenced the 1865 event in Charleston. Eager for more details, the Yale history professor searched the archives of the College of Charleston’s Avery Research Center for African American History and Culture, where he found a newspaper account documenting the event.

He continued his research, leading to his 2001 book, “Race and Reunion,” which included a detailed account of that 1865 Decoration Day ceremony in Charleston.

According to Domby, connections between the Charleston ceremony and the 1868 Decoration Day in Illinois have been debated; with some people insisting there are no direct links between the two ceremonies.

He explained that many white Confederacy-supporting southerners, including many white Charlestonians, had no interest in spending a day decorating the graves of their former enemies. Conversely, African American southerners perpetuated the holiday in the years immediately following the Civil War, Domby shared.

“Without African Americans, the ceremonies would have had far fewer in attendance in many areas, making the holiday less significant,” said Domby Civil War Monument in Washington DC Interestingly, Confederate sympathizers began observing “Memorial Day,” in honor of their fallen soldiers. Following World War II, the holiday was more commonly called Memorial Day, but federal law didn’t formally recognize the day by that name until the late 1960s.

“There is still a clear cultural link between the 1865 ceremony and later ceremonies,” Domby noted. “That cultural link is what interests many historians including David Blight and myself. So, while the ceremony in Charleston may not have been the direct inspiration for Logan, the 1865 ceremony clearly shared many of the meanings that would come to characterize future ceremonies.”