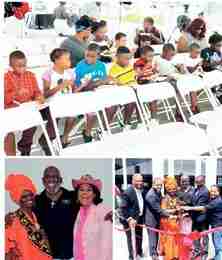 MIAMI – Most non-profit organizations rely on grants and other donations to function. The types of programming and the manner in which those programs are operated must often comply with requirements of the funding source – whether the requirements align with the needs of the organizations’ clients or not.

T. Willard Fair, president and chief executive officer of the Urban League of Greater Miami, Inc., said the agency set out to generate its own revenue to ultimately make it accountable to itself and the people it serves. Fair said the agency established a for profit real estate development division that not only creates affordable housing throughout Liberty City, but also generates significant revenue so it can operate independently without answering to funders.

On Friday, June 29, on the site of one of the ULGM’s affordable housing properties, Fair, his staff, elected officials and the community were on hand for the ribbon cutting ceremony officially opening the We Rise Educational Village, a partnership with over 30 community organizations with the goal of changing the narrative about educational achievement in Liberty City.

Feeling empowered to ruffle the feathers of those who don’t agree with his approach, Fair said, has been essential.

“I’ve been doing this now for 55 years,” he said of his tenure as ULGM president and CEO. “I used to, when I was leaving home going to a board meeting, say ‘When I come back, I might not have a job because I’m not going to un-ball my fists in order to appease somebody about what they should be doing on behalf of black people in Dade County,”’ Fair said.

“Every time I would raise my voice, someone would remind me ‘you know you get your money from the United Way,’” Fair explained. “Or someone would say to me ‘I’m not going to buy but two tickets.’”

Regardless of the warnings, Fair said, “I knew that I was not going to stop talking.”

He added he did not want to “have to kowtow to some folks who disagreed with me.”

The energetic leader said while speaking up is important, he also knew “I could not do it at the risk of destroying the agency. So I set out on a plight to figure out how I could earn my money the old-fash ioned way.”

That old fashioned way included identifying and contacting the owners of the area’s dilapidated property and becoming the “affordable housing developer in Liberty City.”

“I found out they were owned by folk who did not live in Liberty City. I wrote all of them a letter. And they gave me some property,” Fair shared.

The result, he explained, is “We started on the path of becoming self-sufficient. We have not had a fundraiser in 25 years. We don’t beg no more. We don’t care if you support us or not, we’re going to do what we have to do. You can do that when you’re independent. Oh, it feels so good.”

According to a written statement, The ULGM, in partnership with its affiliate entity, New Urban Development, is the largest owner of entitled land in the Liberty City community.

The agency’s intention for the We Rise Educational Village is to teach residents the power of self-sufficiency and self-determination through a ten-year plan that includes an increase of academic and educational achievement with parent engagement, parent involvement and parent mobilization as the foundation.

The initiative will span a quadrant and focus the bordered by I-95 to the east, 27th Avenue to the west, 73rd Street to the north and 46th Street to the south. This is part of the organization’s multi-faceted transformation strategy that incorporates educational, economic, spiritual and political engagement.

The 150-units at The Village, 860 N.W. 69th Street, are a part of the Educational Village. The $40M state of the art gated community features top line amenities including a security gate, private clubhouse, swimming pool, state of the art exercise complex, Wi-Fi and energy efficient washers and dryers.Village residents Exzondria Bell and Selena Smith have nothing but praise for the development.

Bell, who has lived in her two-bedroom, two bath apartment for a year, said, “I love it here. Peaceful community. Everything is great. This is the best place I’ve ever lived.”