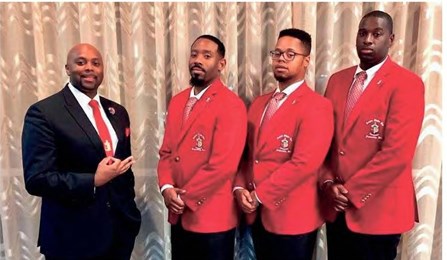 For the second consecutive year the chapter has been named the Medium sized Chapter of the Year for the fraternity’s Southern Province, which includes all Kappa chapters in the states of Florida and Alabama, the Bahamas, Panama, and the U.S. Virgin Islands.

The Miami Alumni Kappas also have shown that for those men who had the desire to join the fraternity in college days, the option is still available even though those college days have passed.

Miami Polemarch Kyle Harris and other of Miami Chapter leaders recently traveled to Jacksonville with three local professionals who wanted to become Kappas. After undergoing the fraternity’s Membership Training Academy, out came three new Kappa men, who now add to the group’s growth, experience and expertise.

Topping off the honors for the month of March, Miami Kappa Tony Barnes, founder, owner and CEO of Tony Barnes Productions, has been named one of the 50 Most Powerful & Influential Black Leaders of 2019 by Legacy Miami.