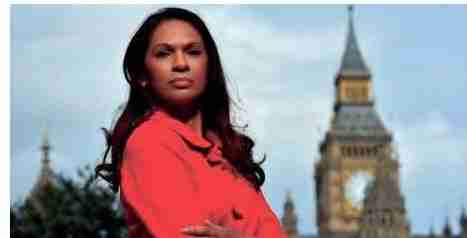 Gina Miller understood she was taking a highly controversial step when she decided to sue the British government over how to proceed with the United Kingdom’s departure from the European Union. Little did she realize just how vicious the backlash would be.

Evidently believing that Miller wanted the court to set aside the result of the referendum, some critics, including parts of the media, launched a personal attack on her. “My photo was altered to make me look darker,” she told South Florida Times Tuesday.

“I’ve had people say there are only three positions a woman of color can have – that it, a prostitute, a cleaner or having babies,” Miller, successful investment manager and philanthropist of Indo-Guyanese background, told the Guardian newspaper.

BrExIT, FroM 1A But the successful investment manager had no intention when she sued the gov- Government on June 27 of seeking to reverse the outcome of what has become known as Brexit – British exit from the EU. She explained Tuesday that she was indignant that the government was planning to take unilateral steps on how the withdrawal should take place and bypass Parliament.

Hers was among eight lawsuits and the courts decided to make her the lead plaintiff. The case went to the Supreme Court, which ruled 8-34 in her favor on Jan. 24. Most observers believe the break with the rest of Europe will still take place over the next two years but Miller, who supported remaining in the EU, still feels she has done the country a great service.

As a result of her lawsuit, the government has had to take its plans to Parliament for debate and Miller feels vindicated that she has prevented a throwback to the 17th century and defended British democracy and the rule of law. But it has come with a price.

Besides the personal attacks, she was harassed on social media, threatened with rape and with beheading. She has grown so fearful of being harmed that she has hired bodyguards and keeps her three children at home on weekends for their safety.

At least eight people have been questioned by police over threats to her safety and at least two men have been arrested. She told the Guardian she was called “a primate, a piece of meat, that I should be hunted down and killed” and that she made her money “on my back.”

But the mother of three, including an adult daughter who is developmentally disabled, has had a lifetime of preparation for just such a challenge.

Miller is the daughter of the late Doodnauth Singh, a politically active former Guyana attorney general. She was 10 when her parents sent her and a brother to study at a private school in London, where her classmates were less than welcoming.

Then funds from home dried up as the Guyana government imposed strict restrictions on foreign currency outflows. Miller, then 13, and her brother, 15, had to move into an apartment which their parents had bought.

She recalled in a first-person article in Vogue magazine that on weekends and twice a week she worked as a chamber- maid in hotels or cleaned up the restaurant, while her brother ran two paper routes and washed dishes.

“We were aware that it would be illegal to live unsupervised until my brother turned 16, so I did everything to look older,” she wrote in Vogue. “I would leave for school in the morning wearing grown-up clothes and high heels, and then change into my school uniform in a petrol station on the way, then do the same in the evenings.”

She went on to obtain a marketing degree and a master’s in human resource management at the University of London. She co-founded, with her husband Alan Miller, the SCM Direct investment firm and runs the Miller Philanthropy and the True and Fair Foundation to push for greater transparency in investments – her enduring cause.

“It’s all due to the influence of my parents, my father in particular,” she told South Florida Times. “When he came home, he talked to me about being a lawyer, about helping people. He was an incredible role model in my formative years. My mother stressed the importance of working hard and always told me you can’t take things for granted.”