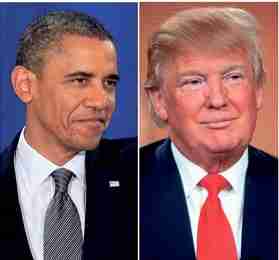 It is one of the greatest ironies of all time that the man who launched his political career by trying to delegitimize the first black president has been given the chance by white folks, mostly, to do just that. Donald Trump did not succeed in his campaign to prove Barack Obama was not a natural-born American citizen but when he takes office in January he will be able to undo almost all of what the incumbent has achieved.

He is expected to be aided and abetted by a Senate and a House that remain under the control of his party, along with the inevitable collusion of the Supreme Court. When these three branches of government are done with him, it will be like Obama never really was president. Regardless of the consequences for some 20 million Americans, the Affordable Care Act — Obama’s signature accomplishment — will almost certainly be repealed finally, after more than 50 attempts by the House. And despite what Trump and other Republicans have been saying, it will not be replaced by anything even remotely resembling affordable health insurance for those who are currently benefitting from the so- called Obamacare.

Regardless of their campaign claims, the Republicans are too vested in big business not to substitute a plan, if they do even that, which will bring a new wind- fall to insurance and drug companies.

Trump and his cohorts will also waste little time cracking down on undocumented immigrants, even though an overwhelming majority of Americans support a path to citizenship for them. But it is difficult to see how the incoming president will implement his campaign call for a “deportation force” to do the dirty work.

Similarly, the idea of building a $10 billion “big, beautiful” wall along the border with Mexico – and then make the Mexican government pay for it — is another proposal that is unlikely to go far.

But Trump is bound by his campaign rhetoric to do something about undocumented immigrants and he is almost certain to settle on revoking the Executive Orders which Obama has issued, such as halting the deportation of some of them and providing protection for their children who grew up in America.

His call for a ban against the world’s 1.5 billion Muslims and his refusal to accept Syrian refugees as part of a global plan is just as quixotic.

Trump will also move quickly at Obama’s initiatives on curbing greenhouse gas. He and his Republican colleagues do not believe that humankind is mostly to blame for the global warming that is threatening the future of the planet.

The election outcome also puts in danger Obama’s incremental efforts to reform the criminal justice system, especially its entrenched biases towards blacks and Latinos, and the consequences for communities of color.

In fact, Trump has promised to bring “law and order” to such communities, a term that is always fraught with dread.

But the most significant outcome of the election will be what happens with the Supreme Court. The Republican-dominated Senate took the rare step of refusing to even consider Obama’s nominee to fill the vacancy created by the death of Antonin Scalia. Now Trump will nominate a conservative replacement, most likely a hardline ideologue like Scalia, and the court’s rightwing tilt will be restored.

Even more, Trump will most likely have the opportunity to replace one or perhaps two justices with the expected retirement of the aging members of the court. That will shift the decisions even further right, negating the moderating effect of the middle man in the 5-4 composition which has held sway for a generation.

That is said to have been the spark that lit the fire for those who did not want Hillary Clinton – or any Democrat – to succeed Obama. To them, it was OK for conservatives to dominate the court and to even further entrench themselves because many of the substantive changes which America will undergo under a Trump presidency will emanate from Supreme Court decisions and will be directed against Obama’s legacy.

It will not be surprising. For example, to see same-sex marriage, the right of a woman to control her body and voting rights of blacks among those quickly put in play.

Of course, all of this can be marked down as simply politics as usual under our democratic system, with the winner of the presidential election getting the opportunity to shape the republic. But, unlike the past, America is in the throes of a divisiveness that is detrimental to the health of the nation.

Americans will increasingly become a diverse population and it is inevitable that non- whites will become less and less an overall majority. At such crossroads, statesmanship demands that a leader acknowledge this reality and work towards building a society that is pluralistic.

Unless he has a miraculous change of heart caused by his impressive electoral victory, Trump is hardly likely to become that statesman. His senior campaign staff and his rhetoric have been infused with blatant racism.

Great Again” and the nationalistic fervor of the shouts of “U.S.A.! U.S.A.!”

With Trump’s victory, white America has staved off what many of them see as the existential threat to the foundations of the nation. But it will be unrealistic for them to try to avoid the inevitable changes that lie ahead.

It is a pity, though, that many of the battles that should have been settled more than half a century ago will inevitably have to be fought all over again.

Next post ASK A DESIGNER: new twists for the Thanksgiving table