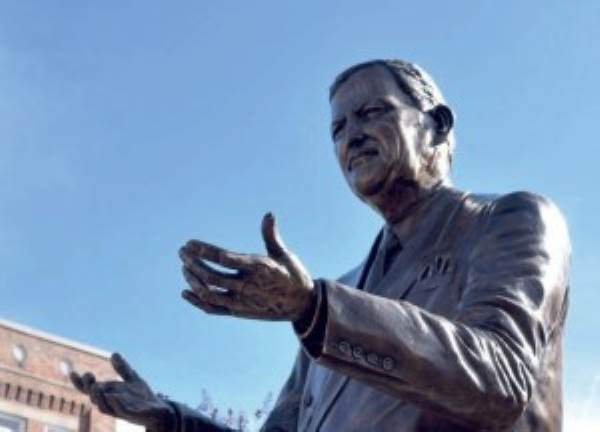 The Hattiesburg American reports the bronze sculpture, created by artists Vixon Sullivan and Ben Watts, was commissioned in 2018 by the Forrest County Board of Supervisors to honor Dahmer who was killed for trying to get black people registered to vote.

Dahmer was a farmer and NAACP leader who was killed when Ku Klux Klan members ﬁrebombed his home after klansmen learned residents could pay their poll taxes at the Dahmer family grocery store next to their home. His widow, Ellie Dahmer, who was at the courthouse in Hattiesburg on Tuesday surrounded by family, said she was impressed by the statue’s likeness to her late husband and appreciated its placement at the courthouse.

“I never thought I would see this day, not in my lifetime,” she said.

The sculpture now sits atop a wall that bears Vernon Dahmer’s motto: “If you don’t vote, you don’t count.”

“It’s exciting to see it ﬁnally coming to fruition,” Forrest County Board of Supervisors President David Hogan said. “I think it’s incumbent on us to preserve our history.”

The sculpture tentatively will be dedicated Jan. 6 – just days before the 54th anniversary of Vernon Dahmer’s death.

It was on Jan. 10, 1966, when the Dahmer home in the Kelly Settlement was ﬁrebombed by the White Knights of the Ku Klux Klan. The family had received numerous death threats before that day and took turns sleeping in shifts so they could be on constant alert.

Klansmen also ﬁred gunshots into the home. Dahmer returned ﬁre during the attack, trying to give his family enough time to get out.

He suffered burns from the ﬁre and died later that day at a local hospital. “He made a big difference – as a Christian man who gave his life to help others,” Ellie Dahmer said.

KKK Imperial Wizard Sam Bowers, who ordered the killing, was convicted and sentenced to life in prison in 1998 – seven years after the family convinced local authorities to reopen the case. Bowers died in prison in 2006.

Ellie Dahmer said even though many young people will never experience what others did during the civil rights era, she hopes they will get to know and appreciate the struggles of generations past.

“I hope they will learn (about Vernon Dahmer and civil rights),” she said. “I think they will, once they start reading (about it). A lot of it’s online now.”

Next post 100 gathered for ‘Art of Becoming a Woman’