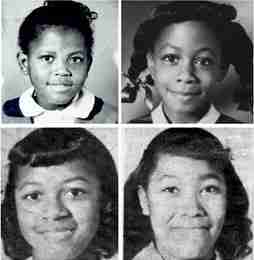 PHOTOS COURTESY OF FIND A GRAVE AND BIO.COM

BIRMINGHAM, Ala. (AP) – The four girls killed when a bomb placed by Ku Klux Klan members ripped through a Birmingham church in 1963 were remembered in a Saturday memorial service on the 55th anniversary of the deadly attack.

Addie Mae Collins, Denise McNair, Cynthia Wesley, and Carole Robertson were killed in the Sept. 15, 1963 bombing of Birmingham’s Sixteenth Street Baptist Church. The four girls, between the ages of 11 and 14, were getting ready for Sunday services when dynamite that had been placed under the church stairs detonated. The service also honored two young boys killed in separate incidents, Johnny Robinson Jr. and Virgil Ware, shortly after the bombing.

Local news outlets report that memorial service speakers spoke of remembrance and reconciliation and to guard against the hateful beliefs and rhetoric that led to the bombing.

The viciousness of the bombing shocked a nation and brought national attention to Birmingham, the same city where police dogs and fire hoses had been used to turn back civil rights marchers.

U.S. Sen. Doug Jones, who prosecuted two of the four men responsible for the 1963 bombing, gave the keynote address during the Saturday service.

“They remind us of what Dr. King said that we must substitute courage for caution and that we must be concerned with not merely about who murdered them but the system, the way of life, the philosophy which produce their murders,” Jones said He urged attendees to speak out against hateful rhetoric when it occurs, saying that it was the hateful rhetoric of segregationist politicians in the 1960s that emboldened attacks on African Americans.

There was a fifth little girl in the room that day. Sarah Collins Rudolph survived but lost her sister, Addie Mae Collins, in the bombing. Rudolph lost an eye in the blast.