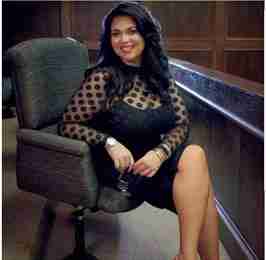 ODESSA, Texas (AP) – District Judge Sara Kate Billingsley remains exuberant in a field most judges find debilitating and how she manages it is a complex story about her mother’s example, a support system of friends, a near-death experience and other things.

The Odessa American reports born in Hobbs, New Mexico, and living there until her parents divorced when she was 11, the 446th Judicial District family law jurist graduated from Midland Trinity before studying musical theater at TCU.

Seeing that show business was hypercompetitive, she transferred to the University of Texas of the Permian Basin to major in marketing and enrolled at the University of Oklahoma College of Law in Norman, where she contracted pneumonia and acute respiratory distress syndrome in the spring of her first year. “I was taking 57 breaths a minute because my lungs wouldn’t expand,” said Billingsley, 40.

“I was in a medically induced coma for a month and the doctor told my mom to say her goodbyes because I wouldn’t survive. After 10 days, he said I had a 51 percent chance.”

Billingsley went to Oklahoma City for six months of rehab to relearn how to walk, talk, feed herself and brush her hair, but worked her way out in seven days and a month later was back in class.

“It’s surreal to wake up and a month of your life is gone,” she said. “My mom wrote a journal for me of what happened in the world each day.”

Billingsley found inspiration in Jeremiah 29:11, which says, “For I know the plans I have for you, declares the Lord, plans to prosper you and not to harm you, plans to give you hope and a future.”

“I’m here to do great things for people and make a difference in a positive way,” she said.

Somewhat surprisingly appointed three years ago by Gov. Greg Abbott after the Texas Legislature created the new court, Billingsley got all the family law cases from the other four courts and expects to have adjudicated 9,000 through the end of this year with 1,500 new ones having been filed from January through August, she said.

Noting the judge’s own divorce nearly three years ago after three years of marriage, Billingsley said the experience enhanced her empathy. “Most days are tough in here,” she said of her court.

“It’s sometimes a rude awakening when I hear how unkind people can be to each other and their children. I heard an awful case today that’s been passed down through many judges for years. It’s highly volatile with multiple children, but we set it for a final hearing.

“That’s why I love doing family law. I get to make a huge difference. Conferring with the children, you find out what makes them tick, what they want in life and where they want to be. Little kids tell you all kinds of things, sometimes things you don’t want to hear. I’m not certain you can win in family court, but you should also not have to lose.” Explaining that she strives for consistency, Billingsley said, “I probably didn’t get the ruling right if one side leaves really happy and the other side is really mad.

“If both sides leave a little miffed, I probably got it right. My message is one of hope: take care of the kiddos, take care of yourselves and we’ll figure the rest out later. My biggest advice is just to be kind. I do the very best I can each day and then leave it at the door.” She does that in part with her cooking, taking Facebook orders for “Creations by Sara Kate” and catering weddings, parties and other events. And she leans on friends including Dr. Sanjay Patel, Odessa policeman Ian Kapets, court administrator Michelle Conn, attorney Julie Prentice and former client Sam Ares.

Other outlets are playing golf, watching the Oklahoma Sooners play football, traveling to Italy and Egypt, scuba diving off the Turks-Caicos Islands in the Bahamas and driving her Lincoln Navigator and BMW i8 sports car Billingsley will sing in the Permian Playhouse’s Nov. 8 production of “Divas and Desserts Gone Country.”
Doing CrossFit training and using the Keto Diet of high fats, moderate proteins and low carbohydrates, she has lost 100 pounds since 2014. “I need to lose another 25,” she said.

Billingsley said her staff fortunately doesn’t mind the long days that can run past 9 p.m. “Last year the county bought out my bailiff Ruben Deanda’s nine weeks of comp time,” she said.

.Prentice said the judge blends compassion with professionalism. “Sara is the best person I know,” Prentice said. “She is so caring and professional that she makes the biggest difference in people’s lives. It’s amazing to watch her work. She’s just as kind and caring as she was when she took the bench.”

Her catering specialties are charcuterie boards, handmade meatballs, tenderloins, cheeses, fruits, meats and crackers. “It’s something I can do that makes people smile and not be mad at me,” she said.

“When I have a bad day, I roll out the pasta and cook something.”