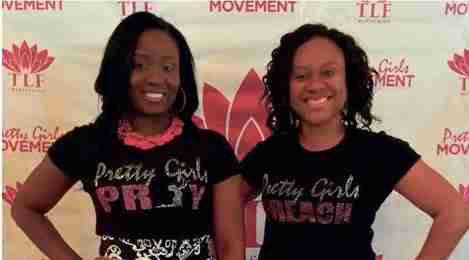 Tamika Fussell is hard to ignore. Not only is she a pretty woman, but she’s a pretty woman that preaches! The minister and evangelist is on a mission to reiterate the accuracy of the old adage, “You should never judge a book by its cover.”

A native Miamian, there’s more to Fussell than meets the eye. Currently, she is on staff at New Jerusalem Primitive Baptist Church, under the leadership of Elder Kenneth A. Duke, where she serves as the lead activities director, ministerial staff secretary and assists with outreach ministries. She holds a post master’s in counseling and serves as a guidance counselor at McFatter Technical High School, where she provides life-coping skills and preparation to high school students.

In June of 2016, she started her ‘Pretty Girls T-shirt line’ with her signature “Pretty Girls Preach” tee, a slogan she’d first used as a hashtag. Due to demand, the line grew to include other slogans that promoted the message that girls are beyond their beauty.

“Pretty Girls has nothing to do with vanity, but has everything to do with virtue,” Fussell told the South Florida Times. “It sends out a message that there is more to me than my looks. I am intelligent, equipped and gifted.”

Fussell started the line after having some personal experiences that prompted her to edify other women.

“I am a minister and it’s been quite challenging being a woman in ministry because it’s more of a male dominant arena,” Fussell said. “Because of the way I look, the way I dress, I’ve been looked upon as eye candy and not taken seriously by a lot of men. I just want people to know I am a pretty girl, but I can preach too. God called me for this and this is something I’ve been ordained to do by God.”

So the Pretty Girls t-shirt line grew into a movement called “Pretty Girls with a Purpose” and TLF Ministries was born earlier this year. While Pretty Girls is dedicated to promoting self-esteem, self-love and self- worth; TLF Ministries is open to all people. Its mission is to encourage, empower and enlighten people to reach their God-given potential.

“All of us have a gift, but not all of us know what our gift is so it’s helping people like someone helped me – to get to that point – to reach their destiny,” Fussell said. “I’m encouraging people to be a better you.”

To date, Fussell has hosted two events – “Pretty Girls Rock Your Pearls” and “A View of the Hill in Heels.” ‘Rock Your Pearls’ focused on issues women in ministry face in- cluding: the witness of a woman, the highs and lows of accepting the call, being dutiful in a male dominated work environment and serving in a sexual charged society. ‘Hill in Heels’ focused on Psalm 121, which reiterates the theme that the Lord is a keeper. Shoe donations were also collected to go to several South Florida charities.

She said she’s been overwhelmed by the response she has received since officially starting her ministry.

“It was overwhelming. The Lord just showed up. It was like, okay God. You are simply amazing. If we just believe and just step out and just rest on Him and allow Him to lead us, He’ll do mind-blowing things,” Fussell said.

Davica Williams is also a fellow minister who is an active participant of the Pretty Girls Movement. A former full figured model and career woman, Williams said she prayed for a network of Godly young women who would show up and empower each other. She also admitted that she wasn’t initially comfortable with the art of preaching in the black church, but Fussell gave her a platform for her voice to be heard.

Williams said Fussell reached out and asked her to be a panelist for her Pearls event and she’s been supporting ever since.

“I believe in showing up for other women in ministry. For me stepping out of my own fear box of launching my ministry – being in that place, my voice was honored and it was a coming together of sisters that was powerful,” Williams said. “My life has been touched by her (Fussell) authenticity, her zeal for God and her willingness to be transparent – and we are like spirits in that regard.”

Fussell admits that with anything you do there will be stumbling blocks and hurdles. But she wants to use the pain and hurt she’s endured in her personal life and in ministry to let people know they can persevere.

“No matter what happens in life, whether it’s self-inflicted or life-inflicted, they can make it. When we simply just trust God for everything, once they go forth, they are unstoppable,” Fussell said. “My overall goal is to touch lives by planting seeds of God’s goodness. I want everyone that I encounter to know that there is greater. That they do not have to dwell in their present situation. That their past does not write their future.”

To keep up with Fussell, TLF Ministries can be followed on Facebook. To purchase a Pretty Girls t-shirt, visit squareup.com/store/tlf-ministries/

Previous post HOW FAMILIES CAN BRING CHEER to the holidays