Mann & Wife returned to the small screen this week 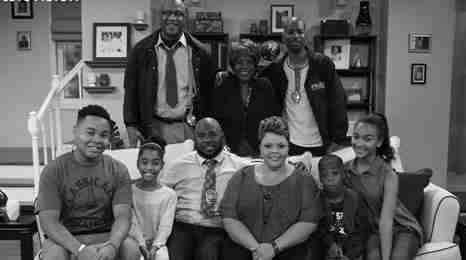 “Mann & Wife” returned to the small screen this week.

ATLANTA – Real life husband and wife duo David and Tamela Mann returned to the small screen bringing a new assortment of hysterical family situations and laughs in the third season of their hit Bounce comedy series “Mann & Wife” on March 28.

Bounce doubled the fun by kicking off the new season with two new original, back-to-back episodes Tuesday. All-new episodes will continue to premiere Tuesday nights at 9 p.m. through the spring on Bounce.

The Manns are not only the stars of the show, they also serve as its executive producers. The half-hour situation comedy follows their characters – newlyweds and second- chance sweethearts Daniel and Toni Mann – as they laugh and love their way through the ups and downs of life as a blended family. On the show, they each have two children from previous marriages.

Daniel has two boys and Toni has two girls. Daniel is a police officer and Toni is a teacher. The two have moved their families into David’s house in Atlanta, along with his mother, Lorainne (played by Jo Marie Payton) and they work to navigate and adjust to their new lives together.

In addition to The Manns, Tony Rock is back as Michael Hobbs, Daniel’s partner on the police force, with Steven Walsh as Daniel, Jr., Amir O’Neil as Darren, Lauren Kennedy Hardy as Terri and Jadah Marie as Tosha – who play the Mann children. Terri J. Vaughn also joined the cast this season as Daniel’s new Lieutenant. She also directed an episode that airs during the season, which includes hilarious takes on visiting family, mistaken identity, school pressure, phony health scares, an embarrassing email leak and even a 1970’s cop show spoof.