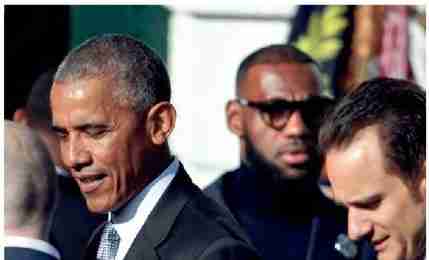 WASHINGTON – LeBron James made his third championship-celebrating trip to the White House on Thursday, welcomed as he was for the first two such trips by President Barack Obama.

If James returns in the next four years, it may seem very awkward.

James is no fan of President-elect Donald Trump, and — after a most divisive presidential campaign ended this week — athletes and coaches are dealing with the same emotions as those in everyday walks of life. And many in the sports world haven’t been shy about expressing their disappointment over Trump’s election.

“I can’t say I’ve ever been ashamed of our country,” Detroit Pistons coach Stan Van Gundy said. “Until today.”

James openly backed Hillary Clinton for president, and it just so happened that he and the Cleveland Cavaliers were at the White House — part of the standard reward for winning a championship — on the same day Trump was. Obama met with Trump in the Oval Office to talk presidential transition as the Cavaliers were getting a tour, then Obama greeted the NBA champions on the South Lawn about two hours later.

There was no mention of Trump during the Cavaliers’ ceremony.

There have been many, many mentions of president- elect in many other realms of the sports world.

“All of a sudden, you’re faced with the reality that the man who’s going to lead you has routinely used racist, misogynist, insulting words,” Golden State Warriors coach

It’s rare that one topic can be the primary discussion point in locker rooms across different sports at the same time.

This is one of those times.

New England Patriots coach Bill Belichick and quarterback Tom Brady were peppered with questions Wednesday about their preferences, after Trump indicated he had their support. But in college football, Alabama coach Nick Saban said — somewhat unbelievably — he wasn’t even aware of Election Day.

“It was so important to me that I didn’t even know it was happening,” Saban said. “We’re focused on other things here.”

Chicago Cubs pitcher Jake Arrieta tweeted that it’s time “for Hollywood to pony up and head for the border,” what appeared to be a reference to some actors and entertainers saying they would move to Canada if Trump won. Trump also had support from others in sports; Buffalo Bills offensive lineman Richie Incognito used Trump’s signature “Make America Great Again” phrase as a hashtag.

“Right now, we have a president in office who is terrific,” Rivers said. “And we have one coming in that has done nothing yet, and you’ve got to give him a shot. He’s going to be president. That’s a guarantee.”

Trump and sports are often intertwined, including earlier this year when the PGA Tour announced that his Doral course near Miami would not host an event for the first time in more than 50 years. Part of the issue at Doral, though not the entire problem, was that Trump made plenty of caustic comments during his campaign and that made finding sponsorship for a PGA Tour event on one of his courses difficult.

The Doral tournament, somewhat ironically, is headed to Mexico — the country that Trump wants divided from the U.S. by a wall to combat illegal immigration. On Thursday, Mexican Formula One driver Sergio Perez ended his relationship with one of his sponsors after that company, Hawkers, made a joke that Perez thought was in poor taste about the planned wall.

“I would never let anyone make fun of my country,” Perez said.

But the frustrations are certainly not limited to minorities in sports right now. Kerr and Van Gundy, two of the league’s most outspoken coaches about many issues, are white.

Van Gundy said he couldn’t figure out what was bothering his team Wednesday, before Pistons forward Aron Baynes — an Australian — spoke up and suggested that the team vent about the election.

And after that talk, Van Gundy let his anger out. He said he lives in Oakland County, Michigan, an area that voted primarily for Clinton.

“At least I can look around,” Van Gundy said, “and say we weren’t the ones putting that guy in office.”