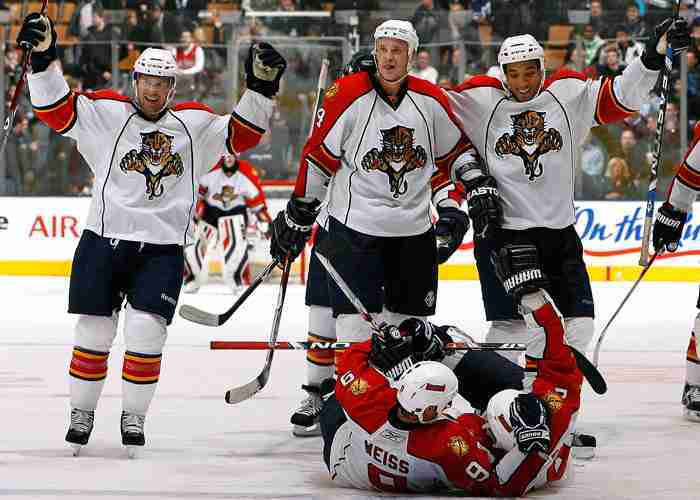 SUNRISE, Fla. (AP) _ Dale Tallon’s hands were not on the Stanley Cup during the Chicago Blackhawks’ victory celebration earlier this week.

His fingerprints, one could argue that they were.

Much of the groundwork for Chicago’s run as the NHL’s dominant team _ three Cups in six years, in challenging salary-cap times no less _ was laid by Tallon when he was the Blackhawks’ general manager. He’s tried to mimic the same philosophy as Florida’s GM, building through the draft, adding free agents when the time is right and swinging smart deals when opportunities knock.

And with the Panthers set to host next week’s draft, Tallon is convinced that the long-struggling franchise is poised for a breakthrough _ soon.

“I don’t know any other way,” Tallon said. “That’s the way I built a team there and that’s the way we’re building a team here. And I think it works. So I feel confident that we’re headed in the right direction because there’s a lot of similiarities with what’s happened as far as the drafting and trades.”

Florida has the No. 11 pick in the draft, which starts in its home arena on June 25. Tallon indicated that the Panthers will try to move up, and there’s signs that some teams at the top of the draft _ outside of Edmonton and Buffalo, which will almost certainly take Connor McDavid and Jack Eichel No. 1 and No. 2 respectively _ may be willing to hear offers.

The Blackhawks angered some players when they essentially forced Tallon out of the GM role in Chicago in 2009, though the team did engrave his name on the Stanley Cup and present him with a ring after winning the title in 2010. Tallon doesn’t seem to have too many lingering hard feelings; when Chicago hoisted the sport’s chalice this week, he enjoyed watching.

After all, about half the players that Chicago used in this year’s playoffs were brought in while Tallon was with the Blackhawks _ mostly through the draft, a couple more as free agents and in trades.

“I’m happy for them,” Tallon said. “It’s great for hockey and makes me feel confident in the direction we’re headed. When I started there, I didn’t know what I was doing.”

He’s got a much more clear idea of what to do now.

The Panthers still aren’t great _ they missed the playoffs yet again this season and somehow haven’t won a postseason series since 1996 _ but it’s clear that they’re a team on the rise. There’s two future Hall of Famers in the locker room in winger Jaromir Jagr and goalie Roberto Luongo, a talented young core led by forwards Jonathan Huberdeau and Nick Bjugstad, and a Calder Trophy candidate in defenseman Aaron Ekblad.

Most of the pieces needed to contend, Tallon thinks, are now in place. That means Florida can take a different approach entering the draft next week, finally being able to look at specific needs instead of just best-player-available.

“Right now, we’re strong up the middle and the back end,” Tallon said. “So we’re going to focus on our needs and obviously speed and scoring are two things. If you saw the finals, there was a lot of speed. There wasn’t a lot of scoring, but there was a lot of chances. So that’s the important part for us, look at our depth chart and add pieces where we know we’re weak.”

It’s getting harder to find those weak spots on the Panthers’ roster.

Next post Nationals OF Harper strains hamstring, exits in loss to Rays