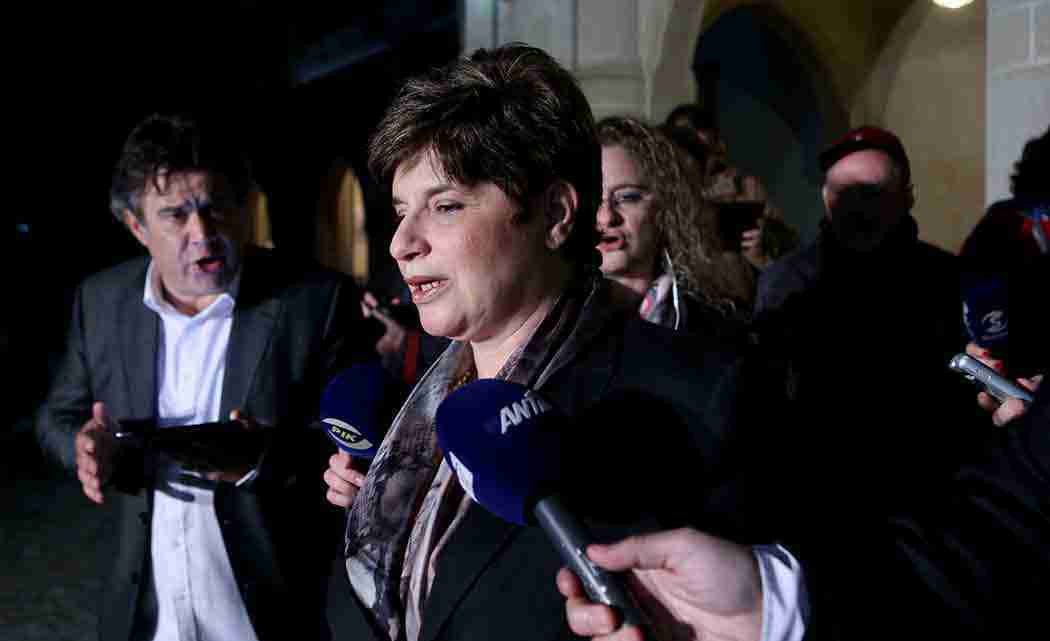 NICOSIA, Cyprus — Cyprus’ president said Sunday that he will seek to have the bailed-out country’s embattled Central Bank chief removed from her post over a perceived conflict of interest.

President Nicos Anastasiades met late Sunday with Central Bank Governor Chrystalla Georghadji to contain the damage from a debacle that has shaken public trust in the institution. It also threatens to erode Anastasiades’ personal credibility as he tries to nurse the country back to financial health.

Georghadji is in breach of her contract because her husband’s law firm represents the former head of a defunct lender, who’s embroiled in a legal battle with the Central Bank, government spokesman Nicos Christodoulides said.

Christodoulides said the president “has no other choice” but to ask the attorney general to initiate legal proceedings aimed at Georghadji’s dismissal.

“The president of the republic regrettably notes that trust in the Central Bank, as well as in himself, has been gravely degraded,” Christodoulides said.

Anastasiades appointed Georghadji a year ago following the resignation of her predecessor, Panicos Demetriades, after the Cypriot president accused him of botching the country’s bailout negotiations with international creditors a year earlier.

Cyprus received a 10 billion euro financial rescue package in March 2013 that pulled it back from the brink of financial meltdown. But a core demand from international creditors was to seize uninsured deposits in the eurozone country’s top two banks to prop up the largest lender, while shutting down the smaller one.

The government spokesman said responsibility rests on Georghadji’s shoulders because the president wouldn’t have appointed her had she informed him of her husband’s connection to former Laiki Bank chief Andreas Vgenopoulos.

Georghadji emerged from the meeting with Anastasiades saying that she would carry on with her duties and that the “matter is closed as far as I’m concerned.”

“There’s a constitution and laws that must be respected and which protect the independence of this office,” Georghadji said.

State Broadcaster CyBC reported that the Central Bank governor’s husband, Andreas Georghadjis, said his law office would stop representing Vgenopoulos and accused individuals he didn’t name of using “hypocritical tactics” to undermine the Central Bank and his wife. Georghadjis said the Cypriot president knew that Vgenopoulos was his client two years before appointing his wife.

The matter dates back to October when Anastasiades publicly criticized Georghadji for not disclosing that her daughter worked for her estranged husband’s law office, prompting a revision of her contract and assurances that the matter would be resolved.

But things boiled over again during a tumultuous parliamentary ethics committee meeting last week when a Central Bank executive board member alleged that Georghadji had obtained a list with the names of lawmakers with overdue loans at the Bank of Cyprus.

The board member, Stelios Kiliaris, suggested that Georghadji could use the information as leverage against detractors and get them to back off from conflict of interest accusations.

Kiliaris, who has since resigned, went as far as to say that Georghadji had a vested interest having her estranged husband’s law firm win the case against Vgenopoulos because she and her family would stand to gain millions.

Georghadji denied the allegations, insisting that she only sought the list as part of her supervisory duties and that she had no intention of holding the information over anyone.