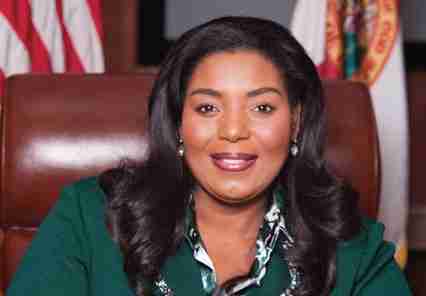 Fort Lauderdale, Fla. – Former Broward County Commissioner and congressional candidate Barbara Sharief is running for the state Senate challenging one of the top Democratic leaders in Tallahassee, Lauren Book in the Democratic Primary.

Book, 37, moved to District 35 to avoid a primary challenge with new Sen. Rosalind Osgood who won a special election in March to represent District 32 and must run again in August.

The districts were redrawn and Book’s Plantation home was placed in Osgood’s District. Osgood won the seat which was left empty last year when then-Sen. Perry Thurston, a Democrat, resigned to run for Congressional District 30.

Like Book, Sharief, who also ran for the congressional seat last year, was eyeing the Senate seat and ﬁled papers to run against her in a district Sharief represented when she served on the Broward County Commission.

"I’m so excited to announce my campaign for State Senate District 35," Sharief said.

Sharief, 50, said she served the community for 13 years, both on the Broward County Commission and Miramar City Commission, and is seeking an opportunity to serve in the Senate.

The South Florida native said she has political ambitions to serve in higher political ofﬁce to speak up for people without a voice.

Sharief said she learned about helping others from her father who was gunned down during a robbery by a teenager when she was 14 years-old.

She said he was a small business owner who was well known in the community for helping those in need.

To help her family cover expenses, Barbara went to work to support her large family of seven brothers and sisters.

She said it was a struggle but the experience and her father’s example instilled in her a strong work ethic and a drive to help others in any way she could.

Though Sharief became a certiﬁed healthcare professional and entrepreneur, political ofﬁce was her true calling.

"I love serving my community and I’m not done yet, not by a long shot," she said. "I see what the big money corporate interests and the radical right wing are doing in our state capital and it makes me sick."

But she’s facing Book, who has served in the Senate since 2016 and raised money amassed over $3 million for her campaign and candidates she endorsed.

Book has been the Senate’s minority leader since 2021 and is the daughter of powerful lobbyist Ron Book.

Book said in a statement that she was offended over Sharief’s decision to challenge her in the Democratic Primary following her failed congressional bid.

"I have spent the past several years ﬁghting for our shared Democratic values and I am now working tirelessly to not only increase Democrats’ numbers in the Senate but to stop the ultra right wing agenda of Gov. Ron DeSantis and his supporters," Book said. "Serving in the state Senate should never be a consolation prize, especially at such a time when our values and freedoms are under attack by the extreme right."

In response, Sharief said her bid is not affecting the Democratic values and she did not think about Book in her decision to run.

“I’m not hurting Democrats, I am a Democrat,” she said. “And if Lauren Book doesn’t want a challenge, then don’t run in this seat because she doesn’t live in this district.”

In Tallahassee, Book has advocated for victims of physical and emotional abuse being a victim herself while growing up.

In addition, in 2017, she ﬁled a bill that would remove Confederate Memorial Day from Florida’s list of 21 legal holidays, and a bill to remove the birthday of Robert E. Lee and Jefferson Davis as ofﬁcial state holidays.

"During a time when the country is completely divided, I think we look at celebrating our unique coming together instead of some of the things that kind of create hate and divisive environments," Book said at the time.

Book has been a formidable fundraiser for Democrats statewide, recently breaking a fundraising record thanks to her political action committee, collecting $3 million.

She also has support from most of her caucus members including state Sen. Bobby Powell from Palm Beach County and Sen. Shervin Jones who represented District 35 before redistricting and now is running for reelection in District 34.

They already decided to support her before Shareif entered the race.

“Lauren Book is a dedicated, battleproven public servant who I am proud to support in leading our Caucus and mounting the ﬁght against Republicans both in Tallahassee and in elections across the state this November," Powell said.

Said Jones: “I have worked side by side with Sen. Book and have seen ﬁrsthand her passion, her commitment, and her effectiveness in supporting our Democratic values."