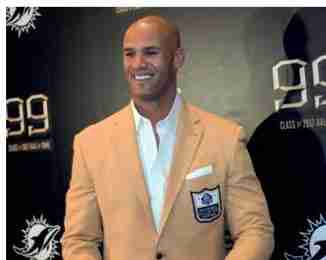 Jason Taylor is celebrated by the Miami Dolphins in Miami, Fla. on Nov. 2, 2017.

MIAMI – In August, former pro football player Jason Taylor was enshrined into the National Football League’s Pro Football Hall of Fame in Canton, Ohio, joining the ranks of the best in the NFL — a fraternity for only a few. Canton was a glorious celebration and moment for Taylor, who spent the bulk of his career proudly wearing a Dolphins’ uniform, making his mark both on and off the field in South Florida.

While the NFL celebration made a lasting impression on Taylor, on December 2, the Dolphins also rolled out the Red Carpet for him with their own Hall of Fame celebration for the beloved football star showing him some South Florida love for his great feat. Friends such as Dan Marino, O.J. McDuffie, Dwight Stephenson and Channing Crowder also walked the Red Carpet and attended the celebration in honor of Taylor, who was ecstatic, but humbled as his former team saluted his outstanding play for more than a decade.

He even got another surprise from the Pro Hall of Fame. David Baker, President and Chief Executive Officer of the Pro Football Hall of Fame, showed up at the South Florida celebration to surprise Taylor and present him his Hall of Fame ring of honor. Taylor beamed with pride the whole night, but was humbled and overwhelmed at the celebration and honors.

“This is humbling to me. They didn’t have to do this,”

he said as cameras flashed in his face on the Red Carpet at Hard Rock Stadium. “I played 13 years in the greatest city in the world. I’ve been very blessed. Thank you all.”

After an hour or so on the Red Carpet, the celebration moved to the field, where there was a brief, but formal program, with the unveiling of Taylor’s name and number in the rafters joining the other famous Dolphins who’ve entered the Hall of Fame. A capsule of Taylor’s career and journey to the Hall was captured on screens for all the private guests to enjoy. Taylor stood on stage in awe as his career was flashed before the audience.

“The emotions – it’s still raw. I still feel for some reason, don’t feel like I belong (in the Hall) – but I do. I used to sit here and look at these names and I would sit in awe of these guys. To be one of them is overwhelming. I’m truly honored,” he said as his name was unveiled high above the stands.

he quipped. There’s so many highs and lows in a career. Whatever you do, just win the game,” he said emphatically, demonstrating the fight within. “But this is all kind of undeserved. It’s humbling to me.”

His former teammates with the Dolphins said his honor is most deserving for many reasons. “He’s the best of the best,” said Dolphins Hall of Famer Dan Marino. “We have a special connection because we’re both from Pittsburgh. I’m honored to be here tonight to celebrate someone who is so worthy.”

Hall of Famer Dwight Stephenson said Taylor has excelled in the greatest possible way. “He’s tremendous and a terrific guy who’s very deserving of all of this. Just look at how he has excelled. He’s great as a person and as a player. He’s an example to so many.”

Former teammate Channing Crowder said Taylor is by far the greatest defensive player in Dolphins history. “It’s like we knew he was great, but now we see just how great he really was.”