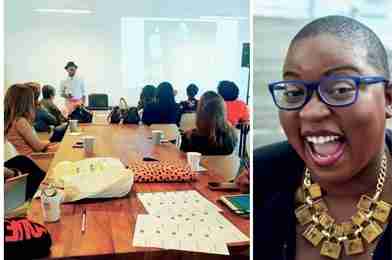 MIAMI – Co-working spaces have become a hugely popular way for entrepreneurs to work. The non-traditional concept is typically located in large buildings with expansive open space as well as offices that are available for small business owners, artists, freelancers and others looking for a professional work environment without a hefty price tag.

The model has exploded, with companies like We Work boasting over 210,000 members in the nation. Of the over 4000 co-working spaces in the country, 54 of those are black-owned, according to ThePLUGDaily.com. Florida has two and both are both located in Miami. There’s Ecotech, (670 NW 112th Street); Miami’s first green incubator and makerspace; and A Space Called Tribe, which co-owner, Felecia Hatcher said was intentionally located in Miami’s Overtown community (973 NW 3rd Avenue).

“Being in Overtown, it just made a lot of sense. It’s a neighborhood with a really rich history, and we wanted to honor the history, but also be a part of what the future holds and make sure that black people are a part of that future,” Hatcher shared during an interview in the Black Tech Week office. Being a part of and making sure other black businesses participate in the burgeoning opportunity and prosperity in Overtown – which is in the midst of massive redevelopment, is a priority, Hatcher explained.

A Space Called Tribe is beautiful. The two-story building located in the heart of Overtown sits across the street from the iconic Jackson’s Soul Food and a few blocks away from Lil Greenhouse Grill – frequent lunch spots for the members of Tribe. The ground floor includes the building’s largest office space, occupied by Circle of One Marketing; as well as class space and a vibrantly designed lobby.

Motivational quotes adorn the walls of the first floor as well as the second floor, which includes smaller offices occupied by gubernatorial candidate Andrew Gilliam’s staff, Elijah Wells Film Company, New Synergy, BMe and BeLoved Box. The Tribe’s open desk space and a modern kitchen are on the top floor, and picnic tables and lighting are available outdoors for members craving a fresh-air workspace.

Hatcher said opening it in February was intentional. In addition to celebrating Black History Month, the launch also aligned with Black Tech Week – the annual conference she and her husband, Derick Pearson founded that “partners with founders, corporations, and the community to create a valuable six-day national experience for investors, entrepreneurs, and techies of every kind.”

Hatcher said shared co-working space especially makes sense for the black community. She finds it mind-boggling that there are so few.
“You have to ask yourself why they don’t exist in the black community. We work. We need all the amenities that a shared space provides. We need cheaper rent,” she explained.

“When We Work first opened we had our office there. I was paying $250 a month for a building I could access 24 hours, free water, free coffee.”

She and her team were adamant about developing the concept for the black community.

“If they could have access to a building for a small amount of rent, you can just imagine how they can grow their business, move out of Starbucks and into a professional setting where you can meet people or host your workshops.”

BeLoved Box creator, Danie Spikes, has office space at Tribe. The relationship coach said her decision to become a Tribe member has been a great move for her company.

“I chose Tribe because the difference between being an entrepreneur and a successful entrepreneur is who you surround yourself with. I truly feel that the best and brightest come to Tribe,” said Spikes, who has had an office at Tribe for three months. “In that time, I have seen a significant shift in my business.” In addition to meeting and networking with “well-connected and well-versed entrepreneurs,” Spikes said the location was instrumental in her company signing a deal with the Dunn’s Josephine Hotel, scheduled to open in Overtown on Aug. 11.

Deals of that sort are exactly what Hatcher and her team had in mind.

“The space is a home that allows all of us to come together and convene on a regular basis, but also being able to work together, and what that close proximity means. Whether it’s bartering or partnerships, or just a high five when you’re having a bad day. All of that,” she said.

Another significant focus of Tribe is its influence on young blacks.

“Our Code Fever classroom is downstairs and (the youth) are able to see black and brown people working in a non-traditional environment…because the picture of when someone goes to work, it’s different now. I don’t own a suit. Derick (her husband) just bought a suit. There’s this whole way of working that’s completely different that allows our people to be authentically themselves in a way we’re usually not able to do in corporate America. It’s all of those things.”