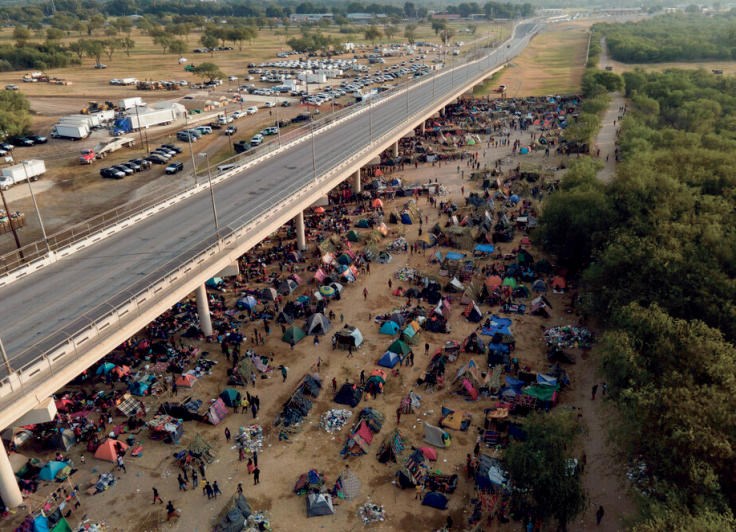 Faith-based groups – many of them longtime advocates for a more welcoming immigration policy – have been scrambling to keep up with fast-paced developments in the Haitian migrant crisis, trying to assist those in need while assailing the harsh Border Patrol tactics employed against them.

Before thousands of Haitian migrants dispersed last week from a camp in the border city of Del Rio, Texas, a coalition of churches and other groups was providing them with sandwiches, water and other essentials. Since dispersing, many of the migrants have received help from faith-based groups in Houston and El Paso as they seek to connect with relatives and sponsors throughout the United States.

Immigration hardliners criticize some of the efforts by religious activists, saying their efforts encourage still more migrants to come. But those providing the assistance see it as an extension of their religious mandate to help the needy.

“We are apolitical,” said Carlos Villareal, a Houston-area leader in the Church of Jesus Christ of Latter-day Saints, which has mobilized volunteers at a short-term transition center in Houston to assist hundreds of migrants arriving from Del Rio.

“Our concern is mainly with the families, that we can help them,” Villareal said. “It’s also the Golden Rule – do unto others as you would have done unto you.” The transition center was set up earlier this year at the request of the White House in response to earlier migrant surges, Villareal said. It provides the families with a place to shower, have a meal, and contact sponsors who would pay for their plane or bus tickets to join them while their cases go through the immigration process.

Most of the Haitian migrants are expected to ask immigration judges for asylum or some other legal status – requests that could be denied and lead to eventual deportation.

Villareal says he encounters migrants with stories similar to that of his parents, who immigrated from Mexico in search of a better life, not to be a burden on society.

“These people are just here seeking an opportunity,” he said.

Mobilization of faith-based groups began almost from the start of the sudden migrant surge in Del Rio, with Haitians converging from various Latin American countries to which they had fled from their beleaguered Caribbean homeland. Volunteers from a coalition of Christian churches and other groups in that region along the U.S.-Mexico border prepared more than 10,000 sandwiches for Haitian migrants camping under the bridge that connects Del Rio with Mexico’s Ciudad Acuna, said Shon Young, president of the Val Verde Border Humanitarian Coalition.

Their work began with about 20 churches and grew to more than 100 churches and other organizations, said Young, who is associate pastor at City Church Del Rio.

His church also collected donations, and the coalition set up an Amazon wish list that included juices, hand sanitizer and snacks. The response – from U.S. and Haitian organizations and from far-flung individual donors – has been overwhelming, Young said.

The camp held more than 14,000 people at its peak. Many of the Haitian migrants are being expelled and flown back to Haiti, but many others who gathered in Del Rio have been released in the United States, according to two U.S. ofﬁcials.

The Department of Homeland Security bused Haitians from Del Rio to El Paso, Laredo and the Rio Grande Valley along the Texas border, and added flights to Tucson, Arizona, one of the ofﬁcials said. They are processed by the Border Patrol at those locations.

The El Paso Baptist Association has been offering migrants COVID-19 testing and providing food, clothes and a place to sleep while they contact their family members or others sponsors. Since late July, the association has assisted more than 300 migrants, most of them Haitian, and was expecting many more to arrive from Del Rio, said Larry Floyd, the group’s executive director.

Catholic-led and other faith-based nonproﬁts have long been at the forefront of efforts to support migrants and asylum seekers along the Mexican border, providing crucial services on both sides of the Rio Grande.

Pope Francis has praised the work of Sister Norma Pimentel, the executive director of Catholic Charities of the Rio Grande Valley. Other well-known groups include Jewish Family Service of San Diego, which provides housing and other assistance to migrants, and Annunciation House in El Paso, which provides shelter to migrants while they arrange travel to other U.S. cities.

Annunciation House, which says its mission is based on Catholic social justice teaching, has geared up to receive several hundred migrants coming from Del Rio, said executive director Ruben Garcia.

At times, faith-based groups have injected themselves into a polarizing national debate over immigration policies. Although many praise their work to help migrants, some critics say it encourages more people to come to the U.S.

“A lot of these religious groups conflate two issues … they are rendering assistance to people who are in front of them who need help. That’s different from advocating government policy that would import more people like that,” said Mark Krikorian, executive director of the Center for Immigration Studies. The center favors more restrictive immigration policies.

Many religious leaders joined a call last week organized by the national nonproﬁt network Faith in Action urging President Joe Biden’s administration to stop deporting migrants to Haiti without giving them a chance to seek asylum in the U.S. and to protest their treatment after images surfaced of Border Patrol agents on horseback using aggressive tactics.

“That is unconscionable and cannot be tolerated today,” said the Rev. Alvin Herring, Faith in Action’s executive director.

The Network Lobby for Catholic Social Justice has called for more oversight of U.S. Customs and Border Protection. The network’s government relations director, Ronnate Asirwatham, says CBP has a “history of systemic abuse and racism.”

The group joined more than 160 Catholic organizations in a letter asking Biden to end Title 42 authority, named for a section of a 1944 public health law that then-President Donald Trump used in March 2020 to effectively end asylum at the Mexican border.

Herring, who traveled to Del Rio with other faith leaders to assess the situation ﬁrst-hand, says it is vital to press for Biden’s administration to make good on its commitments to migrants.

“We see the singling out of our Haitian brothers and sisters for this despicable abuse, which we believe is racist and immoral,” he said.

Contributing to this report, from Santa Fe, New Mexico, was Cedar Attanasio, a reporter with The Associated Press/Report for America Statehouse News Initiative.