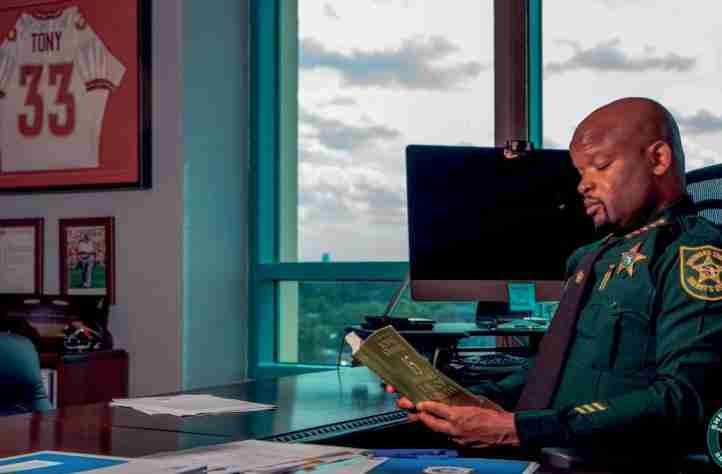 Fort Lauderdale, Fla. – After the suspensions of Hillsborough County State Attorney Andrew Warren and four of nine Broward School Board members following a grand jury ruling that they were incompetent and committed neglect of duty in the 2018 Marjory Stoneman Douglas High shooting massacre, Broward Sheriff Gregory Tony could be next on Gov. Ron DeSantis’ chopping block.

Tony has been under scrutiny since February when an investigation discovered he lied on his job application to become a law enforcement ofﬁcer and failed to disclose a DUI charge and that his driver’s license was suspended.

DeSantis, who appointed him in 2019, has yet to make a decision on whether Tony keeps or loses his job. According to reports, DeSantis could decide Tony’s fate sometime this week.

Tony has about 28 months remaining on his four-year term and police union bosses and the local GOP are pushing DeSantis, a Republican, to make his long-awaited decision.

In addition, some potential candidates who are seeking the position want to start campaigning for the 2024 election and want to know whether Tony will still be the sheriff, and if not, who will replace him.

During a Florida Department of Law Enforcement’s (FDLE) investigation, Tony provided false information when he applied for a police job in Coral Springs in 2005.

In February, the FDLE report said it discovered Tony failed to disclose that he killed someone when he was teenager in Philadelphia claiming self-defense, or acknowledge his past drug use and that his driver’s license was suspended several times.

But according to the report, the FDLE discovered that Tony was arrested on charges of murder and illegal weapons possession when he was 14 years old in 1993. Tony was tried for the murder of an alleged drug dealer in a Philadelphia neighborhood where he lived at the time.

According to the report, Tony said the shooting incident occurred after an argument he and his brother had with the alleged drug dealer. Tony was acquitted of the murder charge after claiming he acted in self-defense.

DeSantis, who appointed Tony to replace Scott Israel, who was removed for the way he handled the Parkland shooting massacre, said in February he would make a decision whether to suspend Broward’s top cop.

“We are going to review everything, take a look," DeSantis said in a statement then. "We saw the initial report. It will be something we will be reviewing in the coming days."

But police unions across the state said DeSantis was tied up with a busy legislative session in which he pushed through his sponsored bills including Don’t Say Gay and Stay WOKE bills, a 15-month abortion ban and changing the congressional map to beneﬁt the GOP.

Whether DeSantis acts or not, two state commissions that oversee police agencies may decide Tony’s fate.

A recent panel of a Florida commission is still deciding whether there is probable cause to revoke Tony’s law enforcement certiﬁcation following FDLE’s investigation.

If so, the Florida Criminal Justice Standards and Training Commission (CJS&T) would hear Tony’s case. If his certiﬁcation is rescinded, he could no longer be a police ofﬁcer in the state of Florida.

Tony would remain as Broward sheriff, however, because elected sheriffs are constitutional ofﬁcers, not required to be certiﬁed police ofﬁcers, but he wouldn’t have the power to make an arrest.