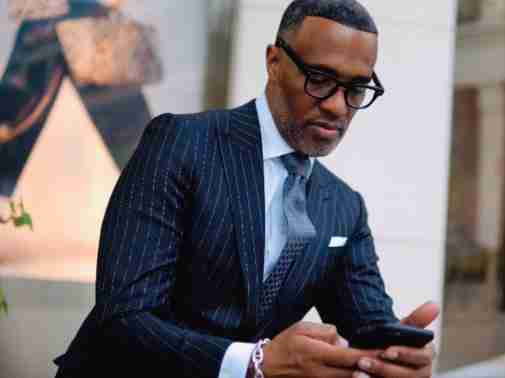 It was a rumor that somehow would not go away. It began early on the morning of May 5, 2022. A tweet begins to circulate across Twitter. That tweet sits languishing until it is shared on Instagram. Perhaps this is another one of those annoying celebrity death hoaxes. Yet, as the day morphs into night, it becomes plain that something is wrong. And then the other shoe drops. Celebrity social media blogger B. Scott confirms the rumor. The man many called “the Godfather,” YouTube relationship guru and image consultant Kevin Samuels, had succumbed to cardiac arrest in his Atlanta apartment.

Black social media descended into chaos and well-defined camps: Samuels super fans and apologists, and angry Black women. While many Black men who followed and ascribed to the philosophy of Samuels, were indeed crushed to learn of his demise, Black women rushed to their digital devices to eulogize the man who had made a substantial living that many times teetered and toppled across the lines of unconventionality and boorishness.

To say that Samuels was controversial is a generalization at best. Samuels was the benchmark of what an individual could do with a public platform on YouTube. In a span of four years, Samuels built a YouTube empire with over 1.45 million subscribers and at least fifteen videos reaching over a million views. One of his most popular videos, “You’re Average at Best” has almost 3 million views! His format was a simple time-tested formula: present a topic, offer an opinion, then open the phone lines to the audience. When Samuels entered the world of YouTube in 2018, he did so as a men’s corporate image consultant, advising Black men on how to change their image to become successful in corporate America. How could he do this?

Samuels began his career in the corporate world as a chemical engineer, a field he would enjoy for 20 years before being recruited to work in sales at a telecommunications company, where he would go on to become a national account manager generating millions in profits. Noticing the racial disparities in the corporate world, Samuels made the decision to pay it forward by mentoring Black men. The first two years of his YouTube channel reflected that mentorship with videos such as “Black Men Need to Cut Their Hair or Stay at The Bottom” and “Six Incredible Ways to Increase Your Cool,” “Get Yourself Together,” and “Reinvent Yourself.” But it was only when Kevin Samuels accidentally stumbled into the discussion of the socalled ‘high value man” that he struck gold. Admitting that the definition of the “high value man” referred to on his podcast is his “own spin,” with one unforgettable live stream, Samuels went viral and from there his channel took off. Black men who subscribed to the channel wanted to be a “high value man” and Black women wanted to learn how to attract a “high value man.” Kevin Samuels no doubt studied his analytics and adjusted his channel’s content to fit the influx of new subscribers. Samuels then re-branded himself from “men’s corporate image consultant” to simply “image consultant and lifestyle coach.” Now more inclusive, Samuels could pump out the content that his subscribers wanted. Black women made up reportedly 70% of Samuels subscribers, and these Black women wanted advice regarding the most sensitive areas of their lives, which Samuels was more than eager to give. And it is at this point where he becomes seriously and unequivocally problematic right up until his tragic death.

The consensus among Black women when the confirmation of Samuels demise spread throughout social media was thought to be one of elation and celebration. This was hardly the case. The reaction was one of irony. In re-branding his channel, Samuels overhauled his style from one of mentorship and instruction, to rude, abrupt, condescending, and tone deafness. Complete with special sound effects like a horse whip, barking dogs, pigs and elephants, and sarcastic quips taken from guests, Samuels thumbed his nose at the “Me Too” movement and demanded Black women calling into his show publicly disclose their age, dress size, and weight. In pushing forth the narrative of his “own spin” of what a “high value man” is, he told women that they were fat if they wore a dress size over a ten. He called the “old” and “leftovers” if they were 35 and older, with or without children, doomed to die alone and unloved, and each time a woman argued or disputed his ‘facts’ on their probable fate, Samuels labeled them “bitter” and “delusional.” He reveled in “rating” his female callers and Samuels’ live chat would come alive with Black men joining in with 2’s or 5’s which signified below average to average. In what seemed like an effort to add more subscribers and super chats, which equates to a sizable income, Samuels at times harshly described Black women he believed to be undesirable as “b****s and h**s.” Single Black women of every age with propriety and morals were jeered at by Samuels and told to lower their sexual inhibitions and standards in hopes of securing a potential mate. The male viewership loved Samuels new behavior and loyally defended his abusive nature. Black women, on the other hand, were disgusted and vocal about it.

It is easy to ascertain that Samuels amassed a fortune dispensing what some could rightly call “dating and relationship advice.” That is not an issue. What is problematic was the way and method that he chose to coach the Black women who legitimately came to him for help. The advice Samuels offered was of little to no benefit to those who needed it. What Samuels offered was a mixture of misogyny and classism. He believed that wherever a woman is in her life after 30, she will remain. There is no moving up or forward. Samuels was a straight misogynist in that he advocated for women to abandon ideas of higher education and career building, and in place of that, become wives and mothers. Single mothers, in Samuels’ opinion, can forget about marriage. Why? “A high value man doesn’t want to raise the children of a shady at best dead-beat father,” he concluded. Armed with what he liked to call “hard truths,” it’s difficult to conclude that Samuels originated his version of Dear Abby and Emily Post from a place where he wanted to help and support Black women. It would only be reasonable to judge that it was YouTube analytics and viral infamy that led Samuels down the path he was firmly rooted in at the time of his death. This is a certain truth that is not lost on Black women who are being asked to mourn Samuels in docility and in silence, instead of eulogizing him with the same criticism and cynicism that he used as a flamethrower to incinerate their hopes and dreams of love and wedded bliss. Some Black men, sycophants of Samuels, want to argue that the manner in which Black women are eulogizing him is an act of “bullying the dead,” when in reality it is with the very same fervor and energy that Samuels created for YouTube “likes” and monetization at the expense of Black women that is being returned to the sender.