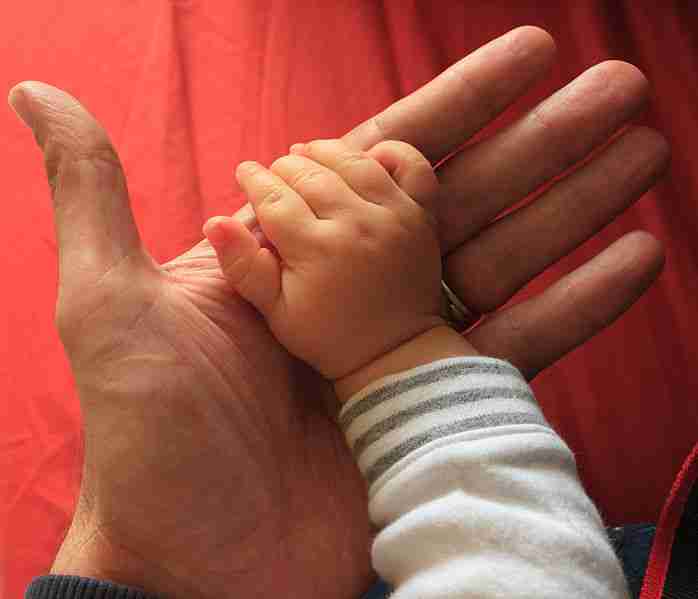 In 2015 Kinsella used paid vacation time to spend two weeks with his firstborn, Olive. Kinsella used the same benefit to attend Everett’s birth, but thanks to the company’s new policy, he plans to take two more weeks next month using the paid parental leave benefit to care for the kids and help his partner Sydney get ready to go back to work.

“It gives us a lot more flexibility,” Kinsella said of the new benefit. First Data, a credit-card processor and payments technology company, has more than 5,000 Omaha employees.

For some expectant parents, 2016 was a banner year and December a flag-waver: More than two dozen large employers announced that they would bolster their paid family leave benefits. In December alone at least eight large companies – including First Data, American Express and Ikea – joined the list, said Romy Newman, co-founder of fairygodboss.com a website that tracks parental leave benefits.

“We’re in the midst of a parental leave arms race,” said Newman, a former Wall Street Journal executive who started the website focused on women and their careers. “There is a `race to the top’ in terms of which companies are improving their U.S. parental leave policies to be more generous and more comprehensive,” she said in an interview.

The Omaha World-Herald (http://bit.ly/2j64Fia ) reports that while salaried workers were the main beneficiaries, some companies, such as Netflix, Ikea, Levi Strauss & Co. and Chobani, said they would be offering paid parental leave to eligible hourly employees.

In addition, more employers are adopting gender-neutral policies, offering men and women the same benefit of paid time off or allotting the greater amount of paid time off to the primary caregiver, regardless of gender.

Still, only 13 percent of U.S. private-sector workers were offered paid family leave last year, compared with 12 percent in 2015, according to the U.S. Department of Labor.

First Data is among those that scrapped the maternity and paternity categories and opted for benefits that recognize primary and secondary caregivers, regardless of gender, said Karen Whalen, the company’s senior vice president of human resources.

“We wanted to create something that was gender-neutral,” Whalen said. “The traditional maternity and paternity leave didn’t work.”

In discussions about crafting a family-friendly policy, “we heard from birth mothers whose husbands or partners were the primary caregivers,” she said.

“We’re recognizing that there are all different flavors of families,” including single parents, traditional families and same-sex couples who plan to give birth, adopt or foster a child, she said.

PayPal, which also has major operations in the Omaha area, began offering eight weeks of paid leave for expectant mothers as well as eight weeks of bonding leave for mothers and fathers at full pay for eligible employees last January. Previously, mothers received eight weeks of maternity leave at 80 percent of their pay.

Elsewhere in the area, Creighton University offers eligible employees who are new mothers or fathers four weeks of paid family leave. Other employers, such as Union Pacific Railroad, allow eligible employees to apply for up to 12 weeks of family medical leave. Mothers are entitled to income replacement benefits for the period of disability because of childbirth, typically six to eight weeks, U.P. spokeswoman Calli Hite said.

John Schembari, a Kutak Rock attorney who consults with Omaha companies on workplace issues, said “there is still a `buzz’ about paid parental leave on the coasts, but I have not seen many Midwestern companies make major changes.”

There is a push in the Legislature to change that: State Sen. Sue Crawford of Bellevue last week introduced Legislative Bill 305, the Paid Family Medical Leave Insurance Act. The bill would create state leave insurance that would allow employees to take paid time off to care for themselves or family members, Crawford said.

Eligible workers would be allowed to take up to 12 weeks of paid time off to care for a child or up to six weeks to care for an adult, such as a parent or spouse, Crawford said. Mandatory employee contributions would fund the program, relieving employers of having to pay their wage.

Michelle Zych, executive director of the Women’s Fund of Omaha, said that offering paid family leave is a necessary benefit if businesses want to attract and retain talent and remain competitive.

She based her comments on the findings of the fund’s 2016 Women in Leadership report, an assessment of women’s influence in the area’s professional community and their standing at major corporations and organizations.

“While many companies offer new birth moms 6 to 8 weeks of paid leave as part of their short-term disability plans, this doesn’t offer any support for same-sex couples, those who are adopting or fostering kids, or fathers,” Zych said. When the support is missing, it can be challenging for women “to share the responsibility of parenting and continue on their paths to positions of power and influence within their companies.”

The Women’s Fund, a nonprofit, offers 12 weeks of paid leave for new parents.

The 1993 federal Family and Medical Leave Act allowed men and women to take up to 12 weeks of unpaid leave to care for a child or a sick relative, but it applies only to employers with 50 or more employees. Because of the restriction, more than 40 percent of workers employed at smaller companies aren’t covered by the federal law. Millions of other workers cannot afford to take unpaid leave, according to the White House Council on Women and Girls.

Technology companies such as Netflix, Facebook, Microsoft and Adobe Systems were among the first companies to offer generous paid time off terms to new parents.

But in the past year or so, retailers, manufacturers and food producers have begun expanding the list.

“I remember how challenging it was when I was pregnant and just starting my career journey. … At the time, my boss actually told me that if I was not back immediately after the six weeks allowed by my company’s disability policy that `Bob Smith’ (I’ve changed his name to protect him!) would be more than happy to take my seat,” she said.

There’s also another force pushing the pram: municipal and state laws in place or on the horizon that mandate paid parental leave, Kutak Rock’s Schembari said.

San Francisco has a paid parental leave law that went into effect this month. Washington, D.C., is considering a similar law, and New York state has one that goes into effect next year, he said.

“As these state and local laws gain more traction, I expect to see many more employers increasing their paid leave programs,” he said.