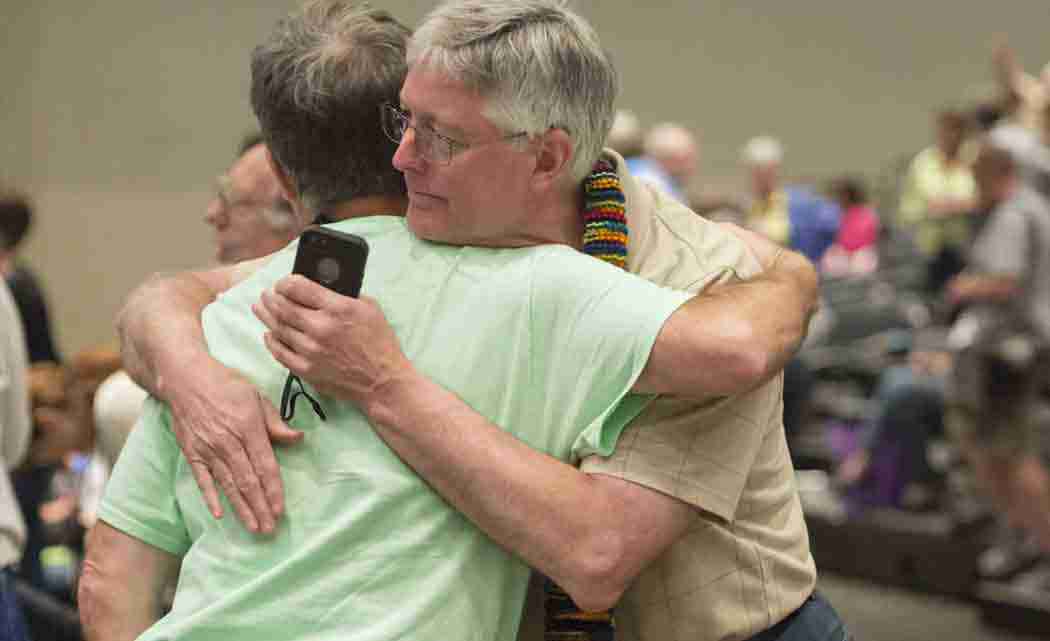 NEW YORK — The Presbyterian Church (U.S.A.) has expanded its definition of marriage to include a “commitment between two people,” recognizing gay marriage as Christian in the church constitution after decades of debate over same-sex relationships.

The redefinition was endorsed last year by the church General Assembly, or top legislative body, but required approval from a majority of the Louisville, Kentucky-based denomination’s 171 regional districts, or presbyteries. The critical 86th “yes” vote came Tuesday night from the Presbytery of the Palisades in New Jersey.

“So many families headed by LGBTQ couples have been waiting for decades to enter this space created for their families within their church communities,” said the Rev. Robin White, a leader of More Light Presbyterians, which advocates for gay acceptance.

After all regional bodies finish voting and top Presbyterian leaders officially accept the results, the change will take effect June 21. The denomination has nearly 1.8 million members and about 10,000 congregations and is now the largest Protestant group to authorize gay weddings churchwide.

Last year, Presbyterians allowed ministers to preside at gay weddings if local church leaders approved in the states where same-sex unions were legally recognized. The new wording for the church Book of Order extends that authorization to every congregation and reads, “Marriage involves a unique commitment between two people, traditionally a man and a woman, to love and support each other for the rest of their lives.”

The amendment includes a provision that no clergy would be compelled to preside at a gay marriage or host such a ceremony on church property. So far, 41 presbyteries have rejected the redefinition and the vote in one presbytery was tied, according to a tally by the Covenant Network of Presbyterians, which advocates for gays in the church and also works to keep Presbyterians united despite theological differences.

In statements Tuesday, church officers urged “mutual forbearance” amid disagreements over the amendment. “We hope that such ‘up/down’ voting does not mark the end, but the continuation of our desire to live in community,” the two top General Assembly officials said.

Between 2011, when the Presbyterians authorized gay ordination, and 2013, the latest year for which figures are available, 428 of the denomination’s churches left for more conservative denominations or dissolved, though some theological conservatives have remained as they decide how to move forward. The losses helped pave the way for approval of gay marriage, since many opponents had left the church.

Carmen Fowler LaBerge, president of the conservative Presbyterian Lay Committee, said the new definition was a repudiation of the Bible and approved “what God does not bless.” She urged Presbyterians to protest by redirecting donations away from the national church until the original marriage definition is restored.

The Rev. Paul Detterman, national director of The Fellowship Community, a network of conservative Presbyterian churches that have stayed with the denomination, said his organization will “remain faithfully engaged in conversation” with those of different views in the church. He said the Fellowship’s opposition to the amendment is not intended to be anti-gay but aims to uphold the traditional Bible view of marriage.

Although several Protestant denominations have taken significant steps toward recognizing same-sex relationships, only one other major Christian group has endorsed gay marriage churchwide.

In 2005, the 1.1 million-member United Church of Christ became the first major Protestant denomination to back same-sex marriage, urging its individual congregations to develop wedding policies that don’t discriminate against couples because of gender.

The Episcopal Church, which blazed a trail in 2003 by electing the first openly gay Anglican bishop, Gene Robinson, does not have a formal position on gay marriage, but allows bishops to decide whether their priests can officiate at the ceremonies. Episcopalians will take up gay marriage at a national meeting in June.

The Evangelical Lutheran Church in America, which eliminated barriers to gay ordination in 2009, takes a similar approach, allowing some discretion by clergy and congregations to officiate at same-sex ceremonies without formally recognizing same-sex marriage as a denomination.

The United Methodist Church, the second-largest Protestant denomination in the U.S., bars “self-avowed practicing homosexuals” from ordination and prohibits gay weddings. Many Methodist clergy have been performing gay marriages as a protest of church policy.

The Rev. Brian Ellison, executive director of Covenant Network of Presbyterians, said he recognized there will be disagreement about the new marriage definition.

“We’re very committed to helping the church continue working through this issue,” he said.

Previous post Smashed your HTC One? No problem, they'll replace