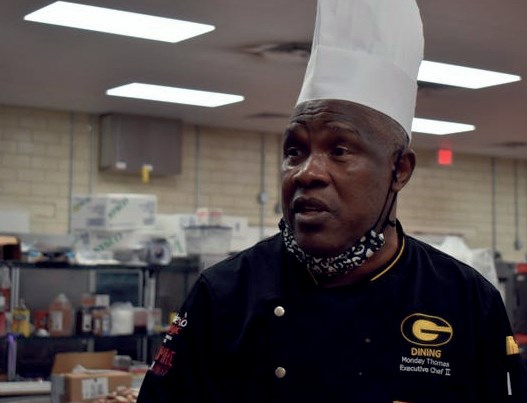 GRAMBLING, La. (AP) – At the McCall Dining Hall at Grambling State University, the line for the Chef’s Table snaked through the building. Students, faculty and staff waited patiently in line for a chance to eat chicken curry, jerk chicken, jollof rice, fried plantains and more of what Chef Monday Thomas had to offer for lunch on Oct. 26.

Thomas, who hails from Lagos, Nigeria, has travelled the world, learning the dishes and flavors of each country he visits. After years of sharing his food through restaurants – including one of his own – he has brought his years of culinary expertise to the students of Grambling.

“I don’t want to have mundane food,” Thomas said. “It’s very important to me.”

Since taking up the new position, Thomas has brought fresh flavor and dishes to the dining hall options at Grambling, exploding the stereotype of bland, substandard cafeteria food.

And the students, faculty and staff can’t seem to get enough. The long line on Oct. 26 of students wanting to try Thomas’s food is one example of several in just the three months he has been livening up the kitchen.

Thomas began his culinary journey in the United Kingdom as a college student. At the time, he studied marketing and purchasing while working at a local grocery store.

“THE TALKING DRUM” There, he would occasionally flip through the food magazines on the rack and a regular customer took notice. Eventually, the customer asked Thomas to come work for him at a Holiday Inn. From there, Thomas worked his way into the kitchen and up the ranks as a chef.

The job brought him to the United States, and he later studied culinary arts and food service management at Oklahoma State University. He joined the American Culinary Federation, and in 2004 opened his own restaurant in Tulsa called “The Talking Drum.” The restaurant was the only one of its kind in the Oklahoma city, serving up Caribbean and African dishes, and his work was recognized in the Taste of Tulsa awards.

Beyond the U.S., Thomas has visited several countries across the globe, including France, Burkina Faso and Zimbabwe. With each new place Thomas visits, he makes sure to pack a chef’s uniform, meet the chefs at the places he eats and memorize their signature dishes.

CATFISH AND ALLIGATOR Later, when he’s making the dishes on his own, he adds in his own spices and flair. Even when he came to Louisiana, he took the time to ﬁgure out the local dishes and ingredients – catﬁsh, alligator – and how he could best play with them.

After his restaurant closed in 2008, Thomas thought about teaching the art of cooking but realized he’s best when he’s busy in the kitchen. Eventually, he said he would love to create another restaurant, but he has settled in at Grambling, producing meals for everyone to enjoy.

When he makes his rounds about the kitchen, he focuses in on the food. As he walks about the cafeteria, he draws in close to the students and anyone with a plate in their hands asking, “What do you like to eat?”

Thomas said it’s been enjoyable to see long lines of people waiting to try his food. For him, satisfying the hungry mouths at Grambling is better than any sum of money.

“I derive pleasure in what you eat, how you feel,” Thomas said. “I derive joy.”