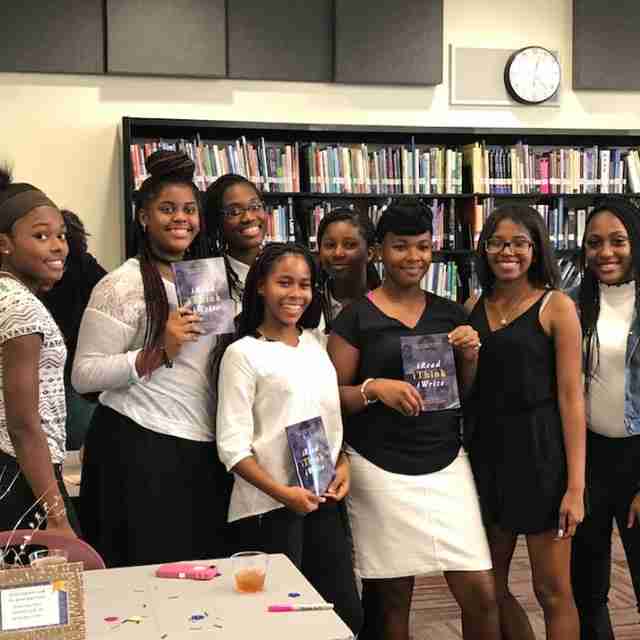 Norland students wrote stories about their lives that are now published in the compilation book, “iRead, iThink, iWrite.”

MIAMI GARDENS, Fla. – Norland Senior High School was buzzing on Tuesday, May 30. The media trucks and cameras were visible. Many visitors could be seen going and coming.

Since the school is located in a high crime ridden area of Miami Gardens, one might have thought another offense had been committed and a round up for questioning was about to ensue. Unfortunately that’s the typical expectation, but fortunately that day the reality was quite different.

The media and visitors present were invited to support, promote and participate in a book signing for “iRead, iThink, iWrite,” a compilation of stories, narratives and poems about their lives written by Norland students, now sophomores, who were part of the ‘Freshman Experience,’ an elective at the school, during their ninth grade year.

The most poignant observation Moton made, however, was the running theme of dreams deferred. Many of the students expressed utter despair and only saw a bleak future ahead for them if they made it to adulthood.

After hearing the stigma students held of growing up in Miami Gardens, also called “Murder Gardens” by some, Moton was determined to re-establish some semblance of hope for a bright future for her students.

She assigned students to read, “We Beat the Street,” the true stories of Drs. George W.

Jenkins, Rameck Hunt and Sampson Davis – a group of friends who grew up in poverty in a tough New Jersey neighborhood, but made a pact to get through high school, college and medical school together. Today they are all successful physicians and motivational speakers.

After reading the book and noting how the students responded to learning about people who’d grown up in similar circumstances, but overcome the odds, Moton proposed a project to stimulate the students’ creative juices.

What if her students wrote their own stories too? After reading the stories, Moton decided to publish them. And she did, with the help of a grant and some of her own money. As a result, “iRead, iThink, iWrite” was born.

One student, Asayah Rodney, wrote a poem called “Words Hurt.” Rodney, who emigrated from Jamaica when she was in fifth grade, was often bullied about how she looked.

“Tears poured down my face. I wanted to lay down and die. I felt so torn apart. People have no idea what they say makes me mad,”

Other students spoke of issues like homelessness, losing a parent, etc. Most said it was hard to face some of the things they’ve gone through, but they hoped their stories inspired and encouraged others.

This project shows there are ‘good’ things happening in Miami Gardens. There are many positive stories like this one that often go untold, in which teachers and students of Miami Dade County Public Schools are making remarkable accomplishments.

There are teachers that work tirelessly, often by their own sweat equity, to provide “out of the box” education and experiences for their students because they know it stimulates the young mind and fosters a fearless outlook for a brighter future.

Moton is one of them. She believes effective educators acknowledge and address their students’ experiences.

“We actually talk about establishing long range and short range goals, how to identify colleges … There are some self-esteem issues, dealing with the death of a family member, being bullied,” Moton told WLRN in an interview. “You have to be able to identify who you are, not take a backseat to people judging you. Be who you are, stand up on the inside and be confident. … You don’t have to become a victim of your community, but you can become a success.”