Origins and history of the black funeral service 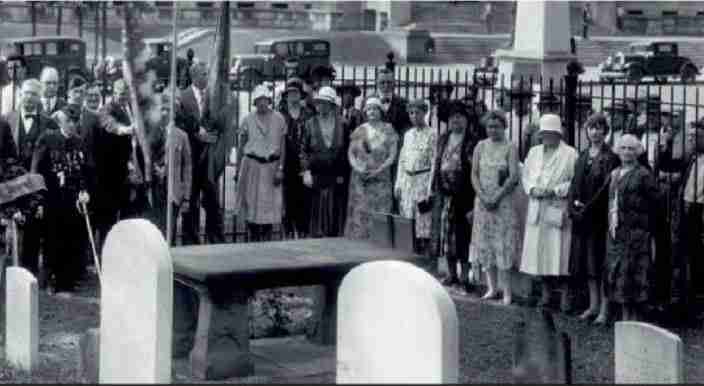 Members of the Bergen County Historical Society laying a wreath on General Poor’s grave in the early twentieth century.

PHOTO COURTESY OF JOURNAL OF THE AMERICAN REVOLUTION

The history of Black Funeral Service has its roots in Ancient Egypt. Ancient Egypt was an African country ruled by African people, a people whom historians credit with developing techniques of embalming and preparing the dead for funeral services.

Their practices were elaborate, using cloths, spices and special techniques to preserve the body. The practice of preserving the dead for a long period of time and placing them in a container for a funeral and burial, was started by these Ancient Egyptians, people of color. This is a common practice observed throughout the world today.

In America during slavery, it was against the law for blacks to give their loved ones a decent funeral and proper burial. In the early years of slavery, they were prohibited from gathering together in any form. Slaves could not assemble or meet in a group at all for fear that they would revolt against their masters.

If they broke the law, slaves were beaten or killed. The deceased slave was usually buried without ceremony on non-crop producing land in unmarked graves, sometimes dug by slave children too young to work in the fields.

Therefore, the first African Americans were denied the opportunity to mourn their loved ones together and were not given a chance to publicly celebrate the life lived. But when a member of the master’s family died, house slaves were given the responsibility of washing, preparing and dressing the dead. They also had to plan the repast, the gathering of family and friends after the funeral.

Eventually, slave rebellions occurred and slave owners were forced to make changes and concessions in order to keep the peace. They began to allow families to live together, but this did not stop them from separating and selling them if they chose.

With the introduction of Christianity, slave owners began to allow slaves to meet for religious services and funerals. Whites were reportedly shocked at the behavior of slaves at funerals, because they were happy, jubilant and celebrated the home going of their loves ones. The slaves, understandably, had no hope of returning to their homeland, so death was seen as going to be with Jesus and symbolized going home.

Death was also seen as a relief from the agony and humiliation of slavery. Slaves looked forward to leaving their raggedy shacks for their “mansion in the sky.”

During the Civil War, black soldiers were responsible for removing dead bodies from the battlefields and kept records of burial sites for soldiers killed in combat. Embalming was necessary to preserve the bodies of union soldiers, killed in the south, so that they could be shipped back home for services and burial in the north. Black assistants to military doctors were trained and did much of the embalming.

Given the fact that black slaves prepared the dead, dug graves and maintained the cemeteries, blacks were the most qualified for occupations in funeral service.

“Funeral Parlors” were among the first businesses opened by blacks after slavery was abolished. Around the 1900’s black churches began forming Burial Societies. They collected money from church members to pay for their funerals, coffins and graves. (This is a forerunner to what we now know as pre-need funeral plans, where a person can pay, in advance, monthly towards a funeral).

Black funeral homes began opening their doors at this time, because there was now money to support these businesses.

In the early 1900’s most blacks lived in rural communities (which my family calls “in the country”) and whites lived in the cities.

Therefore, the first funeral directors had the challenge of driving long distances over dirt, bumpy country roads in horse drawn carriages to care for the dead at the family home.

When someone died at home, they were laid on a “cooling board” for purposes of preservation and the funeral director had to provide the ice for the cooling board. In these rural communities, the deceased was often casketed and viewed in the family home.

In the 1920’s blacks started moving into the industrial cities to get the good manufacturing jobs. Blacks were allowed and encouraged to go to mortuary school and start businesses in order to service the increasing numbers of blacks that were moving to the cities.

Racism and prejudice were alive and well and many white businesses preferred not to handle black bodies. My father’s uncle, Jimmy Woods, was encouraged by a staff from a white mortuary in Pasadena, to get his embalming credentials and start a business.

In 1928, he opened the doors of James Woods Funeral Parlor.

It was common practice for blacks to convert the bottom floor of their private home into a Funeral Home, which were then most popularly called “Funeral Parlors.” Most black funeral homes I’ve visited still have the mortuary on the bottom floor and a residence on top.

It has been said that only four institutions in the black community survived the desegregation of American Society: the Black Church, the Black Beauty Salon and Barber Shop, the Black Cocktail Lounge and the Black Mortuary.

The Black Mortuary was unique because it usually started as a family business and was passed on from generation to generation. The black funeral director is a community member who has traditionally been trusted, respected, viewed as a leader and seen as compassionate, knowledgeable and resourceful. Funeral Service is, and has long been, a worthy profession.

The history of Black Funeral Service is a long and rich history that dates back to Ancient Egypt then continues through slavery, the Civil War and integration.

Blacks have a long legacy of, expertise in, compassion for, and commitment to funeral service.

PLEASE NOTE: This article has been slightly edited for brevity and clarity. For more articles and resources, visit www.woodsvalentinemortuary.com.