This is the day that Oprah made. Winfrey celebrates Estella Pyfrom’s commitment to children 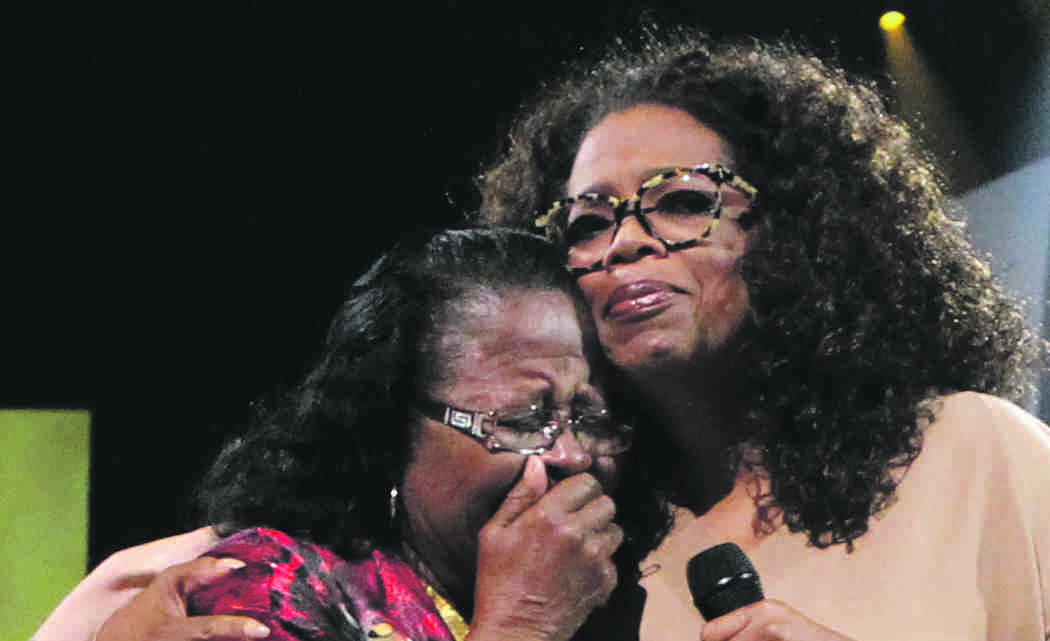 Oprah’s the Life You Want Weekend Tour, which stopped in Miami October 24 and 25, was part pep rally, part concert-like atmosphere, and all about self introspection. Judging the audience’s actions, their dancing, laughing, and crying spoke volumes of how they enjoyed the two incredible days with Oprah and her trailblazers.

But the weekend was also hugely inspirational, with Oprah and her hand-picked speakers doling out huge doses of it (inspiration) with their personal stories of triumph over difficulty. But by the end of Saturday, the crowd of 20,000 screaming Oprah fans couldn’t have been more inspired than by the story of local West Palm Beach resident Estella Pyfrom, who was honored by Toyota and Winfrey.

In each market of the tour, Toyota announces a “Standing O-Vation” winner – an extraordinary person who is making a tremendous difference in their local community by changing the lives of others. Pyfrom was selected as the winner in Florida and found she was not only standing hand in hand onstage with Winfrey, but even cried on Oprah’s shoulders after watching her own story featured on the large screens at the AmericanAirlines Arena. It was a moment to behold for everyone in the arena, who cheered wildly in awe over the amazing woman’s life story. Winfrey, Pyfrom, and Dancing with the Stars finalist and Paralympics medalist Amy Purdy, who represented Toyota, all were in tears as the details of Pyfrom’s life played out onscreen.

“Estella,” as she is affectionately called, was honored by Toyota and Winfrey for her innovative creation, “Estella’s Brilliant Bus,” a mobile computer lab on wheels that travels to impoverished neighborhoods teaching underprivileged kids computers and education. To date, Pyfrom has serviced over 60,000 students with her “Brilliant Bus.” Her mission to bring technology to the less fortunate has taken her to the White House to meet Presidents Barack Obama, and former President George H.W. Bush, where she was honored as a “Daily Point of Light” for changing lives.

But ironically, not even her White House honors brought her to tears like her moment onstage with Oprah Winfrey, the world’s most powerful woman! Pyfrom said she was so overwhelmed with emotion standing in Oprah’s arms, because Oprah was clearly moved by her story and that touched her heart. “I was so emotional when Oprah was telling my story because Oprah was emotional and in tears.  She made me feel like she was relating to me and she could feel my happiness.  My tears were tears of joy and because of my assurance in knowing that I could continue to serve more children.  For a moment, I was in disbelief that what was happening was really a dream and was not really happening!” said Pyfrom, a day later from her West Palm Beach home.

But the surprises continued onstage. Winfrey was so inspired and impressed by Pyfrom’s work on behalf of children, that she made a financial contribution to her cause as well. Toyota awarded Pyfrom a $25,000 grant, and Oprah matched it with another $25,000 for a total of $50,000 towards “Estella’s Brilliant Bus.”

“Look at what one woman can do!” Winfrey said onstage. “One woman! That was an amazing story. It really was,” she said after watching the piece onscreen. “I would like to say, I’m going to match that (Toyota’s) $25,000. Thank you for using your life as a force for good. And at 77! Congratulations so much,” Winfrey said to Pyfrom after the presentation. The two embraced. Pyfrom said it’s a moment she’ll never forget. “Oprah was so passionate about the giving and was holding me like you would not believe. I love that lady,” Pyfrom said, still emotional.

Backstage at the arena, Pyfrom was bombarded with questions by the media, wanting to know how she does it at her age and if indeed she was surprised that Oprah was moved enough to donate to her non-profit bus operation. “I was shocked but happy when Oprah decided that she would match Toyota.  My thoughts:  To God Be The Glory! But that’s Oprah. She is always giving from the heart. That was an incredible moment.  I really needed that donation.  I can continue to serve more children and take care of some operating costs such as hiring one administrative assistant and purchasing additional curriculum. Thanks to both Toyota and Oprah,” she told reporters.

It was at the age of 71, when Pyfrom took her and her husband Willie’s retirement and investment funds and purchased the tour bus with plans of starting “Estella’s Brilliant Bus.” She outfitted the bus with 18 sleek, high tech computers equipped with Wi-Fi, Internet and all the bells and whistles. She put adjustable, swivel chairs on the computer bus planning to service both small tots as well as adults. But Pyfrom put the project on hold due to an illness suffered by her husband. She patiently waited until he regained his health, and in 2012, she got the bus up and running, and it’s been non-stop ever since. She takes the bus to schools, daycare centers, community centers, stadiums and anywhere she’s needed. To date, the Pyfroms have invested $1 million of their own money into the project because she is determined that no one, regardless of race, creed, or economic status, will be left behind in this technological society. ‘My father taught us that if you want something, you have to do it yourself,” she said matter-of-factly.

But the fact that she’s making such a difference, yet she continues to pour her own funds into the project doesn’t sit well with Guarn Sims, Principal of Village Academy, a unique model school located in Delray Beach. Pyfrom brings the bus to his school weekly, and Oprah’s crews filmed there. “It’s hard to see that someone with this kind of impact and yet she still has to go into her personal pockets to finance it. I don’t get it and I’m struggling with that. She’s spending her life’s savings to keep this afloat,” he said empathetically. He wants to see more donations and sponsorships for the bus, just like Winfrey’s. Microsoft, Comcast, and Office Depot have donated some services and some cash. But Pyfrom too, said she could use more local financial support for the project. Her biggest goal right now is to pay staff, who is all volunteers. “I work 20 hours every day,” she said. “Maybe if I can pay staff, I can cut that down to 15 hours a day!”

Before retirement, Pyfrom and her husband were both educators in the Palm Beach County school system. She grew up in Belle Glade, the daughter of migrant workers who worked in the fields harvesting crops as a child. She eventually got her Bachelor’s and Masters Degrees from Florida A & M University. She taught in the Palm Beach County school system for over 50 years, while Willie Pyfrom taught music and was band director at Glades Central High School for over four decades. All of their children are college graduates, some with PH.D’s. She and her husband know the value of education. She not only provides computer services free of charge to anyone from ages 3 to senior citizens, but she also offers FCAT training, GED preparation as well as college prep and pre-kindergarten training on the bus.

She was invited by Essence Magazine to bring her bus to New Orleans for the Essence Festival’s first ever #YesWeCode and Technology Village this summer. Pyfrom took nearly 100 students with her, and her boys and girls both won first place in a coding contest, building mobile apps, competing with kids from all over the world. Ironically, Pyfrom didn’t even learn the computer until she was 70, but today she is as tech-savvy as any teenager. “I know about the digital divide, and I’m committed to changing that. I know what it’s like to be in low income and not have the resources to compete in life. We are taking the technology directly to the people,” she stressed.

Her dedication to bridging the digital divide and her tenacity has caught the attention of many local as well as national individuals, media and organizations. Last year, she was selected as a Top 10 CNN Hero, a telecast hosted by CNN’s Anderson Cooper and seen worldwide. She has been featured on the NBC Nightly News with Brian Williams, which resulted in the Microsoft donation. She’s been featured in Essence Magazine, JET, Huffington Post and numerous other local and national publications. She has been contacted by the Steve Harvey TV Show as well as the Queen Latifah Show to have her as guests on their national TV shows. Her local awards and honors are too many to mention. But through it all, her trademark is her humility! Pyfrom says she still can’t believe she is getting such worldwide attention for doing something she says simply comes natural: helping people. “When I started this project, I envisioned that it would touch a multitude of people. But I didn’t think it was going to happen this quick,” she said in disbelief.  “I didn’t actually think of who, but I knew it was going to be huge because I want to help many people.  Eventually the President and people like Oprah – this is amazing! To God be the Glory! I am so thankful. I owe it all to Him!” she exclaimed. Her ultimate goal is to have more buses, with hopes of replicating the Brilliant Bus all over the United States and worldwide. She told Oprah that she plans to go on for another 35 years with her “Brilliant Bus.”

Oprah’s the Life You Want Weekend Tour will make two more stops before it wraps. The tour will stop in Seattle, Washington November 7-8 and in San Jose, California November 14-15. For more information, visit www.oprahweekend.com.

For more information on Estella’s Brilliant Bus, which is a 501©3 organization, or to make a contribution, please call 561-985-1889 or email her at wepyfrom@comcast.net. Daphne Taylor can be reached at journeynews2@gmail.com

Next post Current state of education discussed with community