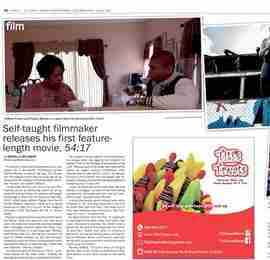 If creativity, moxie and perseverance are necessary for a successful film making career, Frantzy Moreau is well on his way. The 26-year old Homestead native had his eyes set on attending the film program at Florida State University; however, he couldn’t afford it.

Undaunted, Moreau set out on his own film- making course by devouring books on all aspects of making movies. He used his self-taught knowledge to shoot his first feature length film, 54:17, which stars JoMarie Payton from the hit Family Matters television show and is being screened on May 14 at 8 p.m. at the Flagship Cinemas, 2250 Northeast 8th St. in Homestead.

Moreau’s perseverance proved pivotal in landing Payton. After she gave him her card at an event, he called her repeatedly, leaving message after message until she called him back. “You have two minutes. I’m a very busy lady,” Moreau said Payton told him. Seizing the moment, he said he talked nonstop for the two minutes, pausing to catch his breath and waiting for what seemed like forever to hear her say, “I think this was destined,” Moreau shared.

He said the name of the movie, 54:17, “is actually based off the bible verse,” reciting the passage by heart during our telephone interview.

“No weapon formed against me shall prosper. No tongue shall rise against the kingdom of heaven. This is the heritage of the people of the Lord,” Moreau said of the verse that inspired the movie he began writing immediately after Trayvon Martin was killed in 2012. He started filming in 2013 before the trial began that resulted in George Zimmerman being acquitted of murdering the 17-year old. “It took us about two and a half years. We had literally no budget,” he said of the film making process that ultimately cost him and his “wonderful sister” approximately $5,000. “

He described the film like this: “It’s basically an homage to the bible verse and Isaiah, the main character’s journey. His father was a gunsmith. He spoke this verse over him when he was born. Isaiah then later on became a gunsmith. He starts having visions of scenarios like Michael Brown and Trayvon, and kids being slain by guns and he’s conflicted about continuing his career,”

Moreau added, “It’s just a story of trying to do the right thing. Trying to understand what your destiny is and save people at the same time.”

A full circle moment could occur in the fall if plans to screen the movie at FSU are confirmed.

Moreau said, “54:17, this film is bigger than just a movie, it’s a movement.” He wants the movie and the bible statement on which it is based to help build confidence in youth.

“They don’t necessarily need to be afraid of cops and the powers that be. Ultimately they hold the power and they can change what’s going on and not necessarily the people who have this illusion of power.” When black youth remember who they really are, he said, their fear will disappear. “We’re vessels of God and if He’s on our side then we don’t have anything to fear.

Find out more about the movie at Facebook.com/54:17movie.