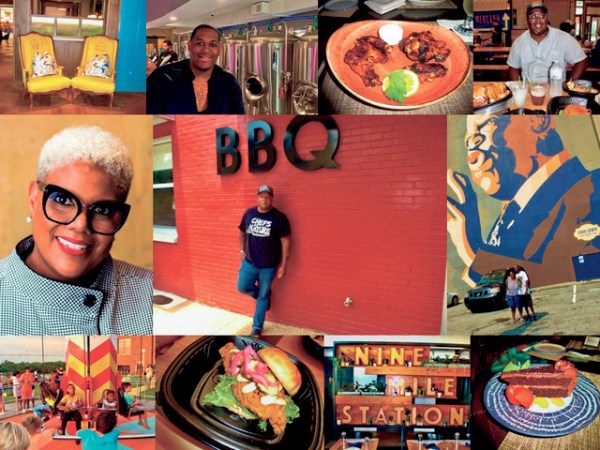 Atlanta, Ga. – Explore Atlanta, Ga., arguably the capital of the New South, and you’ll be embraced by a multicultural city led by a Black mayor and blessed with forward-thinking electorates who made Fulton County one of the most pivotal voting blocs in the country.

These erudite Atlanteans are forging a new world, creating a vibrant food scene, supporting the arts, respecting their historic districts and welcoming anyone who wants to share the experience.

SF&C stands out at the Krog Street Market, an historic food hall located in what was once Tyler Perry’s ﬁrst studio and before that an iron-pan factory (circa 1889).

Secret spices, gluten-free options and innovation propel this contemporary restaurant to the top of ATL’s most contemporary cuisine. How inventive? How new? They’ve created “Waffles Infused with Collard Greens!” It’s ingenious! The bitterness of the greens, the flaky light waffle, the fat from a dab of butter and the sweetness of maple syrup blend together in a way that will make your tastebuds scream: “Wow!”

Richards and Lee are going places African American restauranteurs have never been. “We are the only minority Black-owned restaurant on the BeltLine,” said Lee. Their ambitious menu is redeﬁning what soul food can be.

The in crowd in ATL gathers at Ponce City Market in the Old Fourth Ward. This former Sears catalogue facility (circa 1926) has evolved into a multi-purpose, cultural/food/retail space/amusement park that’s fun-time central.

Popular cafés, restaurants and bakeries line the ﬁrst floor. A ﬁve-floor elevator ride takes you to a rooftop with unobstructed panoramic views. Gaze at ATL’s multitude of skylines: downtown, BeltLine, Piedmont Park and surrounding neighborhoods and the beauty envelopes you.

What’s surprising and pleasing is the potpourri of families, couples, singles, Blacks, whites, Latinos and Asians, gay, straight young and old. The kids are riding on amusement park rides or hurtling down big slides. Adults engage in mini golf.

There are several eateries on the massive veranda and 9 Mile Station is the key one. Eat indoors at the popular bar, sip on craft beers and ogle the open kitchen. Or sit outdoors for the amazing vistas, the main attraction.

Owners Kelvin and Mandy Slater welcome customers like family. The vibe alone is alluring. Add in the comfort food and it’s no wonder reservations are required. The place is packed!

Chef Deborah VanTrece has created a friendly environment that pulls locals in the quiet West Side neighborhood from their homes to her oasis restaurant for lunch, dinner, drinks and socializing. Her restaurant is a mecca for African American, LGBQT and other cultures that meet, greet and eat. Everyone is welcomed. Everyone is there.

VanTrece’s modern interpretations and global influences on traditional Southern soul food sets her establishment apart. Diners sit inside or outside in the fresh air chowing down on food that tastes like it came from their momma’s kitchen – if their moms were influenced by Black and international cuisines.

The food is comforting, the atmosphere laissez faire. You come in with a smile that only grows bigger as your meal is served and crowned with dessert.

Opened July 4th weekend 2020 on the border of ATL’s East Lake and Oakhurst districts, the savory Lake & Oak Neighborhood BBQ joint has become the bridge between the two neighborhoods.

The amiable personalities of cochefs/owners Todd Richards and Chef Josh Lee have produced a warm, convivial atmosphere. Their down-home brining, smoking and cooking techniques can be tasted in every savory item.

Charcoal and white oak and pecawoods add taste and flavor. Novel seasoning and innovative techniques take their BBQ to another planet. Richards: “the lamb ribs are seasoned with a coffee rub … diners can have chicken breasts coated with collard green pesto.”

The open kitchen lets customers watch as the smoke masters create their magic. If you can’t make the tough decision on what to eat, sample them all. Choose your sauces: Carolina Mustard, Chicago Red or Whiskey BBQ. At L&OBBQ. Any decision you make is the right decision.

Hippin Hops Brewery & Oyster Bar, Georgia’s ﬁrst Black-owned brewery, has put stakes down in the East Atlanta Village district. Co-owners Donnica and Clarence Boston are the visionary pioneers whose signature ales and lagers have made their brewery/restaurant a go-to hub in a burgeoning neighborhood where the nightlife buzzes. Their three-barrel brewhouse produces a variety of handcrafted beers made with fresh, all-natural ingredients.

HHB&OB suds are the main attraction for the hip-hop crowd that gathers and parties. But the place has another secret weapon: Fish! Executive Chef Jamarius “J.” Banks, a former contestant on Food Network’s “Beat Bobby Flay,” turns food from the ocean and lakes into delectable dishes with a supreme focus on oysters served in ways that surprise and please patrons.

Pull up a chair, stool or stand, sway to the neo-soul music and let the beer flow where it may.

MUST-SEE PLACES & THINGS TO DO

2. Learn about our past at The National Center for Civil and Human Rights.

3. Get cultured at High Museum of Art with shows like Calder-Picasso.

5. Rest your head at the trendy Wylie Hotel located in the Old Fourth Ward neighborhood.

7. Follow the late-night crowd for a dessert ﬁx at the Sugar Factory and grub on Red Velvet Cake.

11. Lodge at Loews Atlanta Hotel, its walking distance to museums and has the Exhale Spa.

12. Have drinks and dinner at the Lowes lobby restaurant Saltwood Charcuterie & Bar.

14. Visit the birth home of Martin Luther King to see where he grew up.

15. Ride on top SkyView Atlanta, a 20story Ferris Wheel in Centennial Park in a gondola.

16. Drive down Buford Highway to the La Pastorcita Mexican restaurant for their Enchiladas Verdes.