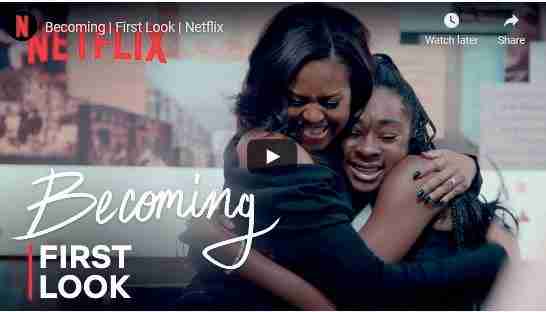 (Black PR Wire) – “Becoming” is tied to Obama’s bestselling book of the same name, published in 2018. The ﬁlm, directed by Nadia Hallgren, follows Obama across 34 cities for her book tour. It features the former First Lady as she speaks to everyday Americans and shares what she learned during her husband’s two terms as president.

“Those months I spent traveling – meeting and connecting with people in cities across the globe – drove home the idea that what we share in common is deep and real and can’t be messed with. In groups large and small, young and old, unique and united, we came together and shared stories, ﬁlling those spaces with our joys, worries, and dreams,” Obama wrote in a press release.

“We processed the past and imagined a better future. In talking about the idea of ‘becoming,’ many of us dared to say our hopes out loud.”

The former president and First Lady signed a deal with Netflix and began their own production company, Higher Ground, in 2018.

Prior to “Becoming,” the pair released their ﬁrst ﬁlm, “American Factory,” which won the Best Documentary Feature Oscar. They were also involved in Nicole Newnham and James LeBrecht’s documentary about camp teens with disabilities, “Crimp Camp.”

Obama talked about what she hoped the release of her documentary would do for everyone self-isolating during the COVID-19 pandemic.

"I treasure the memories and that sense of connection now more than ever, as we struggle together to weather this pandemic, as we care for our loved ones, tend to our communities, and try to keep up with work and school while coping with huge amounts of loss, confusion, and uncertainty," she said.

"As many of you know, I’m a hugger. My whole life, I’ve seen it as the most natural and equalizing gesture one human can make toward another – the easiest way of saying, ‘I’m here for you," she wrote.

"And this is one of the toughest parts of our new reality: Things that once felt simple – going to see a friend, sitting with someone who is hurting, embracing someone new – are now not simple at all."

She concluded her announcement in a way that gives us a good sense of what the tone of her documentary will be – inspiring and optimistic.

"But I’m here for you. And I know you are here for one another. Even as we can no longer safely gather or feed off the energy of groups, even as many of us are living with grief, loneliness, and fear, we need to stay open and able to put ourselves in other people’s shoes. “Empathy is our lifeline here. It’s what will get us to the other side. Let’s use it to redirect our attention toward what matters most, reconsider our priorities, and ﬁnd ways to better remake the world in the image of our hopes," she said.

"Even in hard times, maybe especially in hard times, our stories help cement our values and strengthen our connections. Sharing shows us the way forward. I love you and miss you all."