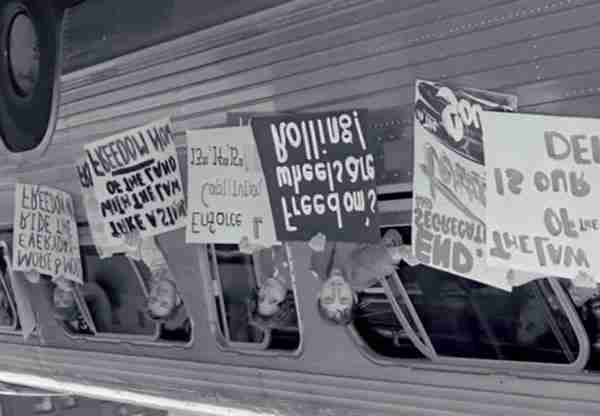 Montgomery, Ala. (AP) – Bernard Lafayette Jr. remembers the blood, the screams and the pain inflicted on Freedom Riders in Montgomery.

He remembers the beating he and others took nearly 59 years ago for testing new laws against segregation.

“We succeeded because we were nonviolent,” said Lafayette, a 79-year-old Tampa native. “Martin Luther King set the example for us in Montgomery.”

But being nonviolent in the face of vicious attacks has a price. Lafayette said he has a “complete emotional disconnect” from his memories of the white mob’s attack at the old Greyhound bus station on South Court Street downtown.

“I know the facts of what happened,” Lafayette said. “I have a feeling about it. But it’s like it happened in another world.”

For years afterward, even while working at nearby Alabama State University, Lafayette said he avoided that section of the city. “I never had any inclination to even go down that street,” he said.

He’s moved past that, and has been invited time and again to speak at the Freedom Riders Museum, which opened in 2011 on the site where he and others were brutally attacked for promoting integration on interstate bus travel.

Lafayette’s civil rights work began before the mob attack, and continues decades later. Among his highlights is working with others to desegregate lunch counters, including the one at the bus station. As a part of the Student Nonviolent Coordinating Committee (SNCC), he registered young blacks to vote in Selma. He also helped produce new local leaders there for the movement.

WHILE MEDGAR WAS SHOT On June 12, 1963, the same night that fellow civil rights leader Medgar Evers was shot to death, Lafayette was beaten again by a white man while registering black voters.

Lafayette was among the planners for the Selma-to-Montgomery Voting Rights March in 1965, where peaceful marchers were attacked by lawmen.

One of King’s top aides, Lafayette was one of the last to talk with him before King’s assassination in 1968.

In 2016, Lafayette was given the Mahatma Gandhi International Award for Reconciliation and Peace.

Thursday’s program at the Freedom Rides Museum is free with paid admission. Signed copies of Lafayette’s memoir “In Peace and Freedom: My Journey in Selma” will be available for purchase.

Invariably, guests at these events ask Lafayette what made him continue in civil rights, knowing how dangerous it was.

“The thing that motivated me personally was the fact that I grew up in the South. I was aware of these kind of situations,” Lafayette said. “I felt that change could come.”

After the Montgomery Bus Boycott ended in 1956, Lafayette said black people would often ride integrated city buses to get to segregated interstate buses. Court rulings were already in place that outlawed this kind of segregation, but they were often ignored.

In general, black people were expected to regulate their own seating and move further back in as new white passengers boarded. But no matter where black passengers sat, they were often moved at the whim of the driver.

“There was a very mixed kind of policy,” Lafayette said.

Lafayette said the thing that continued to motivate him and other leaders like John Lewis is that they believed change could come. But they couldn’t just wait for change. The time was right to seize the opportunity.

Over the Christmas holiday in 1960, Lafayette and Lewis decided to integrate a Greyhound bus they were taking home from Nashville. Over the protests of the driver, they sat in the front of the bus on opposite sides. Lafayette was behind the driver’s seat.

The driver tried to get Nashville police to force Lafayette and Lewis to move to the back, but police wouldn’t get involved.

“He (the driver) was very upset,” Lafayette said. “He got on the bus, rammed his seat back and put a hole in my suitcase.”

Testing integration laws for public facilities came naturally for 20-year-old Lafayette in 1961. He knew the risks he’d face, since Freedom Riders had already been brutally attacked during Sunday bus rides on May 14 in Birmingham and Anniston.

Six days later, Lafayette said a new group of Freedom Riders secured a Greyhound bus and state protection with the help of then-Attorney General Robert F. Kennedy. This group of 21 was made up of men and women, black and white, students and activists. Lafayette and Lewis were among them.

“It was very quiet that day. It was a Saturday. Usually, you have a lot of activities going on in Montgomery on Saturdays. We thought it was suspicious for it to be that quiet.”

Lafayette told other Freedom Riders to make sure they had a partner when they got off the bus, and to meet at First Baptist Church for a mass meeting that night if they got separated.

“We ﬁnally got to the bus station, and the riots that we had expected to be there were not there,” Lafayette said.

When the bus came to a stop at the station, Lafayette said the driver and their escort disappeared. “They abandoned the bus immediately,” Lafayette said. “They left the door open for us to get out.”

Media had arrived at the station earlier on another bus to record this stop for the Freedom Riders. They were the ﬁrst to be attacked by an armed white mob.

“A mob came out of the bus station, ignored us and went straight to the media,” Lafayette said. “They started beating up people.”

Lafayette remembers one newsman who was knocked to the ground and had his camera smashed. Others had their cameras taken from them. It was a calculated move. Freedom Riders had already gained a lot of attention in the national media. In an era that had no instant communication, the mob’s goal was clearly to silence the message.

Understandably, Lafayette expected the worst. His ﬁrst thought was to try to get two of the female passengers into a nearby cab,”`so at least somebody would survive.” Unfortunately the cab driver, who was black, jumped out of the vehicle. The driver was afraid to drive the white women anywhere. “He was shaking like a leaf,” Lafayette said.

Since escape didn’t seem like an option, the Freedom Riders joined hands and began to sing “We Shall Overcome.”

“While we were doing that, that’s when the mob came for us,” Lafayette said.

Lafayette remembers one white male Freedom Rider who was sent over a rail and knocked out, and then the unconscious man was knocked over the rail at least four more times.

“They stood him up and knocked him over again,” Lafayette said. “All his teeth were knocked out in the front.”

Lafayette said he saw Lewis get struck over the head with a cola crate, causing a gash.

The mob didn’t limit itself to the media and Freedom Riders. Lafayette remembers an older black man, who was just walking down the street with a cane. “They snatched his cane and knocked him over the head,” Lafayette said. “They were just going wild.”

When the mob came for Lafayette, he went down on his knees to avoid being kicked in sensitive areas. “They kicked me in the chest and broke three of my ribs,” he said.

Lafayette said there was a drop off with a rail at the bus station, with a parking lot at the bottom. “They were going to push me over that backwards, because I was backing up,” he said. “Rather than allow them to push me backwards, I turned around and jumped over the rail. I landed on a car. There were three others that followed me.”

There was a post ofﬁce nearby, and Lafayette took refuge there. The mob didn’t follow him onto federal property.

Toward the end of the violence, Montgomery police ﬁnally arrived to put a stop to it.

That evening, the beaten Freedom Riders and 1,500 people came together at First Baptist on Ripley Street. Outside, the church was surrounded by another mob of around 3,000. They busted the church’s stained glass windows with rocks. Those inside feared someone would bomb the church.

Further away, a group of black cab drivers were considering an attack on the mob. King got word of it. He and a small group risked walking out through the mob to meet the cab drivers and convince them not to attack. Nonviolence was key to their movement.

With the help of the Alabama National Guard the next morning, those gathered in the church were able to leave unharmed.

“I’m surprised that people didn’t get injured even more, or that it wasn’t fatal,” Lafayette said.

The journey toward New Orleans continued on May 23, 1961. They left Montgomery into Jackson, Miss., where the Freedom Riders were immediately arrested and jailed the next day.

A week later, A.G. Robert Kennedy petitioned the Interstate Commerce Commission to enforce desegregation for interstate travel. By Nov. 1, 1961, the ICC ruled that all terminals and bus transportation must be integrated.

Next post Bishop Jacob Cohen: A visionary son of the Church