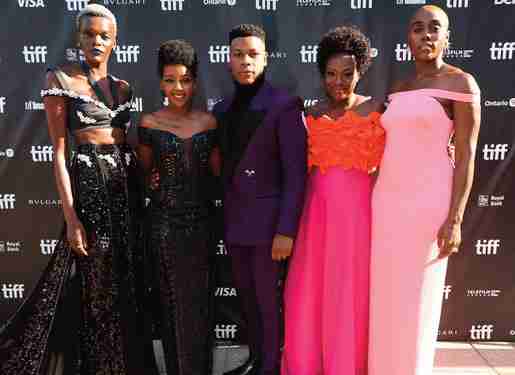 The mighty women of the Agojie were warriors. From the 1600s to1800s in the West African Kingdom of Dahomey this all-female military regiment gallantly fought their empire’s enemies.

Film fans first glimpsed the Dahomey Amazon legacy in the Marvel movie “Black Panther,” in which the Dora Milaje special forces in the fictional nation of Wakanda were modeled after those fighters. So, an introduction has already been made.

On a visit to Benin in 2015, actress/producer Maria Bello encountered the legend of the Agojie, fathomed a movie, and with screenwriter Dana Stevens, crafted a fictionalized story of true-life female combatants.

Other corroborators include filmmaker Gina Prince-Blythewood, who researched the women, culture and era, adding her insight; Oscar-winning actress Viola Davis and her production company; and producer Cathy Schulman (“Crash”). The project is largely a female and POC effort. In 1823, in a region that is now Benin, Gen. Nanisca (Davis) leads a military regiment that serves at the pleasure of young “Ghezo (John Boyega). Her women and girls help protect the embattled kingdom of Dahomey from neighboring adversaries like the Oyo Empire, led by the murderous Oba Ade (Jimmy Odukoya) and from White Brazilian enslavers, commanded by Santo Ferreira (Hero Fiennes Tiffin). Their mission also includes freeing and releasing captured Africans headed for slave ships.

The wise Nanisca is aided by her top officers, the courageous Izogie (Lashana Lynch, “No Time to Die”) and very nurturing Amenza (Sheila Atim, “The Underground Railroad”). Girls and women vie to enlist in their army. Nawi (Thuso Mbedu, “The Underground Railroad”), an abused and orphaned adolescent, is among the candidates competing for a position in a troop that’s comprised of virgin women who eschew marriage and men. Nanisca eyes the rebellious aspirant, who doesn’t always follow orders but shows no fear and exhibits leadership qualities. The two spar physically and verbally. Nawi: “They say that the soldiers are magic. But you look like an old woman to me.” Conflict and warfare rages around them.

The script sets the premise, time and location. The soldiers, kings and enslavers are large on the page, and even grander on a movie screen. Bigger than life. The rivalries, betrayals, palace intrigue, romances, mentoring, grudges, ferocious battles and subplots are as epic and mythical as those in the “Gladiator” or the “Star Wars” sagas. The topical theme of fighting oppression is evident in the war against enslavers. The righteous movement to protect others from human traffic”and subjugation is galvanizing. Black history buffs may know that some African tribes were complicit in the slave trading industry. Others maybe not. This can be a learning experience. Nanisca to the King: “Let us not be an empire that sells our people!”

The king’s dwelling, the village and port towns (shot in Cape Town, South Africa) look regional and historic due to Akin McKenzie’s (“When They See Us”) production design. Costume designer Gersha Phillips (“Star Trek: Discovery”) enhances the pageantry with lavish robes that drape the “and his wives and adds to the Agojie’s fiery personae with uniforms that highlight their lean physiques. All visuals are framed to perfection by cinematographer Polly Morgan. When sequences need more drama, romance or thrills, Terence Blanchard’s score ups the ante. While editor Terilyn A. Shropshire (“When They See Us”) makes two hours and 15 minutes roll by in seconds.

Writing and directing romantic dramas (Love & Basketball) and segueing into badass superhero films (The Old Guard) primed Prince-Blythewood for this feminist fable. Like an artist and a shaman, she creates an atmosphere steeped in culture and history. Along with the extraordinary stunt choreography, she makes the fight scenes chaotic, balletic and glorious. Under her guidance the palace drama seems royal and dire and the romance between Nawi and the Brazilian Malik (Jordan Bolger) is enchanting. Her creativity and versatility are on view throughout.

Viola Davis is magnetic, intense and powerful as the commanding general. She heads an ensemble that milks their character’s emotions (innocence, anger, fear, romance) and adds human portraits to the story of slavery, especially for those who fought against it. The King: “Sometime a mouse can take down an elephant.”

A huge spectacle. A fictional action drama steeped in history. African in nature but universal in its depiction of greed, suppression and tyranny. A deft team of female artists have masterfully created a feminist allegory that will excite and inform movie lovers for years to come.

“The Woman King” premiered at the 2022 Toronto International Film Festival and won a standing ovation. Among a stellar group of diverse films and voices, it still rose to the top.