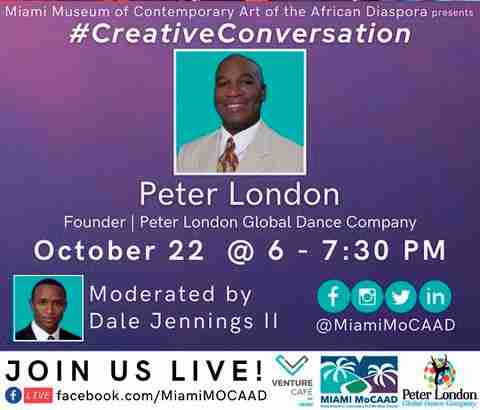 There are many ways to advocate for social and political change. Some engage in peaceful protests or petition the courts, while others use education or art as tools for liberation.

The conversation will cover his journey as an agent for social change from Trinidad and Tobago to The Juilliard School, Martha Graham Dance Company, The Alvin Ailey American Dance Theater to his founding of the Peter London Global Dance Company.

This year’s virtual Annual December Adrienne Arsht Center world premiere will include a dance adaptation of Marilyn Holiﬁeld’s chapter, “Roses From My Father, My Mother’s Dreams" in the collective memoir, “Seven Sisters and a Brother: Friendship, Resistance, and Untold Truths about Black Student Activism in the 1960s,” which is set at Swarthmore College.

The conversation will also cover his creative process for the expanded version based on the entire book planned for 2021.

Dale Jennings, II, a Miami native, a graduate of Miami Northwestern Senior High School, Swarthmore College, and the University of Pennsylvania Law School, and collegiate choreographer and dancer, will moderate the conversation. It can be viewed at facebook.com/miamimocaad.

This Creative Conversation is a Miami MoCAAD collaboration with Venture Café Miami.

As a child of 6 years of age in Laventille, Trinidad & Tobago, our neighborhood was home to a family that practiced the West African Yoruba religion of the Orishas. Our cousin, the late Andrew Bedeau from Carriacou, Grenada, and at the time, the Caribbean’s greatest drummer of the retention of West African dance and music, was the celebrated lead drummer at the ceremonies. During the breaks in the proceedings, the children who wished to were allowed to mimic the adults’ dancing. I was so mesmerized by the electrifying dramatic dancing and phenomenal music and chanting that I always took the opportunity to demonstrate what I observed.

How did you decide that you wanted to make a career out of dance?

At age 12 years, a new youth center just across the street from where I lived offered professional training in West African secular dance, and I jumped at the opportunity because I loved the music and the driving energy and sense of freedom that dancing brought more than playing cricket, football and basketball.

At age 14 years, my teacher and mentor Esaw Frazer, a former soldier, a great drummer, and dancer, took me to the Barataria Folk Dance Group (BFDG), one of Trinidad’s leading dance companies. I could not join because I was told that I was too young to return when I was 16 years.

I returned once I turned 16 years, and the following year I performed with the company on my ﬁrst trip to America at the Dallas, Texas International Trade Fair as part of the Government’s cultural contingent with the ﬁrst Black Ms. Universe, Trinidad’s Janelle Penny Commissiong.

Following the tour, I became a member of the leading contemporary dance company, The Astor Johnson Repertory Dance Theatre (AJRDT) of Trinidad & Tobago, toured in the United States. Simultaneously, I began training with the Caribbean School of Dancing under the direction of Patricia Roe and successfully passing my Royal Academy ballet exam. International tours continued with BFDG and AJRDT.

At age 18 years old, I won the Prime Minister’s Best Male Dancer Trophy with the BFDG in the annual national Folk Dance Competition. The following year I was appointed the BFDG dance director and choreographer. The Alvin Ailey 3rd company, led by the late former Ailey principal and Trinidadian Kelvin Rotardier, brought the company to Trinidad in 1982, and I was utterly blown away and inspired to become a full-time professional dancer by moving to New York to study at the Juilliard School and then audition for Alvin Ailey.

It turned out that Alvin Alvin Ailey was setting one of his pieces in my freshman year at Juilliard and invited me to dance with his company. I turned his offer down to complete my study at Juilliard, so instead, he gave me a full scholarship to the Ailey school. After graduation with honors from the Juilliard school, I worked with the Jose Limon Dance Company, and then the Martha Graham Dance Company becoming a principal dancer and artistic associate, senior. Alvin said to me when I went to tell him that I was going with Martha Graham, that to come back if it did not work out and that the Ailey door was always open for me.

What’s it been like owning your own dance company, and why did you create it?

After fulﬁlling my professional performing career, I planned to create a dance company to create a repertoire by fusing my West African dance experience with classical ballet and American contemporary dance techniques. While teaching at the New World School of the Arts, I was invited to teach at the African Heritage Cultural Center and Dance Empire in Pinecrest. My students at the African Heritage Cultural Center and their parents would continually ask me to create an Alvin Ailey-like dance company for them in Miami. I declined, as I did not know anyone who would support what it would take to build a company of that level.

Ten years passed, and I decided to go for it with promised support, which did not materialize. Then support came from the Knight Foundation and the late Victoria London, honorary consul of Romania, with additional help from a crew of dedicated friends and professional consultation from Antonia Williams-Gary.

In 2012 I went into my outrageous mode and out of my mind focus. I pursued my belief that our local Miami dancers from Liberty City African Heritage Cultural Center should have the same opportunity as any other group to perform at the Arsht Center, money, or no money! So I boldly went and spoke with Valerie Riles, VP for Board and Government Relations at the Arsht Center, and this year will mark our ninth annual season and always with sold-out houses. I did the same thing when I left Trinidad to go to Juilliard with the promise of a scholarship, which did not pan out and no family in New York, but four years later, I graduated at the top of my class, and the rest is history.

Building my company for the past ten years has been a thrill, with joys of success and the challenges of defeat, along with the obligatory brutal hard work with the usual two hours per night of any real sleep or no sleep at all, as I have often had to serve as the chief cook and bottle washer. For there are those deadly days when some dancers are homeless or without food and transportation, or living and sleeping in their cars during vicious storms, but to see the royalty and the joyous smile of God on their faces when they humbly stand to take their bows after a performance, and after months of brutal hard, relentless and uncompromising rehearsals is worth it.

One of the challenges of owning my own dance company is the lack of sustainable philanthropic support, which is not uncommon in the dance world, especially for a multicultural dance company created for multi-ethnic dancers, especially in the Miami community.

However, I kept going forward because of the enduring love for what I do, my dancers’ passionate desire to have a home to dance and call their own. The example of my mother’s tenacity who managed 11 children with little funds and got up early to feed the exhausted union members my father brought home and who would sleep all over our floor during their ﬁghts to unionize the factories in Trinidad.

And, there is the quiet driving ﬁre of resistance that has been passed on to me from my family (my father Dennis Bedeau, originally from Carriacou, Grenada, was the secretary-general of the Union of Commercial and Industrial Workers of Trinidad & Tobago). He was one of the very big guys who blocked entry to factories when they unionized and fought for workers’ rights. He allowed me at 12 years of age when I asked to join the Black Power marches for equality in 1972; It was exhilarating and frightening at the same time, to be part of that crowd of thousands chanting for change, equality, and fairness.

I also learned to persevere and help others with whatever little I had from the elders in the Yoruba ceremonies and all the acts of resistance that is embodied in their dance, songs, music, and traditions that served them in deﬁance of the brutal adversity of the slave trade and the notorious horrors of plantation life (where if you were caught playing the drum they would cut off your left arm and a second offense would be your next arm, an ear or your nose) and so to, the agony of colonialism and postcolonialism of which Trinidad & Tobago’s ﬁrst Prime Minister Dr. Eric William speaks in his book, “Capitalism, and Slave.”

What can the audience expect from your "Women-Roses-Water" show that will commemorate your 10th anniversary, Dec. 26?

Featured will be several new works created by women with commissioned scores from Jamaican American, Ezra Haugarbrooks, founding artistic director, conductor, and composer of the Ballet and Dance Orchestra. Featured are Sharron Lyn Williams and Annellyse Munroe, both Miami natives and former Ailey II dancers, including Brook Logan, choreographic associate for Alvin Ailey’s resident choreographer, and Miami native Jamar Roberts. One of the premieres is by Miami native and Ballet Hispanico artist Melissa Verdecia, based on the resistance ﬁghters and the murder of the Maribel sisters (La Mariposas) of the Dominican Republic.

My relationship inspires the program with several influential women leaders in Trinidad who served as teachers, mentors, and supporters. Women made up most of my teachers and artistic directors at the Juilliard School, the Alvin Ailey School, the Martha Graham Company and school, and the Jose Limon Dance Company.

My mother passed in 2016, and then there was Sandra Bland, who reminded me of my mother and sisters who struggled to keep hope alive and live free. I was devastated by the losses but inspired to create a program celebrating women.

In 2017 I inaugurated my Women Choreographic Initiative giving our female dancers choreographic opportunities that are not a common occurrence in the dance world. The premiere was met with critical acclaim, a performance collaboration with each of my dancers paired with a female musician from the Frost School of music, for the International Women’s Forum Gala event at the Perez Museum.

Another section of the program is “Men Roses For Women” and my offering to our women who have lost their lives and loved ones and who serve as the anchors of the community and represent the Yoruba Orishas of Yemanja, Oshun, and Oya. One of the solos I have created speaks to Oshun’s protective love of children and Oya’s ﬁerce warrior power in her son’s guardian. The male dancers, including a work by me, will choose a rose that most reflect the love and honor of the women in their lives and create a solo dance based on the color, shape, and scent, which they will share with the composer and jointly choose the instruments that best represent the qualities of the rose for the composition of the music. Due to COVID-19 restrictions, some of the works are being created by dancers in Denmark, Canada, New York, Georgia and Orlando. They will be part of our virtual performance in December.