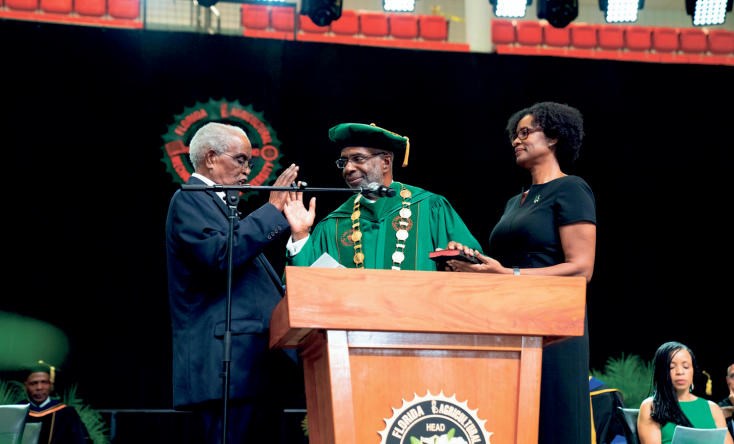 TALLAHASSEE, Fla. – The ﬁrst Black man to serve on the Florida Supreme court has died. Joseph W. Hatchett was 88.

The court announced Saturday that Hatchett died in Tallahassee. No cause of death was given.

Hatchett was the ﬁrst African American on the state high court when he was appointed by then Gov. Reubin Askew in 1975, according to the court.

Hatchett graduated from Florida A&M University (FAMU) in 1954, then earned his law degree in 1959 from the Howard University School of Law,

Hatchett also worked as a federal prosecutor and in private practice.

The Florida A&M University community is mourning the death of alumnus Hatchett, who pioneered a legal career that took him to Florida’s highest court and the federal judiciary.

“Florida A&M University has lost a great son in the passing of Justice Joseph Hatchett,” said FAMU President Larry Robinson, Ph.D. “He went from FAMU to the Supreme Court of Florida during a stellar legal career. I was honored that Judge Hatchett swore me in as the 12th president of FAMU. More importantly, his legacy has paved the way for many in the legal profession. He will be greatly missed.”

Hatchett, who graduated from Florida A&M with a Bachelor of Arts degree. Twenty years later, after retiring in 1999, Hatchett took on another challenge when he joined with the NAACP to be lead attorney in the ﬁght to preserve statewide preference programs for minorities and women in Florida.

The Clearwater, Fla. native served as a second lieutenant in the United States Army and entered Howard University School of Law in 1956, where he earned both his law degree and bar admission.

Hatchett defended his seat on the state’s highest court in 1976 and became the ﬁrst African American to win a Florida statewide contested election in the 20th century, which was the last contested election for the Florida Supreme Court.

Hatchett also was a former member of the FAMU Foundation Board Directors where he served for several years in various roles prior to his term ending in December 2017.