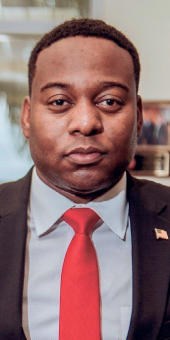 The governor’s quiet decision over the summer to remove Tony’s case from the jurisdiction of Broward State Attorney Harold Pryor followed what sources said was Pryor’s reluctance to ﬁle felony and other charges against Tony as recommended by the FDLE.

The FDLE’s investigation began after Florida Bulldog reported in early May 2020 that Tony signed an FDLE afﬁdavit the prior January declaring under oath that he never had a criminal record sealed or expunged. The story followed Bulldog’s report four days earlier disclosing that Tony shot and killed a man in 1993 when he was a 14-yearold living in a poor Philadelphia neighborhood.

Tony, who has said he killed in selfdefense, was tried and acquitted in juvenile court where all records of his case are sealed, according to a Philadelphia police report the Bulldog obtained. His account of the shooting is disputed by the dead man’s girlfriend, who said the victim was apparently unarmed and that the shooting was prompted by an argument.

One year ago this month, in a twopage afﬁdavit ﬁled in a civil lawsuit against Tony by a political rival who claimed Tony was ineligible to run for ofﬁce because he was a convicted felon, FDLE Inspector Keith Riddick acknowledged the investigation. The accusation was not proved, and the lawsuit was later dismissed.

“FDLE currently has an open active investigation into allegations that Gregory Tony may have falsiﬁed required afﬁdavits associated with his sworn law enforcement ofﬁcer status and/or falsiﬁed ofﬁcial law enforcement employment applications,” Riddick wrote. “The status of FDLE’s investigation remains ongoing as to Plaintiff’s allegations as well as other undisclosed matters that will remain conﬁdential.”

The afﬁdavit went on to state that FDLE was awaiting responses to subpoenas issued “to certain Government Agencies with the State of Pennsylvania requesting disclosure of ofﬁcial court records, law enforcement agency ﬁles and criminal arrest records pertaining to Gregory Tony. Said subpoenas were issued by the Broward County State Attorney’s Ofﬁce.”

The criminal probe of Tony began under the administration of Broward State Attorney Michael Satz, who did not run for reelection. It was handed off to new State Attorney Pryor when he took ofﬁce in January.

After months passed without action on the FDLE’s recommendation that Tony be prosecuted, complaints were lodged with Florida Attorney General Ashley Moody, who later took the matter to DeSantis, sources said.

The Republican governor, who appointed Democrat Tony as sheriff in January 2019, ordered the case be sent across the peninsula to Amira Fox, State Attorney for the 20th judicial district that includes Charlotte, Collier, Glades, Hendry and Lee counties. Fox has assigned it to Assistant State Attorney Anthony Kunasek, head of the ofﬁce’s special prosecutions unit.

On Monday, Kunasek said, “I’m sorry I’m not able to give you any information.”

Paula McMahon, spokeswoman for Broward State Attorney Pryor, was similarly tight-lipped. “Have to refer you to the Governor’s Ofﬁce,” she wrote Monday in response to an emailed question about whether DeSantis provided any explanation for his action. “In other words, if any such records existed they would be conﬁdential.”

Florida Bulldog reported in April that the FBI is also investigating Sheriff Tony for suspected bid rigging, fraud and kickbacks stemming from BSO’s 2019 purchase of hundreds of bleeding control stations from a South Carolina company, North American Rescue, where Tony worked before becoming sheriff. The existence of the probe was conﬁrmed by a trio of sources interviewed by FBI agents about Tony.

A source familiar with the FBI investigation, however, said it has stalled because of internal interference. The interference was allegedly from the ofﬁce’s special agent in charge, George Piro. No further details about it were available.

Next post ‘We don’t want any more black pastors coming in here!’ Defense attorney in Ahmaud Arbury trial objects to Black pastors in the courtroom