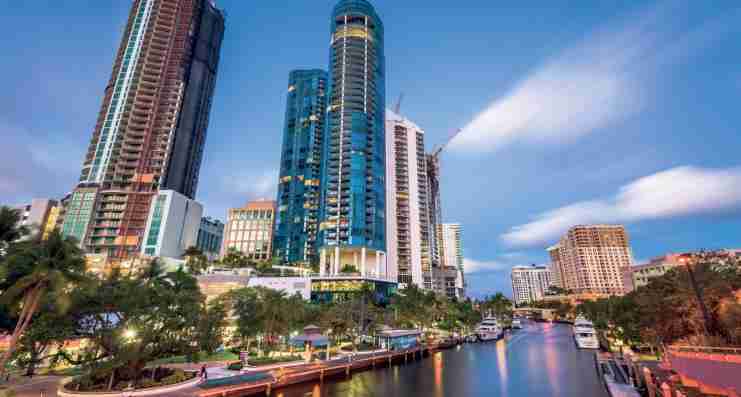 FORT LAUDERDALE, Fla. (AP) – It has been months since we all locked ourselves in our homes to escape the coronavirus, but it has become clear that we’ve learned a new way to live and work.

Recently released sales tax data reveals the extent to which we were forced to change as consumers and as workers after the economy shut down last spring.

Restaurants, the lifeblood of South Florida’s hospitality industry, watched business plummet after dining rooms were forced to close. Bars, clothing stores, salons, bakeries and other businesses were deemed off limits to walk-in customers.

Many of those businesses have since reopened, with changes, but the data from the Florida Department of Revenue also shows that we actually spent more money in some surprising places.

The South Florida Sun Sentinel compared taxable sales data between April and May of 2020 and the same months in 2019. Here’s what we found:

– Meat and poultry market sales nearly doubled in Broward County from $2.1 million in April and May of 2019 to $4 million during the same months this year a 93.2% increase. Some of the increase likely stemmed from beef price inflation and shortages that followed shutdowns of some of the nation’s largest meat processing plants.

Large supermarket chains like Publix struggled to keep their meat coolers fully stocked, and many chains limited how many packages consumers could purchase during a single visit.

That’s when specialty stores like Broward Meat & Fish and Delaware Chicken & Seafood Market took to social media to alert consumers that they had wide varieties of meat available.

Sales increased at Delaware Chicken & Seafood as “people went crazy stocking up on meat and eggs and all that,” manager Linda Cenko said. Customers dismayed by shortages and a lack of variety at supermarkets turned to the retailer, in business since 1951, because “we don’t go through processing plants,” she said. “We own our own farms so we never run out.” Meat and poultry markets in MiamiDade and Palm Beach counties, however, did not experience a similar boost. Sales dropped 15.9% in Palm Beach County and 1.5% in Miami-Dade.

– Skilled crafts flourished in Palm Beach County as sales increased in numerous categories of home and business services. Fabrication and sales of items such as cabinets, wood ﬁxtures, metal doors, frames, molding and trim increased by 29.1% in the county, from $16 million to $20 million.

Fred Johnson Jr., vice president of the family-run Ultimate Fabrication and Welding Services in West Palm Beach, said business never slowed during the quarantine. “We didn’t lay anybody off. We didn’t slow down at all,” he said. “A lot of what we do is big money homes, and those (owners) weren’t really affected.”

Income from machine shops, foundries and iron work increased in all three counties _ by 28.7% in Palm Beach, 15% in Miami-Dade and 5.7% in Broward.

– Paint, wallpaper and hardware dealers in Palm Beach County were also hard at work. It’s the last part of South Florida with signiﬁcant land for new home construction and builders had no reason to stop working at job sites, which remain open to the fresh air until the carpeting goes in. Sales here increased 6.1%, from $32.6 million to $34.6 million, while declining 4.1% in Broward and 2.8% in Miami-Dade.

– Bulldozers kept rolling in Broward. Sales of rock, top soil, clay, sand and ﬁll dirt increased 20.2%, from $3.1 million to $3.7 million, in Broward while dipping in Miami-Dade and Palm Beach. Dirt is essential for all types of construction, whether for new homes on vacant land or new developments where old buildings have been knocked down. Limestone, mined in quarries in southwest Broward and northwest Miami-Dade, is used to build roads. Increased quarry activity is a sign that investors didn’t believe the downturn would last long.

– We didn’t stop eating and drinking in South Florida. We might have done more. Sales at food and beverage stores _ including supermarkets and standalone liquor stores _ increased 4.9% in Palm Beach, 2.7% in Broward, 2.4% in Miami-Dade and 3.7% statewide.